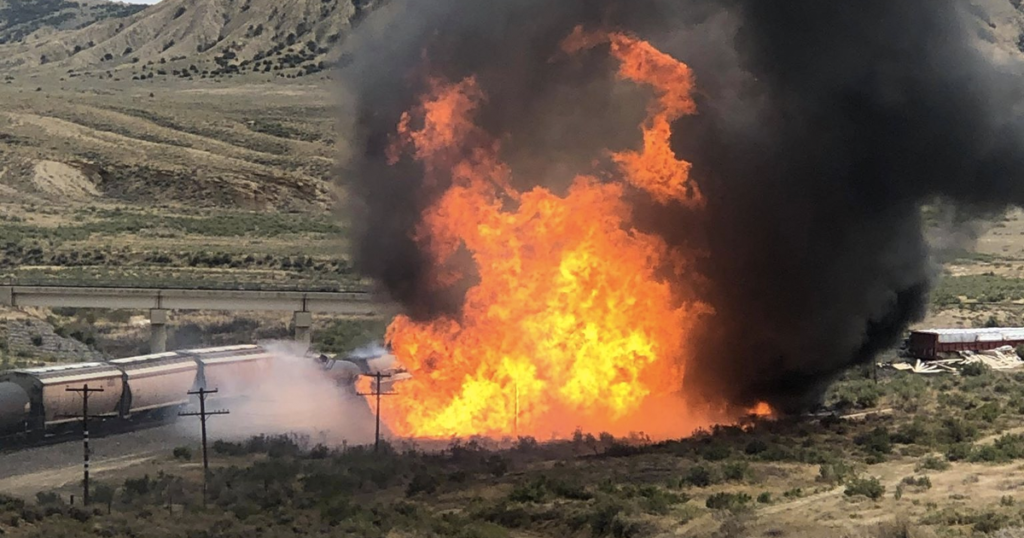 UPDATE — The fire was extinguished around 3:30 am on Sunday. To read the latest details, click here.

UPDATE — Originally, 50-60 train cars were verbally reportedly derailed from a source on the scene. It is now being confirmed by Union Pacific (UP) that 26 train cars were derailed. The UP said that 10 of those cars were either damaged or caught fire.

ROCK SPRINGS — A dangerous fire has broken out near Baxter road on I-80 just outside of Rock Springs.

According to Sweetwater County Fire District No. 1 Fire Chief Scott Kitchner, a train derailment sparked the flames, with 50 to 60 train cars flipping over on their sides. The train cars are completely blocking the main rail line.

Currently, 7-8 train cars of liquefied petroleum gas and alcohol are on fire along with 20 acres of wild land.

Fire District No. 1 is on the scene with multiple units, including the Sweetwater County Fire Deparment, the Bureau of Land Management and the Southwest Wyoming Regional Airport’s rescue truck. Kitchner said that the regional response team for hazmat with the Rock Springs Fire Department is en route also.

“People need to stay out of the area,” Kitchner said. “We have 100-foot flames and have had multiple explosions. This is a very dangerous situation.”

Kitchner said that nobody should come out to look at the fire. He noted that two deputies have suffered burns from the fire.