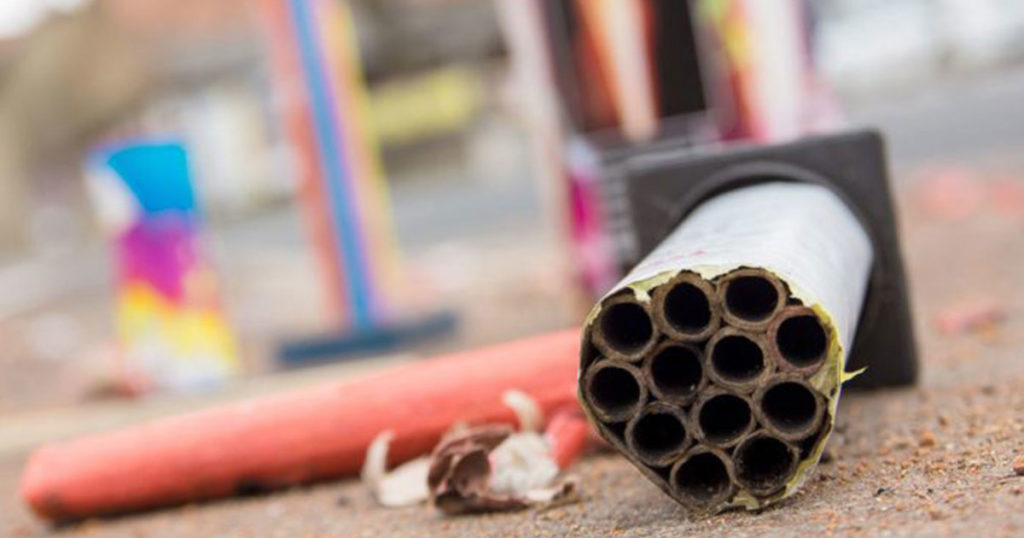 SWEETWATER COUNTY — With the Fourth of July just around the corner and Sweetwater County already seeing dry conditions and abnormally high temperatures, local fire agencies want to remind residents most fireworks are prohibited within city limits and only allowed on certain areas within the county.

Both the City of Rock Springs and City of Green River have ordinances prohibiting the use and sale of fireworks.

Rock Springs City Ordinance 3-301 specifically prohibits the sale and discharge of fireworks in Rock Springs. The only exceptions are toy cap pistols and sparklers, according to Rock Springs Fire Department Chief Jim Wamsley,

“Fireworks are illegal in Rock Springs, on all public lands year-round and may only be discharged outside of city limits on private property with written permission of the landowner,” Chief Wamsley said.

“The best reason not to shoot off fireworks in City Limits is to prevent injury to yourself and those around you,” Chief Wamsley said.

Scott Kitchner, Sweetwater County Fire District #1 Fire Chief, added that shooting off fireworks on county land is prohibited and can only be done on private lands.

“With the land owners permission of course. You cannot shoot them off on state, BLM or other federal lands,” Chief Kitchner said.

Shooting fireworks off on private land, however, does not take liability away from a person or the land owner. Chief Kitchner said fire suppression costs can be steep, so it’s not something a person wants to be responsible for.

“If in the event that your fireworks goes off private lands and starts a fire, you can and will be held liable for any damages caused by the fire and for the suppression costs of putting the fire out,” Chief Kitchner said. “The cost of suppressing a fire can easily reach into the hundreds of thousands of dollars, and go even higher depending on the size of the fire and what type of resources are needed to fight the fire.”

The National Fire Protection Association indicates that 25 percent of all emergency room visits on the Fourth of July are associated with sparklers, many more are due to other fireworks and pyrotechnic devices. Fireworks burn in excess of 1,200 degrees – direct exposure to that temperature will result in severe burn injuries, he said.

“The next best reason not to shoot off fireworks is to prevent fires from occurring. Annually over $105 million in property damages can be directly attributed to fireworks,” Chief Wamsley said. “It is important to know that in addition to personal property losses caused by fireworks, a person causing the fire may also be responsible for the cost of fire suppression as well as property losses incurred from the fire.”

These costs can quickly escalate to the thousands of dollars. When wildfires are caused by fireworks, the costs grow even faster with suppression costs easily exceeding $100,000 in a short time.

“Can you imagine how long it would take you to pay off a million dollar fire? This is a reality that some people have faced,” Chief Kitchner said.

Conditions are extremely dry right now, Chief Wamsley said. The Rocky Mountain Geographical Coordinating Center reports that our area is considered above normal for large fire potential and is projected to be in that state through August at the very least.

“We are very concerned about the potential for fires this July 4th,” Chief Wamsley said. “With precipitation below normal and temperatures above normal, the use of fireworks on July 4th is a train wreck waiting to happen.”

Vegetation from previous years is dry and will easily ignite, while this year’s growth is rapidly drying out and becoming accessible to ignition, Chief Wamsley said.

“Any fire start will quickly grow and spread rapidly. To say that the local fire chiefs are concerned would be putting it mildly,” Chief Wamsley said.

With conditions dry and temperatures being in the 80s to 90s recently, Wamsley had one more plea for residents.

“Although discharging fireworks can be fun, they don’t begin to compare with a professional fireworks display,” Wamsley said. “Please help all of our public safety personnel this year by not discharging personal fireworks.”

Chief Kitchner said Fire District #1 is “extremely concerned” about fires this Fourth of July. With hot temperatures and dry lands, he said the risks are very high.

“We are extremely concerned about the potential for fires this Fourth of July and the days leading up to and after the Fourth of July. With precipitation below normal and above normal temperatures, the use of fireworks is a disaster waiting to happen,” Chief Kitchner said.

Not only will fires start quickly, Chief Kitchner said, but they will spread quickly.

“At that meeting, the fire chiefs along with the BLM agreed that some form of fire restrictions will be needed if the current weather pattern remains,” he said.

This means that residents should be prepared to adhere to fire restrictions that are put into place, due to the dry conditions.

Whether fire restrictions will be put in place, and what kind of restrictions, won’t be known until the next Commission meeting on July 6. However, one thing is for sure, Chief Kitchner said.

“We have the potential to have a very serious fire season.”

Watch SweetwaterNOW.com for a complete list of professional fireworks displays.