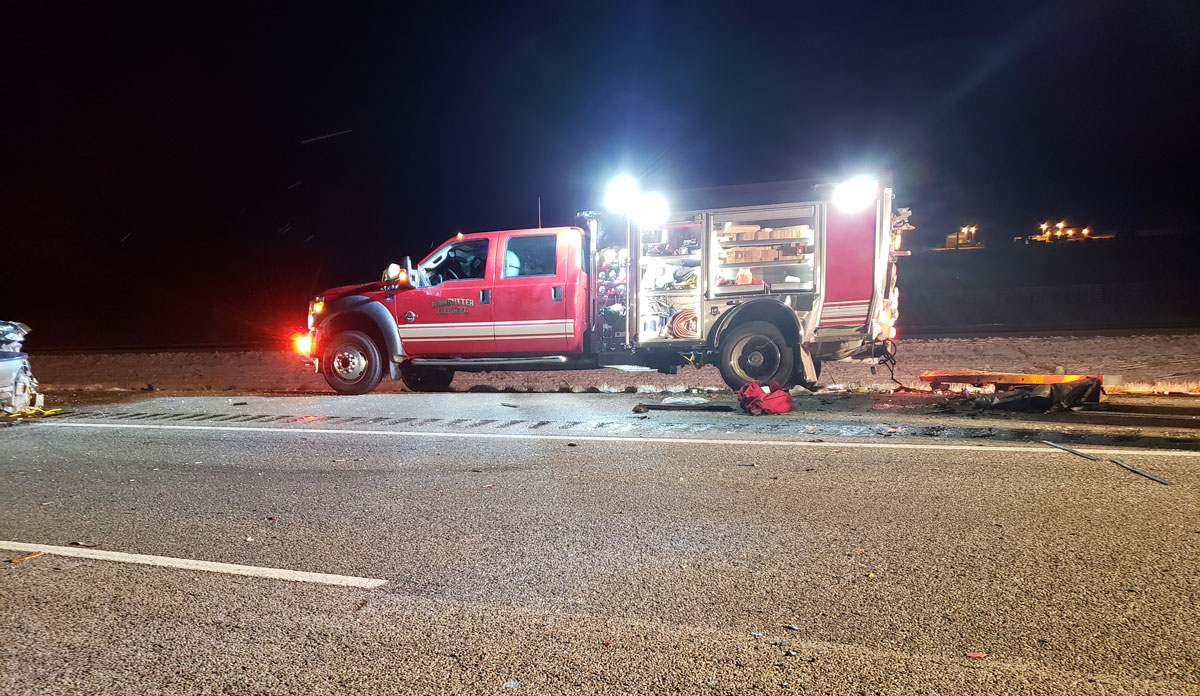 WAMSUTTER– On Wednesday, October 23rd, the Wamsutter Volunteer Fire Department was working an accident scene of a single vehicle rollover off the north side, westbound Interstate 80 at mile marker 170. The pickup truck involved in that incident had just been towed away and the driver had escaped with minor injuries.

At around 8:30 pm, while the Wamsutter Volunteer Firefighters were working around their new Engine 1 to clean up from the scene, a westbound convertible Ford Mustang slid off the highway at highway speeds and rear ended the unoccupied fire engine.

However, the five crew members were all standing in close proximately to the fire engine and two of them were impacted by the Mustang, one by the fire engine which was hit with such force it skidded forward several feet striking the firefighter in the process.

The forth firefighter was slightly injured when we tried to get out of the way of the oncoming car. The fifth firefighter was on the opposite side of the fire engine standing with the driver of the previous accident and neither were injured.

In total, 4 Wamsutter Volunteer Firefighters were injured by the crash. After the Ford Mustang hit the fire engine it careened out into the middle of the west bound lanes where the sole occupant, the driver was now trapped. Without hesitation all of the Wamsutter Volunteer firefighters including all four who had been injured, immediately started extrication and medical aid to the driver who had just hit them. They successfully extricated the driver and he was transported to Rawlins where he was Life Flighted to Salt lake City. His status is unknown.

The road conditions were slightly wet and some ice was forming on the Interstate in the area from several snow flurries. The Wamsutter Fire Engine that was struck was parked all the way off the shoulder of the highway and there were road flares and emergency lights operating at the time of the incident. The fire engine is only two years old and now may be a total loss.

The public is urged to reduce their speeds as we go into winter driving conditions. Please remember that it is the Wyoming State law to reduce your speed and “Move Over” for emergency vehicles operating along the road ways. For the Wamsutter Volunteer Fire Department, this is now the second time in almost 10 years that they have had a fire engine struck and severely damaged while parked on the side of Interstate 80.

“There have been an ever increasing number of Emergency Vehicles struck while operating along the Interstates of Wyoming, especially here in Sweetwater County. We must all work together to improve our efforts to require the travels of our state to slow down and move over for us while we work in this extremely dangerous environment,” Mike Bournazian Sweetwater County Fire Warden said.

“We cannot continue to allow this to become the norm. We need to work closer with our responding agencies, WDOT and law enforcement to create safer work areas for us along the roadways and increase enforcement of the “Move Over” law,” Bournazian said.

“If we do not, the First Responders and Highway Workers of this state will be at a greater risk than ever and the outcomes will not be minor injuries, they will be much worse,” Bournazian said. “And that is too late to make a difference.”