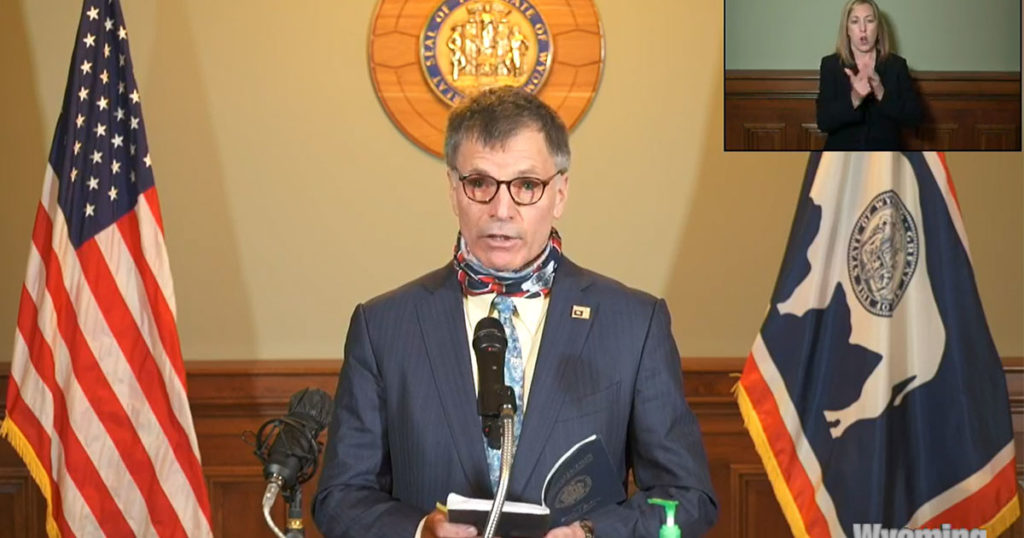 Governor Mark Gordon read from the Wyoming Constitution during his June 4 press conference while speaking on the protests for the death of George Floyd.

CHEYENNE — During his press conference today, Governor Mark Gordon spoke on the recent demonstrations happening both nationwide and in Wyoming in response to the death of George Floyd.

“I want to express Wyoming’s sense of sadness at the killing of George Floyd in Minneapolis. We watched in horror as that man died,” Governor Gordon said.

George Floyd, a 46-year-old black man, was killed by Derek Chauvin, a Minneapolis police officer, on May 25 after Chauvin knelt on Floyd’s neck for nearly nine minutes. This incident was caught on film and outraged the nation and the world, resulting in many global protests for justice.

“The demonstrations that have occurred around the nation and in Wyoming are an outpouring of the outrage that we all feel.”

Governor Gordon said he was proud of the peaceful protesters, as well as the Wyoming police departments who have been respectful of these protests while patrolling them.

“I also want to express how extremely proud I am of Wyomingites around the state who felt it was proper and appropriate and could demonstrate peaceably, did so, in Cheyenne, Laramie, Riverton, Jackson, and Casper,” Gordon said. “I also want to thank our law enforcement officers who have not had to make arrest and who have handeled themselves professionally and with respect for the demonstrators.”

He however did condemn violence and vandalism as criminal behavior. He said any acts of vandalism, such as the defacing of the Wyoming GOP Headquarters in Cheyenne, are “inexcusable” and do not represent Wyoming values.

“When these protests become violent and destructive, they represent criminal behavior. Nothing more,” Gordon said.

“We Must Do Better”

Governor Gordon said that true change is not something that can be implemented by the government and must be brought forth by the people.

“If Wyoming wants to live up to its ideals as the Equality State, we must do better,” he said.

He said Wyoming should stand on the side of equal rights for all, and he read Article 1, Sections 2 and 3 from Wyoming’s Constitution to further this belief.

Article 1, Declaration of Rights, Section 2. Equality of All., reads:

“In their inherent right to life, liberty, and the pursuit of happiness, all members of the human race are equal.”

“Since equality and the enjoyment of natural and civic rights is only made sure through political equality, the laws of this state affecting the political rights and privileges of all citizens shall be without distinction of race, color, sex, or any circumstance or condition whatsoever other than individual incompetency, or unworthiness duly ascertained by a court of competent jurisdiction.”

Governor Gordon said that these words from Wyoming’s Constitution are the values of Wyoming.

He added that he believes all people should feel included in Wyoming and is prepare to work with the legislature on “specific things we need to to do strengthen” inclusiveness and equality in the state.