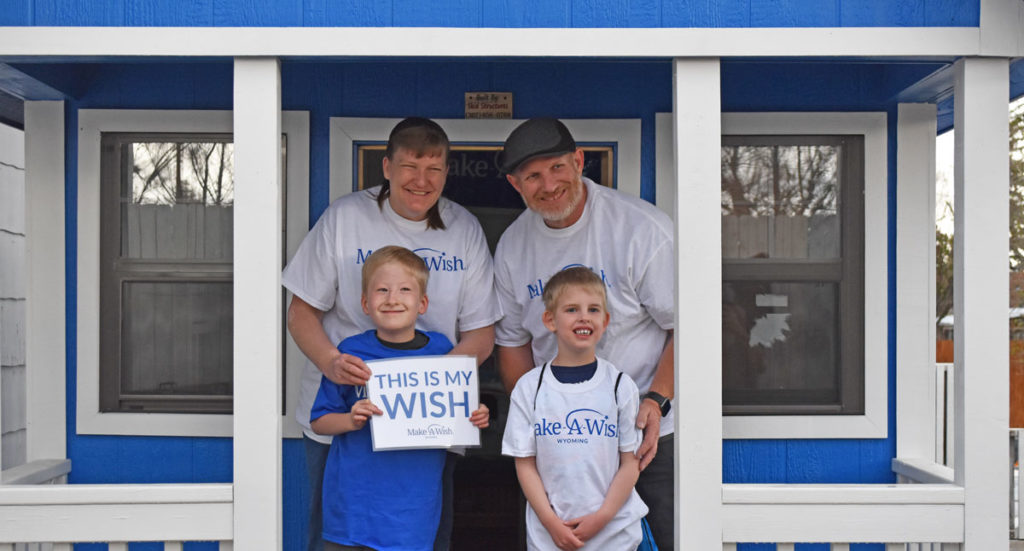 GREEN RIVER — Dreams do come true, and on Wednesday, Solomon Flinders’ wish for his very own playhouse was granted.

Make-A-Wish Wyoming and volunteers rallied together to help make Solomon’s wish for a playhouse come true this week.

Solomon, 8, has Prader-Willi Syndrome (PWS), which is a genetic disorder. His mother Erin Wight Flinders said that due to his disorder, he’s only allowed 900 calories a day and has to take growth hormone shots daily. Solomon has low muscle tone and has to visit a PWS clinic once a year to visit with eight different specialists. He is considered nonverbal, though he can talk some.

“Solomon joined our family just after he turned three and we were able to adopt him six months later,” Erin said. “He was in the hospital for the first two months after he was born, had to have a feeding tube placed, but has since had it removed.”

Solomon’s wish has been in the works for over a year, as COVID-19 interrupted the plans for a while. Since a traveling wish was not an option at this time, the next best thing was a playhouse. Solomon loves having his own space to play, and now he has a whole house just for that. The playhouse is even painted in his favorite color: blue.

“His favorite color is blue even though he’ll tell you purple,” Erin said.

A group of local Make-A-Wish volunteers helped get the house set up and stocked full of toy foods and a toy kitchen. Solomon was excited to dig into all his new kitchen items and show them to everyone around. Even Solomon’s six-year-old brother Daniel got some goodies and toys as part of the surprise.

Solomon enjoying the playhouse with his family.

After playing in his new house for a while, Solomon and his family and new friends headed inside to eat pizza and dessert that was provided by Ric Sugihara, a Make-A-Wish volunteer. Solomon even got a little wild for the special occasion by eating a second piece of pepperoni pizza.

When asked how Erin would describe Solomon’s personality, she said Solomon is “a big tease.”

“Solomon is such a fun loving boy, he loves people,” she said. “He loves Maui from Moana and calls everyone with darker skin, tattoos or long hair Maui. He loves pizza, corn dogs, and his tablet.”

Solomon is currently in the second grade at Harrison Elementary, and he loves going to school and riding the bus. He is also a fan of swimming as he loves the water. Solomon tends to be a pretty big flirt with the ladies.

“He’s our pride and joy, you never know what’s going to happen next with him around,” Erin said.