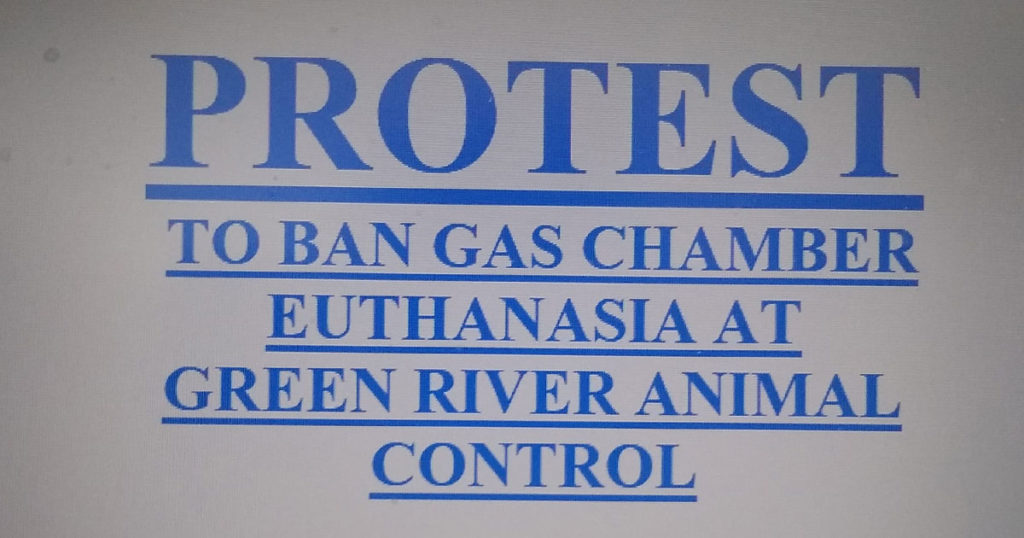 “We decided to get together and collectively request the Green River City Council to help us remove this torture device from the Green River Animal Control facility. The purpose of this peaceful protest is to educate and bring awareness in our community that nothing humane happens to our pets inside of a gas chamber. There is strength in numbers so if you believe in our compassion for our unadoptable pets then please join us in this peaceful protest.”

Following the protest, Green River Mayor Pete Rust brought up the issue, stating that he would like to direct staff to move forward on this issue with the animal control staff’s safety as a priority.

He spoke in favor of getting rid of the gas chambers, “as long as we can ensure our employees’ safety and provide whatever tools that are necessary.” He suggested the city uses tools such as contracts with local veterinarians to help with instances of euthanasia.

The new equipment would have consisted of a cage that holds the animal, auto-injecting sticks for euthanasia injections, and tables that would raise the animal up. However, the Council failed to second the motion in May, resulting in the motion dying.

Mayor Rust said that the HSUS would be willing to provide a grant to help them, and that some of that money could be used to go toward contracts with local veterinarians.

The primary concern the Council had in May was that the gas chamber was safer for the staff than injections, in which they would have to handle sometimes hostile or ill animals.

Green River Police Chief Tom Jarvie said in May that out of the approximate 900 animals the shelter gets every year, about 10 percent have to be euthanized for different reasons such as the animal being vicious, sick, or otherwise unable to adopt out.

Jost said he was hesitant to raise his hand because of a conversation he had with an animal control officer in which they spoke for about 30 minutes regarding the gas chamber.

“I’m not all that sure about it,” Jost said.

No official action was taken during the meeting, but Chief Jarvie will give direction to his staff based on the Council’s unofficial vote, which was 5-2 in favor of moving away from the gas chamber.

Green River is one of two communities in Wyoming that still use a gas chamber for euthanasia, according to Wyoming Against Gas Chambers. The other community is Evanston. Rock Springs removed its gas chamber in December 2020.