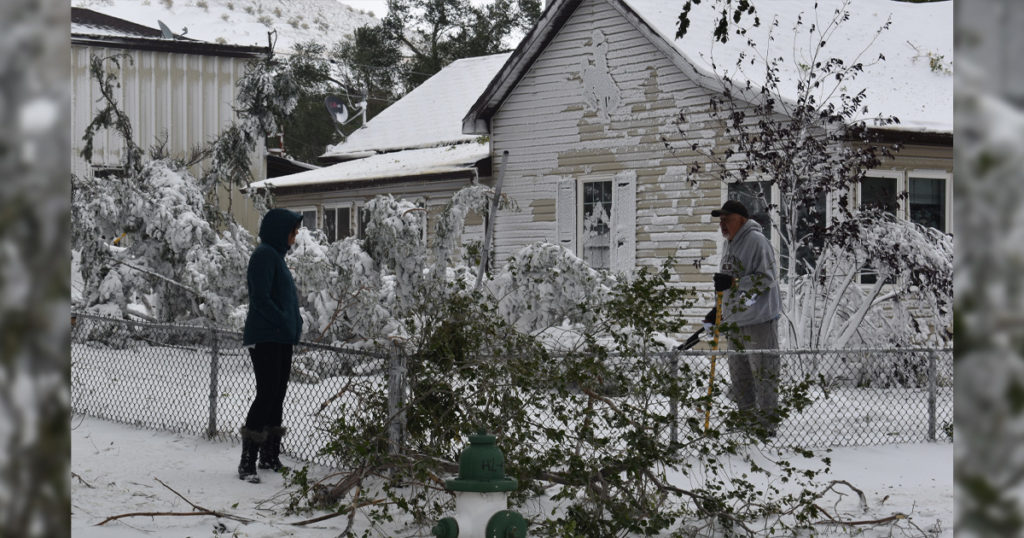 A disaster declaration could provide Green River residents with low-interest loans to help mitigate some of the storm damage.

GREEN RIVER — Green River city officials are exploring the possibility of seeking a disaster declaration from the State of Wyoming in the wake of this week’s torrential snow storm.

City Communications Administrator Steve Core said this afternoon that the process would get started with approval by the City Council, then the county and finally the state. He said the move is not necessarily to get money for the city, but rather for the protection of property owners to secure low-interest loans that could be available for damage restoration.

The City has developed an incident team that’s assessing the damages around Green River this week. Core says that while a final figure has not been calculated, the city estimates “damages in the millions.”

Trees is the Green River cemetery were heavily damaged with 20 of the taller pines coming down. Many of those trees blocked access to the cemetery, but Core said Parks and Recreation Department crews have been “making great progress” and “are ahead of schedule” in clearing the roadway so people can access the area. He said 35 trees in all were damaged at the cemetery

Expedition Academy Principal Ralph Obray told city officials this week that several students will be stepping up to volunteer with clean up of Ever’s and Veteran’s Parks, Core said. He said the city has been very grateful with the full cooperation of residents in handling the disaster after the storm.

Several residents have inquired about cutting fallen trees for firewood. Core said officials don’t object to those gatherings, but residents need to coordinate with the city about where and when they’re planning to take trees.

Core said that Trout Unlimited has made funding available for “bank stabilization” using tree root balls that were completely unearthed by the strong winds. The root balls will be taken to the FMC Barn near Scott’s Bottom and eventually placed along the banks of the Green River to stabilize damaged areas.

He said there are about 100 tree root balls in all that will be redistributed just southwest of town along the banks.

After the storm, Green River set up an area in the rodeo grounds parking lot on Astle Avenue for residents to drop off broken branches. While most residents have been good about just bringing branches, some have tried to drop off other debris.

Core said the area is being monitored and asked residents not to bring trash, leaves, cut grass or other debris because it can contaminate the area which is not designated for trash disposal.

City officials are also concerned about drainage if a heavy rain storm happens with so much debris in the street. Core urges resident not to leave any debris on their property or sidewalks because the city won’t come pick it up and it could cause drainage issues if another storm hits.

The City continues to hire contractors who are helping with clean-up efforts. Core said the city “simply doesn’t have enough equipment” or staff to take care of all the damage. He added the first step in seeking the disaster declaration will be next Tuesday when the plan is presented to the Green River City Council.