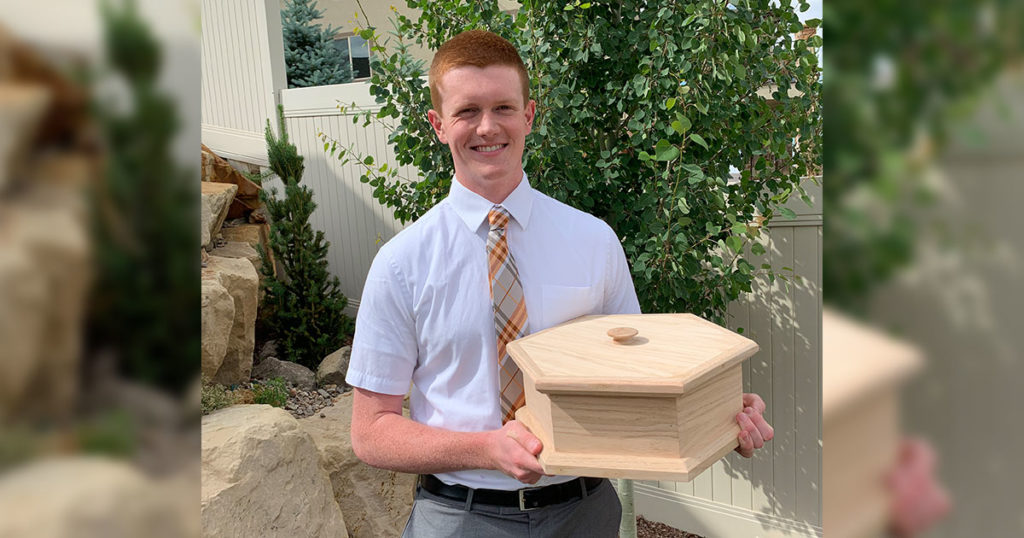 “It was exciting,” Murray said. “I still don’t think that I have grasped the whole ‘national’ part of third place but to see my picture appear on the podium was pretty awesome.”

Murray was the state champion at the state SkillsUSA competition that took place in April in Casper, and that qualified him to compete at the national level, which took place recently.

“Winning the state competition for skills was exhilarating. Going to Casper and competing was so fun and to hear that I won made it that much better,” Murray said.

Murray’s successes have not only made him the first Green River student to be a state champion in cabinetmaking, but he also placed the highest out of any GRHS student at the national level, according to Tim Cassity, GRHS Vocational Education Teacher.

Due to COVID-19 Coronavirus, the national competition was conducted virtually in which students competed in their local school wood shops. Cassity said Murray had to be filmed with two cameras as he made his hexagonal box.

He was given a set of very detailed plans and drawings that he had to follow, and he was given just six hours to finish. The final score was figured using a technical assessment and a professional developed assessment.

“We had to send pictures of his project with a measuring tape next to it so they could check the measurements, so it was very competitive, and he competed against all the state champions from across the country,” Cassity said.

Though it wasn’t the typical national experience, Murray found the silver linings in the virtual competition.

“I was really excited to compete at the national level. Although Covid didn’t allow for me to compete in person, I found it advantageous and less stressful to be on home turf for the competition,” Murray said.

Cassity said that he was proud of Murray’s work and final product, saying that the hexagonal box was “flawless”.

“Cole made a flawless hexagonal box. It was exceptional, and it could not have done better, so I was very proud of him and how well it went,” Cassity said. “He had to make all the jigs for making it as well, so that was very impressive.”

Murray said that he has a passion for building things, and that wood is a natural fit for him to bring his ideas into physical form.

“I love building things and wood is the best material to bring the ideas in my head into the physical world. The best part of woodworking is the freedom to have an idea and just go out in the garage and make it. I find it really gratifying to see an idea become a finished product,” Murray said.

According to Cassity, Murray has an “engineer’s mind” and is able to address each step in the woodworking process with an engineering mindset.

“I really feel Cole has an engineer’s mind and plans, designs, prices, and builds things like an engineer. Cole is an exceptional student in his woodworking and cabinetmaking classes at GRHS, and makes very detailed projects,” Cassity said.

If you ask Murray about his success, however, he gives immense credit to Cassity for his guidance, leadership, and inspiration.

“I would like to thank Mr. Cassity. He is the reason that I was able to compete and be competitive at the state and national competitions,” Murray said. “His passion for woodworking is what inspired me to take my abilities to the next level. He is a fantastic teacher, and none of my success at SkillsUSA would have happened without him.”