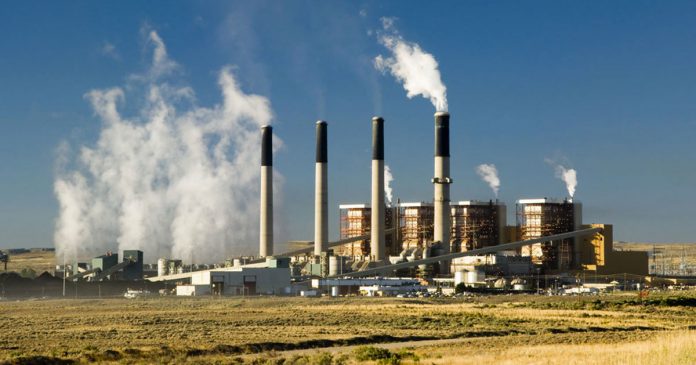 Flue-Gas Desulfurization (FGD) Pond 1 is a 93-acre impoundment pond that holds coal ash. Monitoring for groundwater contamination from the impoundment is done using wells in upgradient and downgradient areas around the pond.

“It’s basically you compare the existing groundwater against any downgradient impacts you can detect from your monitoring wells,” said Rocky Mountain Power (RMP) spokesman David Eskelsen. When downgradient groundwater shows a statistically significant increase in contaminant levels, remedial actions have to be implemented.

RMP has been aware of the contamination from FGD Pond 1 for a long time. “We’ve been monitoring these facilities for decades,” Eskelsen said. “We began sampling with Wyoming DEQ [Department of Environmental Quality] oversight in 1979. As a result of that monitoring, we started seeing some impact to shallow groundwater from FGD 1 in 2002 and an active treatment system has been in place since 2003.”

Eskelsen also noted that the groundwater in question does not pose a threat to human health. “The shallow groundwater we’re talking about is already very low quality. Generally it’s class four . . . so it’s not drinking water, but still you want to determine if any of your facilities are having an impact on that groundwater.”

The contamination from FGD Pond 1 isn’t new, but has been in the news recently; we reported it last year, along with similar findings at two other RMP plants in Wyoming.

Recent interest stems from regulatory changes that date back to 2015. Those changes meant more information on some facilities became readily available. “The CCR rule required all companies that have these facilities to construct a publicly accessible website. . . those websites were required to be in place before January 1, 2018,” Eskelsen said.

The information about FGD Pond 1 might be new to the public, but that doesn’t make it novel. Groundwater contamination isn’t an indication that the plant is operating irresponsibly, but rather a reality of coal fired electrical utilities.

Wyoming DEQ Public Information Director Keith Guille compared the contamination from FGD Pond 1 to the kind of contamination that resulted from many landfills that began operations before Environmental Protection Agency (EPA) regulations existed. “Obviously all of us would like to start 40 years ago and have as much knowledge as we have today, but that’s just not the case,” Guille said.

Construction on Jim Bridger began in 1970, the same year that the EPA began operations.

Eskelsen is confident that remediation efforts currently in place will be satisfactory in addressing the contamination from FGD Pond 1, but says it will take time, “You’re looking at probably somewhere between five and fifteen years to address the impacts,” Eskelsen said. That’s possibly another decade and a half of cleaning up from a unit that has been inactive since 2004.

That timeline isn’t a surprise to Guille, who used an analogy to explain remediation of this sort, “Imagine this: you have a glass of water, drop some dye in it and say okay, go get that drop back. It’s not that simple. It takes time.”

There is currently an open public comment period on the remediation efforts, which closes August 26. People can provide comments to principal Engineer Jeff Tucker by contacting him at jeff.tucker@pacificorp.com.