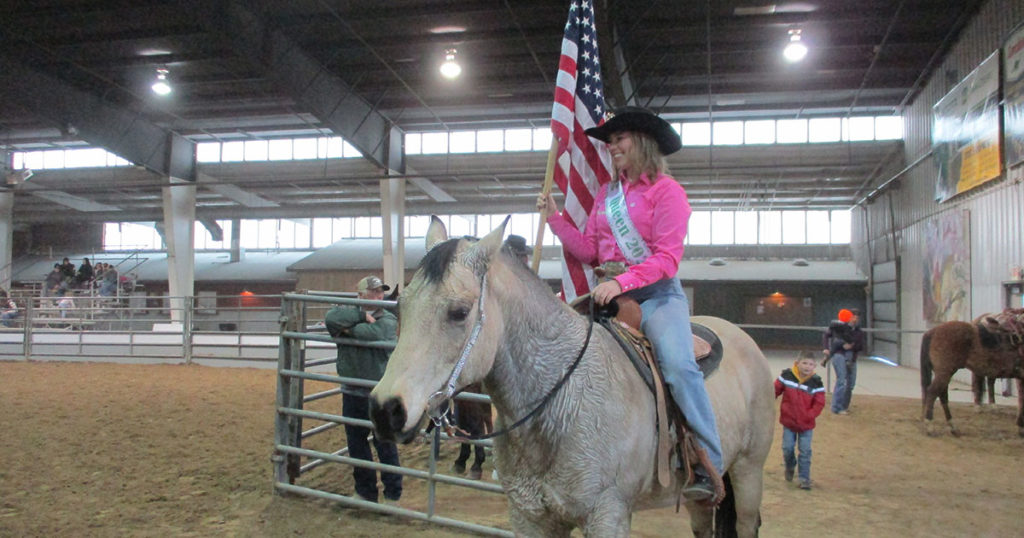 ROCK SPRINGS — Despite the competition from the state 4A football final drawing people out of town, the second installment of the Saturday Wild West Outlaws Gymkhana series on November 13 drew robust participation and some eminently fast times due to some fast horses.

Clocking in at 16.71 seconds around the trio of barrels at the Sweetwater Events Complex Indoor Arena, Bryn Abbott, 14, from Rock Springs, was 4/100ths of a second faster on her horse, Lexi, around the barrels than Kassidy Hewitt, 17, from Mountain View to win the 14-17 age category barrel race competition. Hewitt won the age 14-17 pole bending event with a time of 22.358 seconds and followed that performance up with a blistering 9.595 seconds clock time on her horse, Diva, in the flag race.

In pole bending, riders and their horses must twist and move around six poles each 21 feet apart beginning 21 feet from the starting timer, and do it twice.

Genesis Parker, Rock Springs, had the fastest overall barrels time, at 16.382 seconds on her mount, riding in the 18-39 age category.

Abbott won the 14-17 barrel race by navigating her horse around the third barrel with only a couple of feet of clearance, and then racing “home” approximately 200′ to the timer. Fast, tight turns around the oil barrels without knocking over any of the three barrels and incurring a 5-second penalty represents a better chance for success. Wide turns equals longer times.

Strategies varied. One of the barrel racers, Ali Ward, 15, from Rock Springs, said she and her horse can go in either way to the first or second barrel “depending on whether my horse is a lefty or a righty.”  Ward added that she likes barrel turns within 2-3 feet clearance on her mount.

“I try to line it up,” said Andi Carpenter from McKinnon and a rodeo mom. She added, “But it depends on the horse. If you go straight at the barrel you’ll hit it and knock it over every time.” Carpenter finished second in 18-39 barrels, clocking in at 16.545 seconds.

Hewitt says she has about a four foot clearance from the barrels. “I like to get close but not too close,” she said.

One rider made clear that extra substances for horses have no place in the preparation. “I don’t do a lot of supplements or vitamins with my horses,” declared Taylor Allen, 21, from Lyman and a junior in college. “I feed them alfalfa for the most part and maybe a little bit of grain if they are working really hard for weeks or months at a time. My family has a very holistic approach to taking care of horses. Regular exercise is key. I lope my horses out and keep their lungs and muscles in shape. More often than not it’s the rider that needs more pattern work than the horse. I maybe work the pattern 1 or 2 days out of the week. Horses like routines and they don’t need to be on patterns every day of the week before the race that weekend. Caring for an animal is a huge responsibility. Their lives depend on us. If we fail at taking care of them, it’s the ultimate consequence if they die.” Allen finished third in 18-39 barrels, clocking a 16.814 timing.

For many, though, the competition itself is not so much the purpose at the gymkhana as it is to challenge themselves and enjoy working with their horses at a good, Wyomingish event.

“Our racing is to have fun mostly and be positive competitors,” declared Kelly Westerberg by email, speaking on behalf of herself and her kids, sixth grader Tracie, 10, and Chase, a fourth grader. The Westerbergs are from McKinnon. Kelly added, “Our horses are ranch horses first that are used for rodeos so it helps them be better horses all around. Caring for horses teaches us to think about our horses first and then ourselves.”

Tracie Westerberg finished second behind Hoffman in 10-13 poles, clocking in at 24.47 seconds on her mount. Chase Westerberg notched a 28.373 clocking to win age 7-9 poles and then followed that performance up with a scorching time of only 9.285 seconds in the flag race, which was the fastest time overall in that event or any event that day. Chase grabbed the flag and put it down without a hitch or a miss.

“Tracie and Chase were riding on their own by 3 years old,” mom Kelly declared. “They rode with me since they were babies. They are excellent ranch hands and can move cows by themselves. I can’t do it without them.”

Kelly explained that some horses can do both barrels and poles, and perhaps even do team roping or breakaway roping to keep from growing “soft” or bored with just barrel racing and pole bending.

“Personally, I think the best kind of racing strategy is to try and be better than I was last time,” Allen said by email. “I don’t think about beating other people’s times. I think about beating my last time. I think if someone continually tries to measure up to others they can miss their own personal growth.”

And there are always those whose goal is just to have their mounts make it across the finish line, come what may. Rick Helson, Sweetwater County public defender by day and rodeo contestant by night and weekend, clocked in at a respectable 43.31 seconds in pole bending, considering that the fourth and fifth poles seemed to psych his horse out. “She’s new,” Helson said of his mount. “It’s only her second time running poles.”

The next scheduled Wild West Outlaws Gymkhana is slated for Saturday, December 4, beginning at 9 a.m. Each gymkhana features barrel racing, pole bending and a special event to be determined, for different age categories.

Further information is available by accessing the Sweetwater Events Complex website, www.sweetwaterevents.com/events, or by contacting gymkhana organizer Susan Nichols at (307) 350-2989.

Wild West Outlaws Gymkhana official results for December 13, 2021 are as follows (in order of 1st through 3rd place, with times in seconds):

*Fastest time for any contestant in any event, any age group, for the day.

*Only other sub-10 second rides, any event, any age group, for the day.