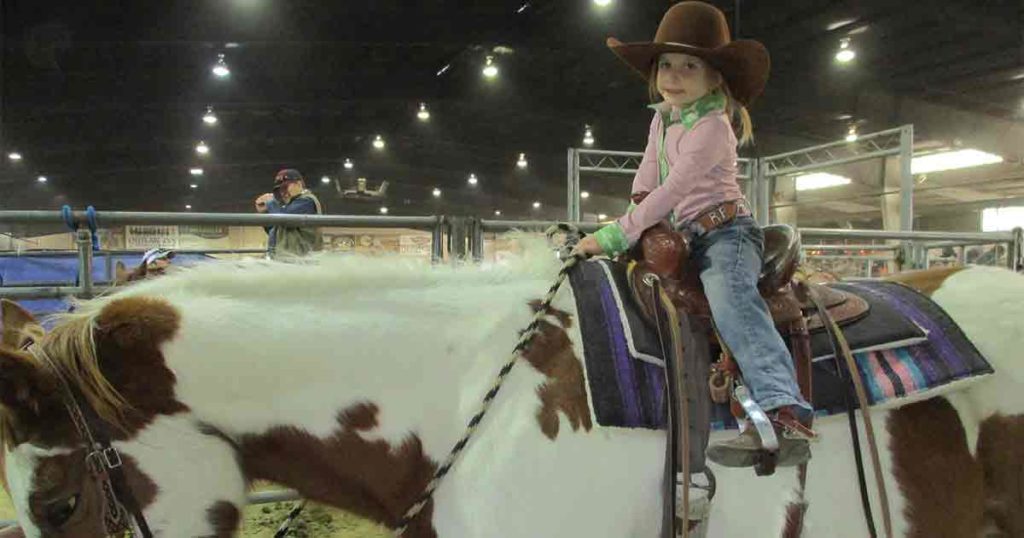 Rainey Potter, 6, McKinnon, was just one of the young riders at the Wild West Outlaws Gymkhana rodeo. SweetwaterNOW photo by Paul Murray

ROCK SPRINGS —The December 4 Wild West Outlaws Gymkhana rodeo at the Sweetwater Events Complex featured for its extra event a four-barrel-wide challenge course with a two-pole gateway for added difficulty tacked on.

In other words, the four barrel, two pole course became a sort of ballet on horseback.

Seven-year-old Chase Westerberg from McKinnon had no trouble navigating the Z course on his mount, completing the course in a no-time-wasted 18.335 seconds. The course was approximately 200 feet in length and 100-feet wide. For good measure, Chase Westerberg also had first place finishes in the age 7 9 barrel race, finishing the course in only 17.57 seconds and in the 7-9 pole bending competition with a timing of just 24.213 seconds, both blistering times for his age group. Chase accomplished his feat by not knocking over any barrels or poles.

Big sister Traci Westerberg, 10, also competed at the gymkhana in all three events, barrels, poles, and the Z course.

No one rider dominated in the 14-17 age competitions, as Sydney Jones topped that age category in barrels (16.409 seconds), Makinsy Huntington in poles (23.1 seconds) and DeEtte Powell, from Lyman, in the Z course (16.51 seconds).

As usual in barrel racing, horse-and-rider worked to get as close to each of the three barrels in the successive elongated figure-8 patterns as possible without tipping over one of the barrels and incurring a 5 second penalty.

“I try to get a horse’s width from the barrel when turning,” explained Savannah Helmetag, 23, from
Rawlins.

Up-and-comer Raygon Peterson, 10, won the age 10-13 barrels competition by guiding her mount, “Mo” around the trio of barrels within 2-3 feet of touching. Peterson, from Rock Springs, clocked a 17.139 timing after racing hell-bent home and then having to stop her horse only a foot from the fence.

Candi Folks from Rock Springs was one rider who had trouble with one of the barrels.

Candi Folks also had two daughters in the rodeo competition, Kyra and Ashton. “They’ve been riding since they were born and so have I,” Candi said of her daughters and herself.

“It’s can be a matter of inches to get around the barrels,” Kelly Westerberg said. She added that the approach strategy to the barrels can depend on the horse, with some horses preferring to come in at an angle to the barrels rather than straight on.

“A little of both (horse and rider) for success,” declared Nakoda Bird, 17, from Fort Bridger. “The horse has to have the ability and the experience, but the rider has to guide the horse.”

“Barrels are a lot more complicated than poles,” Shelby Ames, 18, explained. “In barrels, you have to make sure the horse’s shoulders are squared up and the horse’s head is positioned right. Pole bending is easier because it’s more on the rider to pay attention to where the poles are.” Ames is from Rock Springs.

“It’s mostly the rider’s responsibility,” said Ali Ward, 15, “but if you can get the horse to work with you, it’s both of you.” Ward is also from Rock Springs.

“I’d say it’s 50/50,” declared Scott, one of the more successful local young rodeo riders. “We’re a team.”
Scott’s name is usually at or near the top of the list of the competitions that she enters.

But then again, sometimes a horse can have a mind of its own, and then it is up to the rider to provide the motivation that the horse may be lacking. “Sometimes she doesn’t want to go in,” Peterson said regarding her mount, “and then I have to give her some encouragement.” Peterson said she has been rodeo racing for about three or four years now.

“It’s more the rider than the horse, because the rider does have to be able to train the horse,” declared
Gymkhana Queen Emma Curtis, 17, from Rock Springs. Curtis carried the American Flag during the
opening ceremonies.

The next Wild West Outlaws Gymkhana is scheduled to begin on Saturday, January 8, at 9 a.m., as
always, at the Sweetwater Events Complex. Further information can be obtained by contacting event organizer Susan Nichols at (307) 350-2989. Gymkhanas are also scheduled for February 5 and March 5 to wrap up the 2021-2022 schedule.