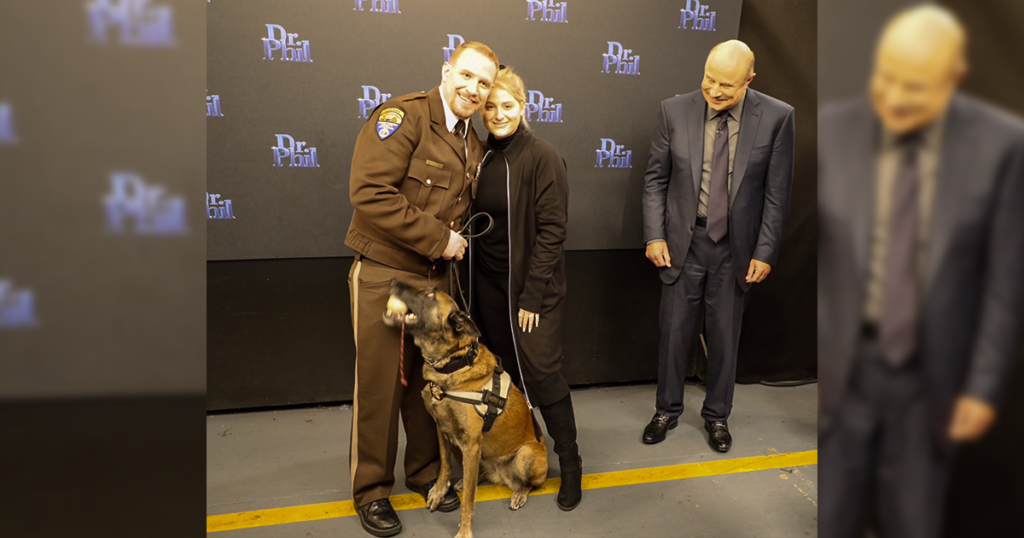 Deputy Derek Morrell and K-9 Jara pose for a picture while in Hollywood. Photo courtesy of the Sweetwater County Sheriff's Office.

SWEETWATER COUNTY — The dedicated men and women of Sweetwater County Sheriff’s Office are proud to announce that their very own, Deputy Sheriff Derek Morrell, and his canine partner, K9 Deputy Jara, will be the featured guests during an upcoming heroes segment on the nationally syndicated Dr. Phil television talk show.

Morrell and Jara have received international publicity, including numerous interviews and a Heroic Dog Award from PETA, for their efforts in successfully locating and rescuing a missing child in Rock Springs last summer.

On a hot late afternoon in July of 2019, the child’s mother reported to police that her four-year-old boy wandered out of the yard while playing with their dogs, that she was looking but could not find him, and that he had been missing for approximately 15 to 20 minutes. After providing a physical description, she further advised that her son suffered some developmental delays that inhibited his ability to speak.

Sheriff’s deputies and officers from the Rock Springs Police Department (RSPD) immediately began canvassing the surrounding neighborhood in vehicles and on foot in search of the missing boy.

Minutes later, Morrell and Jara arrived on scene and deployed from the residence in an effort to track the child by scent. Using an article of the boy’s clothing, Jara picked up a scent almost immediately. After persistently and forcefully dragging her human partner down an alleyway blocks away from the child’s home, Jara adamantly alerted to a locked vehicle parked in the alleyway.

While attempting to secure Jara on her leash, Morrell peered inside the vehicle’s window and found the missing child curled up on the driver’s floorboard. With the help of RSPD Officer Jennifer Chick, they quickly located the vehicle’s owner, opened the vehicle and rescued the boy, who was crying hysterically and sweating profusely but otherwise appeared unharmed. After a precautionary evaluation by emergency medical personnel on scene, the child was reunited with his mother. It was later determined that the boy found the vehicle unlocked and accidentally locked himself in the car after climbing inside.

Late last year, in December of 2019, executive producers from the Dr. Phil show arranged for an all-expenses-paid trip to fly Morrell and Jara to Hollywood for a weekend to film the special heroes segment in front of a live TV audience. While backstage speaking with Dr. Phil after the show, they also met American singer-songwriter and recording artist Meghan Trainor.

The dynamic duo are scheduled to make their nationwide television debut during tomorrow afternoon’s episode of the Dr. Phil show, which airs on Wednesday, September 9 at 4 p.m. MDT on local NBC networks.

When asked about flying to Hollywood to meet Dr. Phil, Morrell said, “Dr. Phil is incredibly kind, and his whole team treated us better than we deserve. Jara was a big hit with everyone we met. It’s an honor and a privilege to get to work with her. Most of the time, I’m on the dumb end of the leash with her leading the way. She’s an amazing asset to our agency and the community we serve.”

Morrell is a 10-year-veteran of the sheriff’s office; he is currently assigned as team leader of the canine program.

Serving since 2016, Jara is a six-year-old Belgian Malinois from K9 Working Dogs International LLC whose acquisition and continued service is made possible, in part, through the use of the agency’s drug seizure fund.