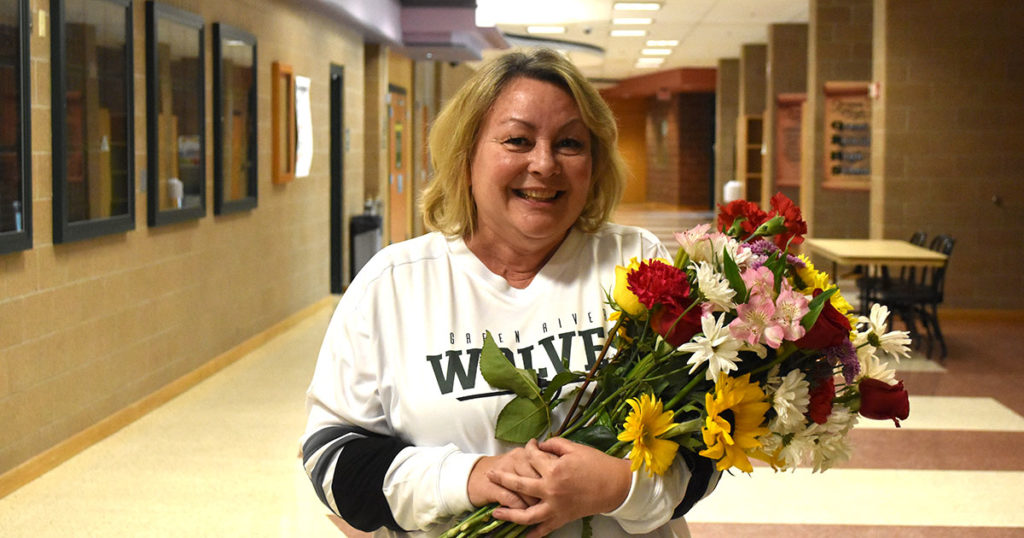 GRHS nurse Michelle Cordova has earned Wyoming School Nurse of the Year, and GRHS celebrated her for this honor on Thursday. SweetwaterNOW photo by Olivia Kennah

Green River High School (GRHS) celebrated Cordova Thursday morning for her award and all of the work she has done to keep students and staff healthy the past few school years amid the COVID-19 pandemic. Cordova has been the school nurse at GRHS for over 17 years, and she is also the nurse at Expedition Academy High School. She has been a nurse since 1985, starting her career in pediatrics.

Students and staff gathered in the main hallway at GRHS to applaud Cordova, congratulate her, and hand her flowers as she walked through the hallway.

The celebration was a surprise so it took some careful planning to pull it off. To get her out of her office so the students and staff could line the hallway, the assistant principals told her there was an injury she needed to take a look at.

However, when she was on her way to take a look at the supposed injury, an announcement sounded over the intercom that announced Cordova as the Wyoming School Nurse of the Year. When Cordova appeared in the hallway, she found the student body and the staff members applauding her.

“It was overwhelming,” Cordova said.

As she made her way down the hallway, students and staff members handed her flowers to show their appreciation, and gave kind words of congratulations.

“I was nominated by a school nurse in Casper so I knew I was nominated, but I didn’t know that besides her letter there were other letters. So that was really surprising.”

She said it was a huge honor to be nominated by people she truly admires, and to be recognized by the students and staff she works with every day.