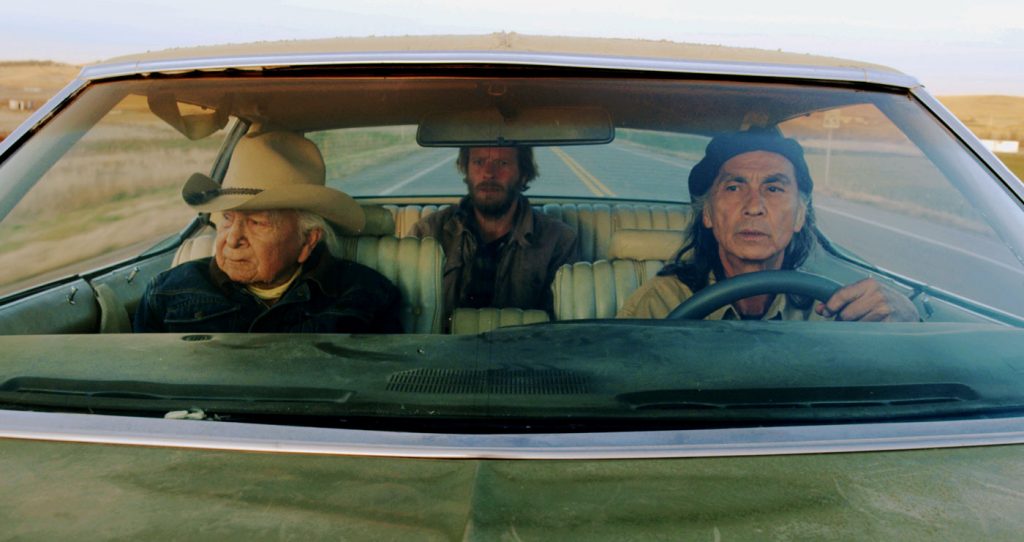 Neither Wolf Nor Dog film still

ROCK SPRINGS—It’s taken 18 months for Neither Wolf Nor Dog to be picked up by a Wyoming movie theatre, yet, just in the span of five to six weeks, the movie has had so much success throughout the state that the distribution in Wyoming is the second highest in the United States.

Neither Wolf Nor Dog will come to Star Stadium 11 in Rock Springs on Friday, October 26, and will stay for at least one week.

“That’s about the size of the biggest blockbuster you can get,” Simpson said.

Neither Wolf Nor Dog has become the most successful non-Hollywood Native American film in a generation.

Simpson explained that a film has never really been released the way Neither Wolf Nor Dog has, particularly through its regional success and the length of the release.

“I’m not giving up on theatres until we’ve exhausted the U.S. market,” he said.

The film has had great success in states such as South and North Dakota, Montana, Washington, and Oregon. With the help of a few kickstarters, Simpson was able to fund the filming and distribution of the film.

“There’s a far bigger responsibility than getting this film financed by financers, in my opinion, because the people are taking a huge leap of faith through crowd funding. It’s been very important to me to repay that,” Simpson said.

Simpson promised Kent Nerburn, the author of the novel of the same name, that he would get the film made, “by any means necessary.”

He made that promise about seven and a half years ago, and after a couple years of getting the film financed, shooting (which took 18 days), and years of post-production and distribution, Simpson has made good on that promise.

Relating to the Film’s Story as an Outsider

Neither Wolf Nor Dog tells the story of a white author who is pulled into contemporary Native American life in the heart of Lakota country in the Dakotas by a 95-year-old Lakota elder and his friend.

“There’s a significant parallel between my own experience and Kent Nerburn’s. There are aspects of the novel and the narrative of the film that was [Nerburn’s] journey, where an elder asked him to distill a lot of his thoughts into a book,” Simpson said.

Simpson said some people might ask why this author would take on such a commitment and task, whereas Simpson said he could really relate to it.

“Over the years I had more people asking me to film various things,” Simpson said. “That spiraled into a 13 year journey making a documentary, ‘A Thunder Being Nation,’ that I made about the reservation on and off over 13 years.”

That is how Simpson became involved in Native American filmmaking.


The Outsider/Insider Perspective on the Narrative of the Film

Simpson explained that the novel is based around the author’s own experience, as an outsider, being introduced to the Lakotas and Lakota country. This is an experience Simpson could relate to greatly, as this was his own experience.

However, he notes that his experience also differs greatly to that of Nerburn’s because Simpson comes into Lakota country as a Scottish man, a foreigner of the United States.

“When I think of Pine Ridge, I think of a place where I laugh more than anywhere else. I think of the hospitality, I think of the people I’ve become close with. But I feel more of myself there, whereas Kent Nerburn holds himself back,” Simpson said.

As a white American, Nerburn is very aware of the tragic history between white people and Native people.

“Kent is very conscious of this sort of shadow on the wall of history in the room, as he calls it. Kent says there is a shadow on the wall when white people and Natives are sharing time and space together, even if they’ve got great friendships,” Simpson said.

However, Simpson has never had that shadow projected onto him. As a European, he said he does not come into Native country with that history.

“That perspective of what was different between the experiences of myself and Kent Nerburn was a brilliant insight for me to figure out how to tell this story,” he said.

Hollywood film producers have been circling Neither Wolf Nor Dog since it was published in 1994, but Nerburn was tentative in giving the story to just anyone.

Simpson explained that Hollywood’s treatment of American Indians throughout film has been “atrocious”.

“I guarantee that if you really study cinema, you won’t be able to find any case in the world of cinema where one group of people was so demonized through cinema,” Simpson said.

“In the late 50s in Germany, you would never get a top comedian in a film saying a line like, ‘My daddy loved killing Jews. He didn’t consider his day complete unless at least one of them bit the dust’. But you can have Bob Hope make that exact joke in the “Son of Paleface” regarding Natives and expect the audience to laugh,” Simpson said.

The exact line Simpson is referring to is Bob Hope’s line, ‘My daddy loved killing Indians. He didn’t consider his day complete unless at least one Redskin bit the dust’.

In Simpson’s essay, “If You Think the Oscar’s Diversity Scandal is Bad, What About Hollywood’s Pro Genocide Cinema?”, he discusses this issue further, including examples with John Wayne in “The Searchers” and Doris Day in “Calamity Jane”.

“We’re talking about the most All-American characters, and they’re laughing about massacring people simply because they’re of a different race. And you see that impact in many ways. I’ve seen it with how my friends are treated in society,” Simpson said.

Simpson said that in more modern cinema, most of the mistreatment of Native peoples comes in the form of simplicity.

This kind of treatment affects how Native people are seen and treated in society, as many people, such as in Los Angeles as Simpson points out, don’t see, nor treat, American Indians as full-rounded human beings. Outsiders only see a snapshot of American Indian people and their lives.

With Simpson behind this film, the audience gets to fully developed Native American representations, rather than stereotypes and one-dimensional characters.

Beyond escaping the Hollywood treatment of Natives, as well as Simpson’s outsider and insider perspective, he said the main advantage of him making this film rather than Hollywood was Dave Bald Eagle, the actor he found to play the elder character.

“When I found Dave Bald Eagle, I knew he was the only person that could play the role. A Hollywood producer would have gone for somebody in their 70s and aged them up. That never would have worked because they never would have had the true essence of somebody from Dave’s generation,” Simpson said.

Bald Eagle was 93-years-old when he and Simpson first met. While working to get the movie financed, Simpson worried about his elder actor’s age.

“Every day that goes by you’re thinking, well if we don’t start filming now, we could end up losing a crucial component to the film that can never be replaced,” Simpson recalled.

That component was Dave Bald Eagle.

Bald Eagle was 95 when they filmed, which Simpson pointed out Hollywood would have never insured an actor that age with a Hollywood film budget on the line.

“I’m an all around filmmaker, so it was possible for me to pull this film together with very little money, and just go and do it and not care about the fact that I have a 95-year-old actor that could even just fall sick at any moment.

“We didn’t have the money in place that would have compromised that,” Simpson said.

Bald Eagle passed away on July 22, 2016, at the age of 97, but not before he was shown a special screening of the film, still in post-production.


The Climax Scene at Wounded Knee: “I’ve been Holding that in for 95 Years”

Simpson said that the fact that he had such a small crew—3 people, including Simpson—and very few actors allowed the shoot to be very comfortable. The small and comfortable shoot allowed Bald Eagle to go to a very deep place because of the trust that was built between the cast and crew.

“In the climax scene, which takes place at Wounded Knee, what was on the page wasn’t as true as what we were getting from filming, so I threw away everything that was written for the climax and had Dave improvise the whole sequence.

“His own people were the Miniconjou Lakota of the Cheyenne River who fled down there and were massacred. He was closer to the Wounded Knee Massacre than even the character he was playing,” Simpson said.

Bald Eagle went into deep personal place, and what allowed him to do that was the trust and intimacy between the small crew. The only people present during filming were the two actors, Simpson, and the sound operator.

“At the end of that shoot, he turned to Christopher Sweeney (actor portraying Kent Nerburn) and said, ‘I’ve been holding that in for 95 years’. And that’s really what he shares on screen,” Simpson said.


Life Imitates Art: The Bond Between the Actors and Characters

During World War II, Bald Eagle was a paratrooper with the 82nd Airbourne. He was left for dead on D-Day as they were mistakenly dropped over German lines.

“We were just like clay pigeons coming down,” Bald Eagle is quoted saying in the press kit. “Most of my outfit was wiped out.”

Christopher Sweeney served four years in the U.S. Marine Corps, fighting in the first Gulf War. He received a Silver Star for gallantry in action.

“The two of them had an extraordinary bond. They’re both noted veterans and there was a lot they communicated on that. They could relate to each other in a way that none of the rest of us could,” Simpson said.

“And that’s what the film is about—the bond between these individuals that gets built and how they learn to understand each other.”

Simpson said the film is in the simplest terms, “an old man’s view of the world”. The story is the elder character’s commentary on human relationships, the environment, and much more.

“However, he is also teaching this younger man how to listen, which is also an aspect of generational commentary more so than cultural commentary,” Simpson said.

A lot of the film is about the personal dynamic between these two main characters, as well as the author coming to terms with his abilities as a writer.

“From a cross-cultural standpoint, it’s very much about facing each other. The elder is placing an incredible responsibility on this other man, and at the end of the day, it’s all about healing. That’s what the elder wants to do—he wants others to learn to heal,” Simpson said.


Taking Inspiration from People and Life

Simpson said he no longer looks to film for inspiration for his own work, but rather looks to his own experiences with others.

“I’m totally obsessed with life and with people. I like to be out encountering people to then inform my work,” he said.

It has been 19 plus years since Simpson first visited the Lakota Pine Ridge Indian Reservation, and he said there is not place on earth he has been more welcomed.

“It’s just been a remarkable journey. I’ve made so many close friends, so many people that became like family to me, and it’s been, quite frankly, the most significant journey in my life,” Simpson said.

The relationships Simpson has made on the Pine Ridge Indian Reservation are what allowed him to really understand the details of the characters and narratives in Neither Wolf Nor Dog.