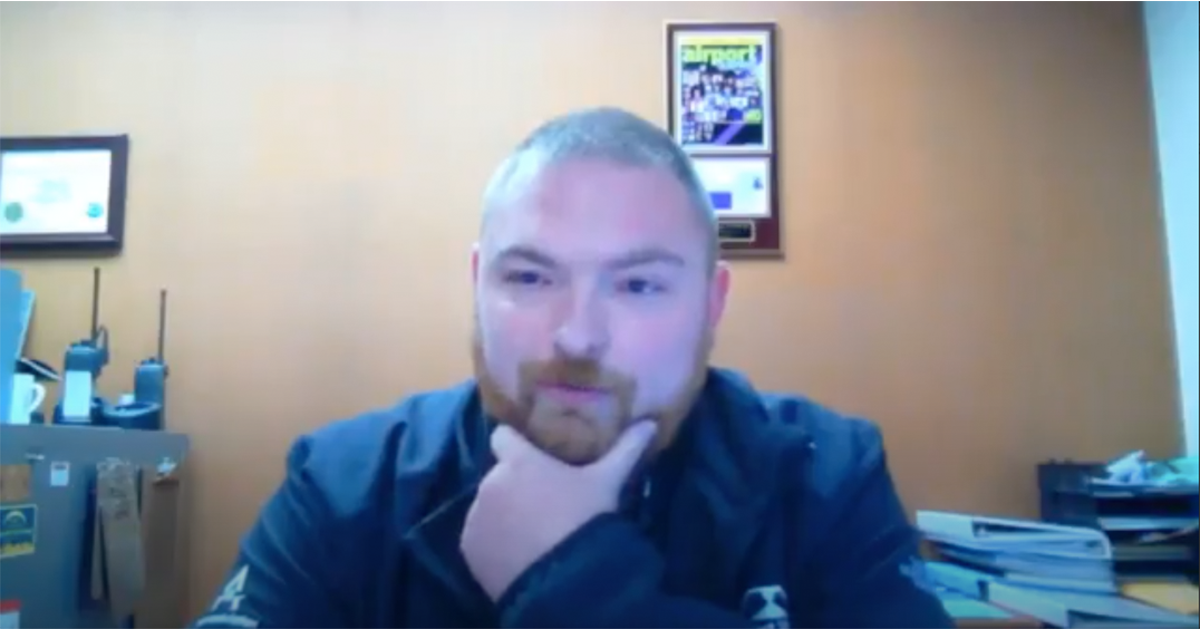 Ray Lovato Recycling Center Board President Devon Brubaker shares his thoughts during the Solid Waste District No. 1 board meeting on Monday.

The recycling center’s funding request to Solid Waste District No. 1 for $218,000 would fund operational costs over the next year to keep recycling services available for the community.

Several board members suggested providing funds based on tonnage, however, the recycling center would not be able to produce enough tonnage for funds to cover the next fiscal year.

According to Devon Brubaker, the recycling center has processed 689,233 pounds of recycling through the first quarter of the year. Current projections based on tonnage funding indicate that it would cost the District around $350 for every ton recycled — a number many board members find to be very high.

Board member Chris Meats said that the board may have to fund the recycling center right now more than they want to. Instead of implementing tonnage funding this year, Meats recommended that an MOU should be drawn up to include a requirement for the recycling center finding a way to lower the cost per ton.

Mayor Tim Kaumo agreed with Meats and said that the Rock Springs City Council is looking to create an ordinance for recycling that would help generate funds.

“We’re all in this together,” Kaumo said. “… It’s like recreation. We never make money on recreation, but we provide a service to the community which is important.”

“This is a service that helps keep that tonnage out of the landfill and allows us to recycle those necessary items that we should be,” Kaumo said.

Solid Waste District No. 1 Board Chairman Randy Foster expressed his concern that the District is a small portion of Sweetwater County that funds a county-wide recycling center.

“Don’t get me wrong, recycling is the right thing to do,” Foster said. “But so is being prudent with taxpayers money, and that’s where I struggle with this.”

Foster said that he has personally had three people provide negative feedback about the recycling center. Two people complained that they did not receive money for taking their recycling in and one person shared their concern over the use of taxpayer money.

Foster asked Ray Lovato Recycling Center Board President Devon Brubaker if he had approached the Sweetwater County Commissioners for funding.

“I have not approached the County Commission for funding,” Burbaker said. “That has not happened at all.”

Brubaker said that he has had personal conversations with the County Commissioners about opportunities for recycling to be regionalized and expanding resources through partnerships.

“We’re looking for a real partner to find solutions for our community,” Brubaker said. “We just want to work together. We can’t do it without the Solid Waste District.”

Foster asked Mayor Kaumo if the city would be funding the recycling center this year.

Mayor Kaumo said that funding for the center was “completely” out of this year’s budget.

“We want to do everything we possibly can to help the recycling center continue with their services for the communities, yet our budget cannot withstand the continuation of the funding. We just can’t,” Kaumo said.

The City of Rock Springs approved a preliminary budget last week that did not include any funding set aside for the recycling center. Board member RJ Pieper asked Kaumo if the funding cut this year was temporary, due to the economic challenges, or “fairly permanent.”

“Based on the discussion, we didn’t want to bring the funding into recycling,” Kaumo said. “We felt that the District had it within their budget to fund recycling and it was definitely a service that made more sense and should be encompassed into the Solid Waste District.”

According to Mayor Kaumo, the City has cut $6.2 million from the budget already and has another $1.2 million to cut by July 1.

“In the future, if times look better and we need to step up and help, I’m sure that discussion will take place,” Kaumo said. “But I can tell you that going into this budget year and most likely the next budget year, unless something miraculously happens here, it won’t be in our budget.”

“We do realize that we all have a dog in this fight,” Kaumo said. “We want to do everything to make this a viable option for the community and assist the Solid Waste District in keeping those items out of the landfill.”

The Solid Waste board will meet again on Monday at 6 pm in the Rock Springs City Council Chambers for a budget workshop. No final decision will be made by the board on Monday.