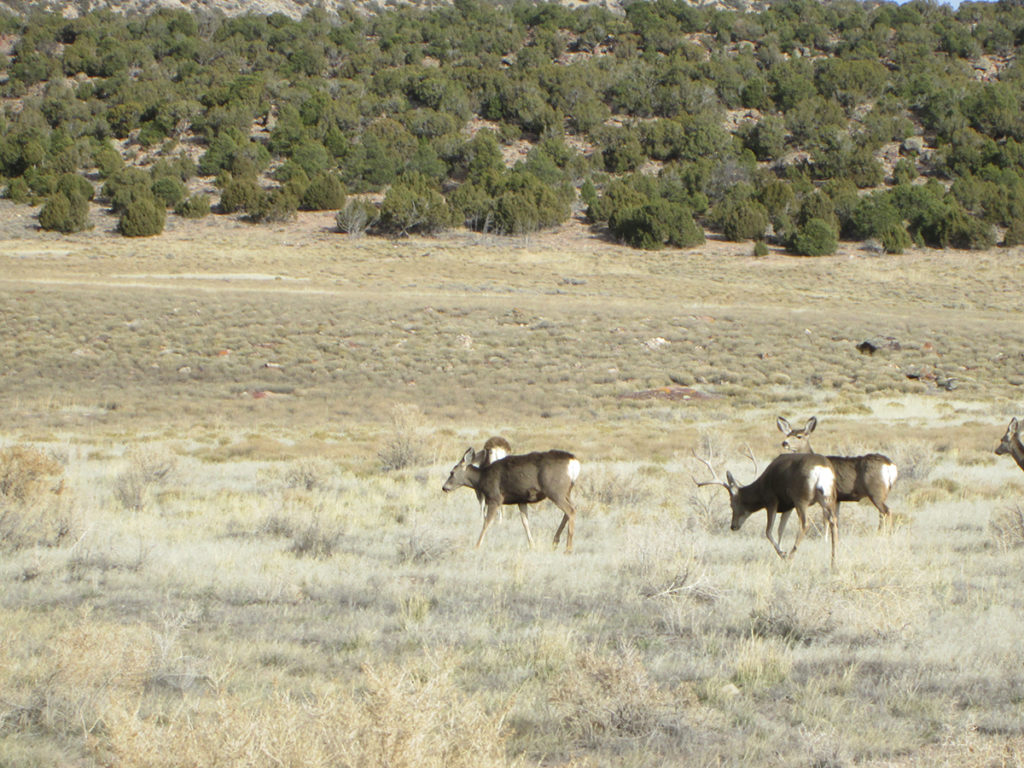 Browsing in the lush green and broad wedge of undulating swales, among willow thickets and innumerable beaver ponds, encompassed by the three ranges of mountains, thousands of mule deer, bucks and does and fawns, moved together like the flow of clouds over and around obstructions as their whims and instincts, honed to a sharp edge for survival and convenience from thousands of years of generational learning, they caught the hint of a cold breeze in early fall, and some looked southeastward, chins twitching subtlety upwards as if to say, “That way.”

They take a few steps, a few more bites of flowers and seeds and berries, grabbing more on the way.

The earth vibrates as they move. Some stop for a moment to look over their shoulders to wispy clouds on cold winds sweeping over the jagged mountains.

The severe season of cold and snow is coming. It’s time to travel to where the elevation is lower, the winter milder.

Keeping the foothills of a mountain range to their left, they make their way southeastwards, wading autumnally lowered rivers, the vegetation changes to drier grass and brittle brush.  Twenty miles to the right of the end of the mountains are flat-topped mesas, some eighty miles from where they started.

Once there the herd turns right and goes straight south. They come to sweeping sand dunes and struggle over them, to streams of bitter water not good to drink.  Some of the weaker deer lay down to rest, and sometimes go no further.

Onwards to higher ground with better water and countless beaver ponds, where from on high they can see the lush riparian wintering grounds.  Before getting there, though, they must pass the most dangerous place of all, a twenty-foot wide notch through a knife ridge, and the deer are now too weak to find another route.

Thousands of deer congregate before the notch. They are afraid to proceed. A few young bucks raise their heads and puff out their chests.

They advance towards the notch. The others follow. Inside the notch there are inscrutable pictographs painted along the bases of the cliffs, towering hundreds of feet. The walk becomes a trot, a run, then rocks and spears hurtle down from above. The deer panic and stampede.

Some are hit and injured, others are killed. Most make it through. They fan out over broad river valleys, where grows vegetation of great nutrition.

They spend a fairly warm winter and fatten and strengthen.  The does are pregnant. They proceed back north again, to their beloved valley of delicious water, flowers, seeds, and berries.

A New Kind of Danger

Referred to here is the now well-known mule deer migration corridor of southwestern Wyoming.  What I believe are the southern reaches of it are now severed by Interstate 80. The three ranges of mountains are the Wyoming, Gros Ventre, and Wind River.

The flat-topped mesas are the Oregon Buttes, followed by the Killpecker Sand Dunes, the high area of beaver ponds, now dry, is the southern part of Sweetwater County near Highway 430, the notch is fictive, the wintering grounds are Browns Park through Sunbeam, and the country between the Yampa and White rivers, in Colorado.

We no longer kill deer with rocks and spears.  Now we could easily kill all of them. Harder, but preferable, is keeping them alive. The deer never asked us to build I-80, and other roads. For them it was not something to debate and vote on.

They try to adapt, spending winters on the rocky south-facing slopes, and sandy flats east of Rock Springs to Point of Rocks.  The ground is often snow free, thanks to unceasing wind, but it’s a hungry place, and there’s not much nutrition for reproduction.

The mule deer population is steadily declining.  Try camping during the winter on the slopes above the Superior exit. The deer there look depressed, dejected, and hungry.

The interstate below is like a Berlin Wall: a fence, traffic increasing yearly, another fence, frontage road and railroad tracks.  It’s much worse than hunters with rocks and spears. Some try to cross, but only a few survive. We call the others roadkill. We blame them for ruining our cars, and sometimes injuring or killing us.

There is, however, a solution.

Near Kemmerer and Cora there are entire infrastructures of game over and under passes, and fencing designed to direct wildlife to these safe crossings.  Studies show that whereas they cost a lot of money, in time they save even more, and perhaps the deer herds will rebound. 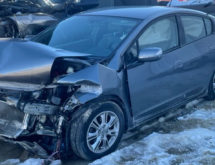 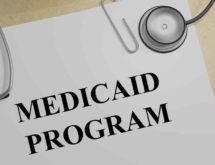