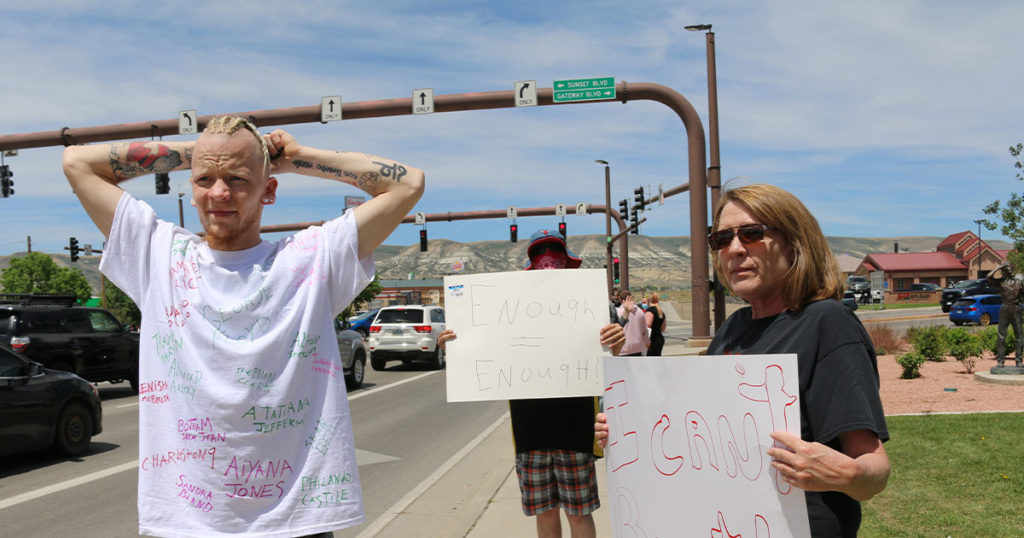 ROCK SPRINGS — What started out as a couple of guys with signs, has slowly grown into about 10 people holding their hands in the air or signs saying “Black Lives Matter,” Stop the Violence,” or “I Can’t Breathe.”

On Tuesday, those who were driving down Dewar Drive may have noticed a small group of protestors holding signs to raise awareness against the police brutality.

The protests come after a man, identified as George Floyd, died when an officer in Minneapolis, Minnesota, held his knee on the back of the man’s neck for several minutes. It was recorded by bystanders and has garnered national attention.

After Floyd’s death, protests have occurred across the United States and many have turned violent, with rioting and looting overshadowing the peaceful protest.

This type of behavior is something the Rock Springs protestors say they want to avoid. Those who were in attendance said they wanted to keep the protest peaceful.

Even though Roark wants to bring attention to police brutality, he said he still supports police.

According to Roark, the protest actually started Monday night with himself and Navarre Mudd, who was the one who had the idea to start a protest.

“Violence is no solution at all,” Partington said.

Roark said until he sees a change he is going to continue peacefully protesting.

During the continued protest in temperatures around 80 degrees, several community members stopped by to drop off water and food for the protestors.

Partington said they have been getting a lot of people honking their car horns or waving at them to show support.

So far, that hasn’t happened.

Rock Springs resident Alice Halstead just happened to be driving by when she saw the protest and decided to join because it was a cause she believes in. She just went to the store, bought some poster boards and markers and joined the group.

“I’m done with the cops killing people,” Halstead said. “That is not their function.”

While Halstead has seen protestors on TV, she never thought she’d become one.

“I did not know I was going to do this until today,” she said.

Roark said he’d like more people to join the group to raise awareness.

Protestors Across The Street

While one protest was going on by the large american flag on Dewar Dr., another directly across the street was just getting started near the Rock Springs Chamber of Commerce building.

“We just want to show support for the police,” Jerry said.

“Some people seem to think all police officers are bad and that’s just not the case. The cops are getting a bad wrap now,” he said.

With the COVID-19 Coronavirus pandemic still occurring, Jerry said it’s even more important to let officers know how much they are appreciated.

He said the officers involved in Floyd’s death will go through the criminal justice system just like everyone else and it should be dealt with by a court of law, not rioting or looting.

“Everyone has lost faith in the cops,” Kim said. “Ours do a wonderful job. I just couldn’t sit at home and watch them on the TV anymore.”

Despite what others might think, Kim said they are not protesting the protestors. She said they just wanted to show support for the local police officers. She said the country needs to stop this color divide and know all lives, regardless of color, matter.

That’s something all the protestors could agree on – the need for change.