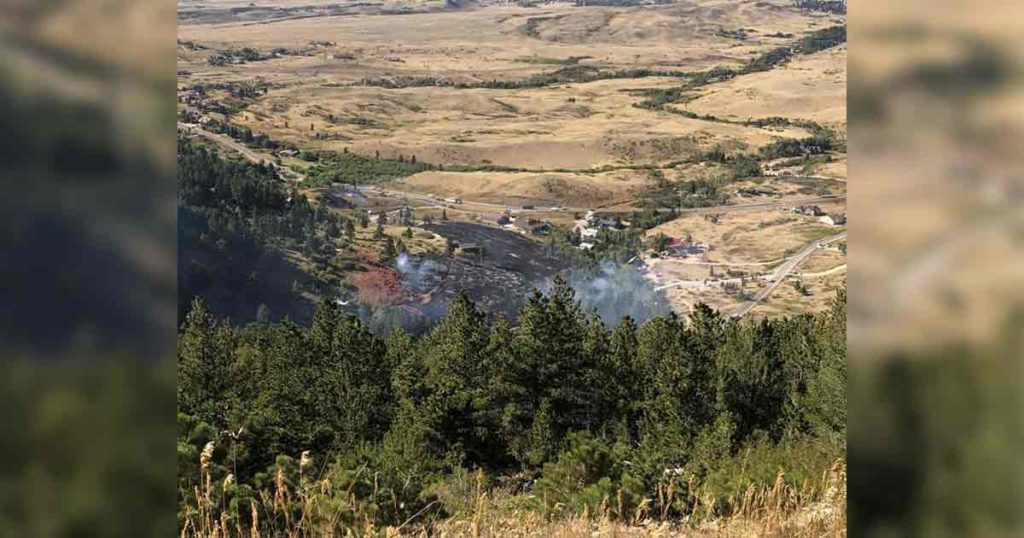 CASPER — Natrona County Fire Warden Mike Haigler told Oil City News at 5:23 p.m. Saturday, September 5, that the fire that burned off the south side of Garden Creek Road near Rotary Park had been contained.

Crews from Casper Fire-EMS and the Natrona County Fire District; Bar Nunn, Mills, Evansville and Midwest fire departments as well as the Casper Mountain Fire District all responded to the fire.

“We had every one of ’em,” Haigler said.

Fire engines and brush trucks were used in addition to water drops by helicopters and fire-retardant slurry drops by single-engine fixed-wing aircraft were deployed to suppress the fire.

All lanes are closed on Garden Creek Road (US Highway 252) from milepost 0 to 4.37, (Wyoming Blvd near Sunrise Shopping Center to where Garden Creek Road meets Casper Mountain Road) according to the Wyoming Department of Transportation at 5:05 p.m.

An Oil City News reporter confirmed about 2:00 p.m. Saturday that a structure was burning off Garden Creek Road. Mills Fire Chief Dave North confirmed from his vantage at Lookout Point that one structure had been completely lost in the fire.

NCFD officials said evacuation orders had been given for residents around Rotary Park, Garden Creek Falls and the surrounding areas. Oil City cannot confirm the lifting of those orders as of 5:34 pm Saturday.