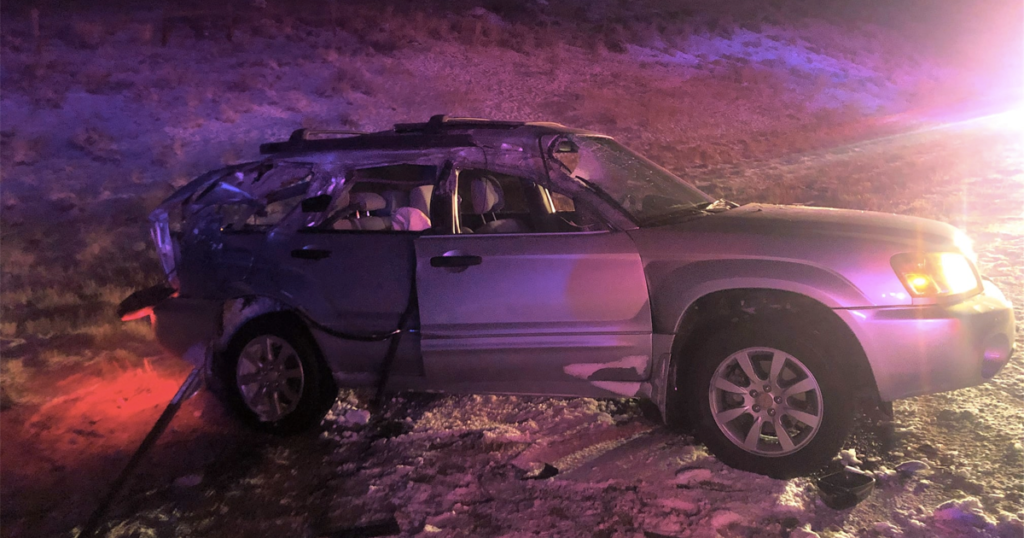 RIVERTON — A Wyoming Department of Transportation plow truck was hit by a passenger vehicle early Wednesday morning on slick US26 roads west of Riverton.

The near head-on crash caused minimal damages to the truck’s plow, but heavy damages to the passenger vehicle. No serious injuries were reported. The plow truck was moving slowly at the time of the crash.

The Wyoming Highway Patrol is investigating the crash.

WYDOT Riverton heavy equipment operator Mike Crawford said it’s important for citizens to realize that WYDOT plow trucks are out on the highways during and after snow storms.

WYDOT has numerous bright yellow plow trucks, and when working the roads, these plow trucks have amber, red and blue flashing lights mounted on top of the cab and on the back of the sanders. Snow plow trucks and the plows are huge machines and equipment, capable of moving tons of snow every minute. Operators of these snow plows are highly trained professionals.

These snow plow professionals need cooperation from drivers so they can do their jobs and keep the road safe for drivers. Give them room to operate.

“Stay well back from operating snow plows, and be aware of oncoming plow trucks,” Crawford said. “These trucks are spreading sand, anti-icing and de-icing chemicals on the roadway.”

WYDOT employees are out on the highways every day and many nights, including holidays, attempting to provide a safe, high quality and efficient transportation system for the citizens of Wyoming.

WYDOT employees are on the roads when the conditions are the worst, and they’re out there between storms, too. With limited visibility, snow plow drivers can’t see vehicles behind them if the vehicles are too close to the plows.

“Remember, the safest driving surface is behind the plow. If you must pass, don’t pass on the right into the plume of snow being moved,” Crawford said. “Be sure on two-lane highways that you have plenty of time to pass. Keep a close watch. These huge plow trucks often stir up their own snow cloud while doing their work. It’s sometimes impossible to see what’s coming at you when passing a plow truck due to the ever-present snow cloud created by the plow truck.”

WYDOT snow plows usually operate at slower speeds than other traffic. “Always remember our plows are helping to keep you safe,” Crawford said.