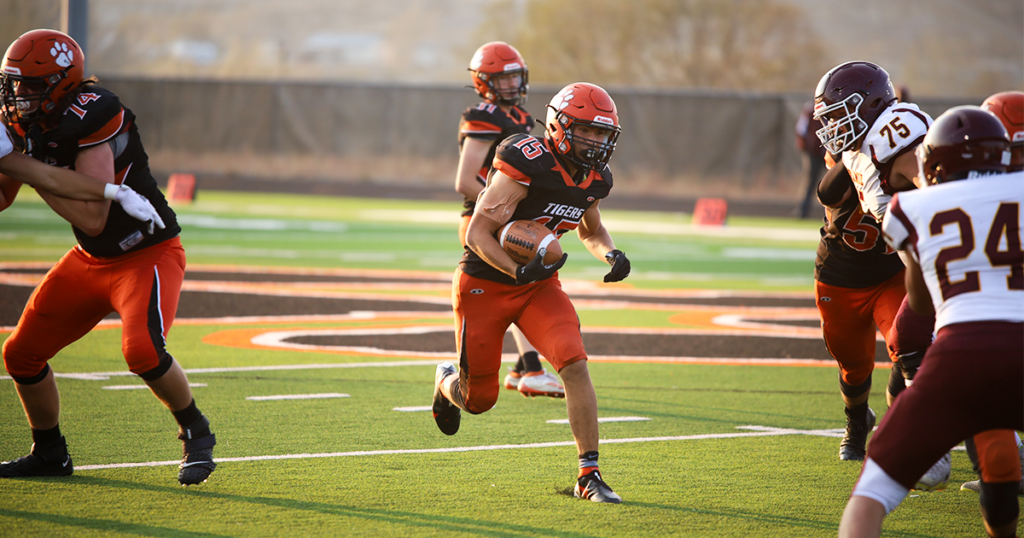 CHEYENNE —  Make no mistake, the Rock Springs Tigers have arrived.

Whether you’ve been on the side supporting this coaching staff or not, tonight’s game is evidence of a team headed in the right direction. There’s no doubt about that.

Although the 21-14 victory over #3 Cheyenne Central on wasn’t perfect, it was enough. Friday night’s game was the type of game that head coach Mark Lenhardt and his team have wanted to win, and they did.

For weeks Central was the #1 team in 4A, until losing last week against Cheyenne East. A good team like Central doesn’t lose two games all of the sudden, rather, the Indians got beat by teams equally as good, if not better than them. One of those teams is the Rock Springs Tigers.

Rock Springs improves to 5-3 on the season, and is a few plays away from being 6-2. The Kelly Walsh loss really sticks out now.

And that will be a game worth tuning into.

Giving Credit Where It’s Due

Rock Springs has one of the top-ranked defenses in 4A and it once again proved to be the difference in the ball game against the Indians.

A total four sacks, including the final sack to seal the victory, was huge against a team that likes to air the ball out. The Tigers had great pressure up front which was a problem for the Indians, and allowed the Tigers to maintain control of the game.

Another key takeaway from the defensive side of the ball was the team’s ability to play with a bend, but not break mentality. Throughout the night, Central had many big chunk plays. It was impressive to watch this defense keep the ball in front of them and fight.

As a unit, Rock Springs had multiple defensive stands, including a fourth down stop on their own eight-yard line. The defense played their best football of the year, which is essential with the Thunderbirds coming into town next Friday.

All credit is due to the defense for tonight’s big victory.

Again I’m forced to give out two game balls. This week we’re tossing out two of these gridiron awards to head coach and offensive guru Mark Lenhardt and defensive coordinator Casey Walker.

Players make plays and coaches put players in position to make those plays. Both Lenhardt and Walker achieved that alongside their players in Cheyenne tonight.

Offensively, Rock Springs had its way running the ball. Collin Madsen could not be stopped, and he found two touchdowns as a result. However, the play of the game had to have been a brilliant decision by Lenhardt to go for the home-run play after a huge fourth down stop with seven minutes left in the game. The play resulted in a 88-yard touchdown connection from Brock Bider to Isaac Schoenfeld, which ended up being the scoring difference in the game.

We’ve highlighted the defense already tonight, but the brains behind that defense should be recognized as well. Walker and his players did an impeccable job and made plays when they needed to the most. On the final drive of the game, Walker bravely sent multiple blitzes in an attempt to stop an Indians game-tying score. And it worked with a sack on the final play of the game.