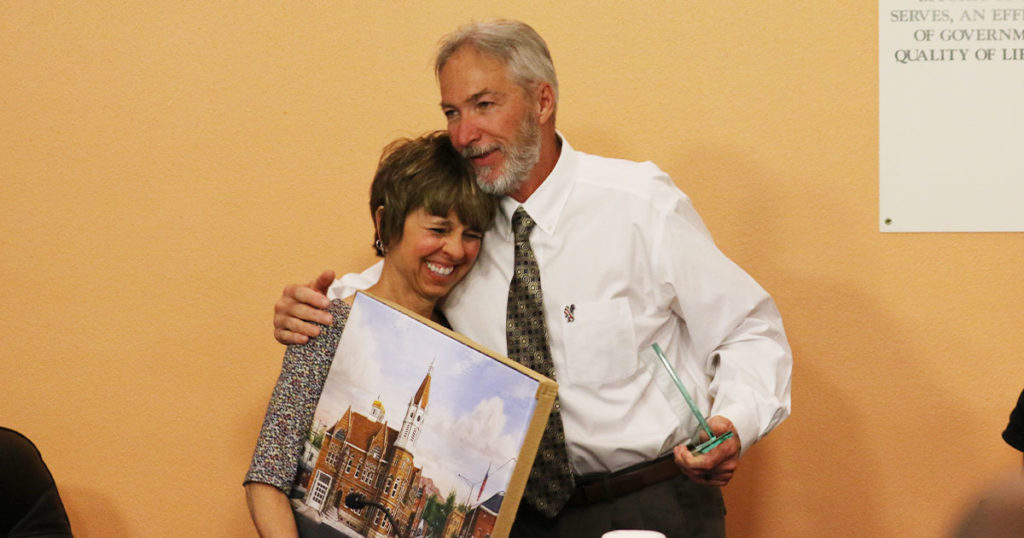 During the Rock Springs City Council meeting, Rock Springs Mayor Timothy Kaumo presents Councilor Glennise Wendorf with a photo of the old city hall and a plaque. This was Wendorf's last meeting. Photo by Stephanie Thompson

ROCK SPRINGS — For the past 12 years, Glennise Wendorf has shown residents what it truly means to be a public servant, as she served Ward III on the Rock Springs City Council.

Wendorf has served Ward III residents on the Council from 2008-2020. Wendorf said her term will be up this year, but she and her husband, Mike, have decided to retire and move to Arizona. According to Wendorf, they have been looking for a place to retire for the last couple of years.

Wendorf said prior to getting on the Council, she served on the Rock Springs Planning and Zoning Commission, but decided she wanted to try something else.

“I was ready to take on something bigger,” said Wendorf.

Even though Wendorf has served on numerous committees and boards over her years of service, including the water and sewer board, Southwest Wyoming Regional Airport Board liaison and the Rock Springs Urban Renewal Agency/Main Street liaison, what she’s known for is her work on the city’s annual City-Wide Cleanup.

“Glennise has always demonstrated priority concern for this community; before personal agenda, before self-interest, before recognition,” Rock Springs Chamber of Commerce CEO Rick Lee said. “She genuinely is a ‘public servant’ not a ‘career politician.’ She has always been an advocate for the Chamber and for the success of businesses in Rock Springs.”

“She is affectionately referred to as the ‘Trash Queen’ because of her involvement and years of hard work at the City-Wide Cleanup,” Lee said. “She started on that project before she was even on the Council, during Mayor (Tim) Kaumo’s first term.”

Wendorf laughed and said even though she has done a lot of other things for the city, she’ll always be known as the “Trash Lady.” Wendorf said she just hates litter and that’s how she got the program started.

“She is known for so much more than that though,” Lee said. “Many people have told me that they have called Glennise over the years for assistance and she has always tried to help.”

“The residents of Ward III were well-represented. Glennise is a class act and could always be counted on to be there in support of our businesses and our residents,” Rock Springs Mayor Tim Kaumo said during the meeting.

When Wendorf wasn’t busy helping with the City-Wide Cleanup project, she’d attend as many Rock Springs events as she could, including RS Chamber of Commerce ribbon cuttings.

“She always tried to attend and be supportive. I have seen her at ribbon cuttings in snow, and cold, and wind; always smiling, always interested. Not always at her convenience, but she was there,” Lee said.

“She took her job as a councilor very seriously and she is a great example for anyone who may decide to seek her seat on the city council,” Mayor Kaumo said. “She will be missed.”

“It’s truly been an honor to serve the citizens of Rock Springs.”