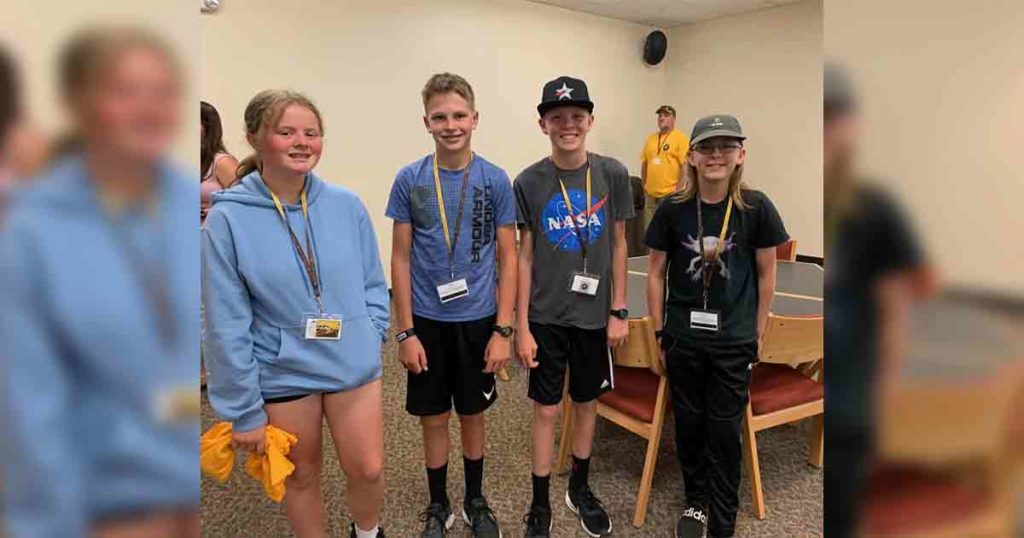 ROCK SPRINGS — Astro Camp was everything four Rock Springs Junior High School students thought it was going to be and then some.

The week-long camp gave these students the opportunity to increase their mathematics, science, engineering, technology and communication skills. A total of 20 students from Wyoming and two from Colorado participated in the camp, which focused on exoplanets.

Exoplanets are described as planets outside our solar system, meaning they orbit a star other than our sun. Astronomers have confirmed more than 4,000 exoplanets orbiting distant stars, with many more exoplanets waiting confirmation, Danny Dale, a professor in the UW Department of Physics and Astronomy, and an associate dean in the College of Arts and Sciences, said in a press release.

Those who attended the camp were chosen based on demonstrated interest and academic potential in math, science, astronomy and space, according to a UW press release.

After returning from the camp, the Rock Springs students had time to reflect on their experience.

It was fun being around people who actually like science.

Croft not only enjoyed the experience, but enjoyed learning new things.

With so many different activities to participate in throughout the week, it was hard to for them to decide what their favorite was.

For Wall, speaking with astronaut Steven Smith was the highlight of his experience, however he also enjoyed the egg drop activity. During this challenge, students were asked to construct a structure that would keep an egg, which represented an astronaut, safe after dropping it from a three-story building. To add to the challenge, students were only given certain materials and one hour to create their structure.

Smith said he determined the egg drop challenge had about a 50 percent success rate. For Smith, his favorite part was when they had some spare time and were allowed to have foam sword fights with each other.

“My favorite part is learning the different colors of lights that we can’t see with our naked eye,” Croft said.

For example, Croft said the sun is actually more of a light green color.

Bryant’s favorite activity was when the group had the opportunity to enjoy the “Maker’s Space” area. This allowed participants to grow plants or make themselves buttons. One mention of “Maker’s Space” and all four started talking at once about how much fun they had.

All four students described in-depth what process they used to create an irrigation system for their seeds, which were planted in a medium-sized box. Smith said even though he thought he created a good irrigation system, the water never made it to his seeds. It just soaked into the cardboard box.

Croft said the irrigation system created didn’t work as intended. The water seemed to pour out of the first few water holes and the others did not make it further. Croft was the only one of the group who got a seed to sprout.

Bryant was excited to share her watermelon drop experience with the group. She was allowed to go on top of a roof and drop the watermelon. Of course, the amount of splatter the watermelon made when it hit was ground was well received.

Croft said the experience was just “a bunch a nerds hanging out learning about nerd stuff.”

“It’s just enjoyable for some people and those people just happen to be us,” Croft said.

Croft strongly recommended the program to anyone who is interested in interacting with people who truly enjoy science, math, and biology.

Smith said he would also recommend the camp not only because of what he learned, but because of the friendships he made.

“I made good friends with a few people,” Smith said.

All four attendees came back from the weeklong camp excited about what the future of science holds for them. Not only did they learn a lot, but enjoyed the experience.