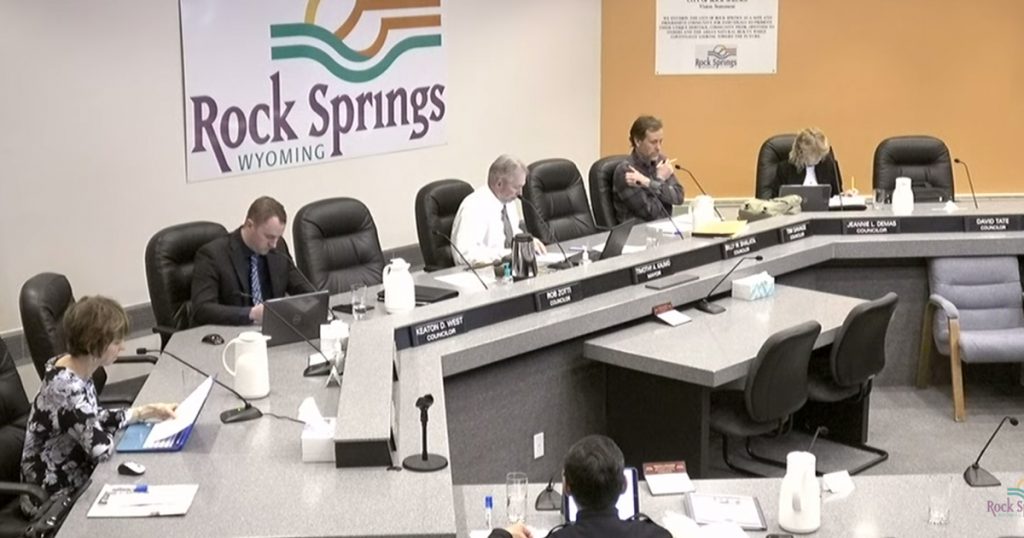 The Rock Springs City Council was practicing social distancing during its regular meeting April 7. Photo courtesy of the city of Rock Springs via YouTube.

During the April 7 Council meeting, the Council discussed why it wrote the letter to the Sweetwater County Commission informing the Commission it was suspending its sixth-penny requests and their reasoning behind it.

Councilor Keaton West said representatives from all the municipalities discussed what to do in regards to the sixth-penny tax. While all of the other municipalities agreed to wait one month to see how the COVID-19 Coronavirus pandemic was still impacting the communities, Rock Springs decided to pull out.

West said this decision has left the other municipalities wondering if the tax will pass without Rock Springs if they decide to move forward with the tax.

“It’s taken a lot of time and effort to put these projects together. It started a few months shy of a year ago…,” West said. “It’s a difficult decision to put them on hold, but I think as a group we all felt that was the most responsible thing to do and let people get back on their feet and hopes that this does blow over.”

West said even though the city will not move forward with its special-tax requests it can always do so in a special election. He said if the special-purpose tax initiate does move forward without them and it fails, they would have to wait at least a year to place it on a special ballot anyway.

He said they would have liked to see those projects move forward, but not at this time.

“I think we have to do what’s best for the community,” West said.

According to West, Sweetwater County Treasurer Robb Slaughter said the amount sales tax revenue being generated in the county has dropped and he believes it will continue to drop. At these numbers, it will take around 6 1/2 years to pay the tax off instead of around 4 1/2 years.

“This wasn’t a move to totally forget about these projects and all the work all of us, especially you, have put forth in trying to move this forward. It was just bad timing,” Mayor Timothy Kaumo said to

Due to COVID-19, some local businesses have closed and others are struggling, he said.

“I think common sense alone would prove that voters would definitely not appreciate having to consider a sixth-penny tax at this time in their lives,” Kaumo said. “I think it makes sense to hold off, revisit this in a bit and take a look at where the economy and how our voters are doing at that point.”

He’s hopeful they can bring this back in the future.

To read the letter to the commissioners click here.