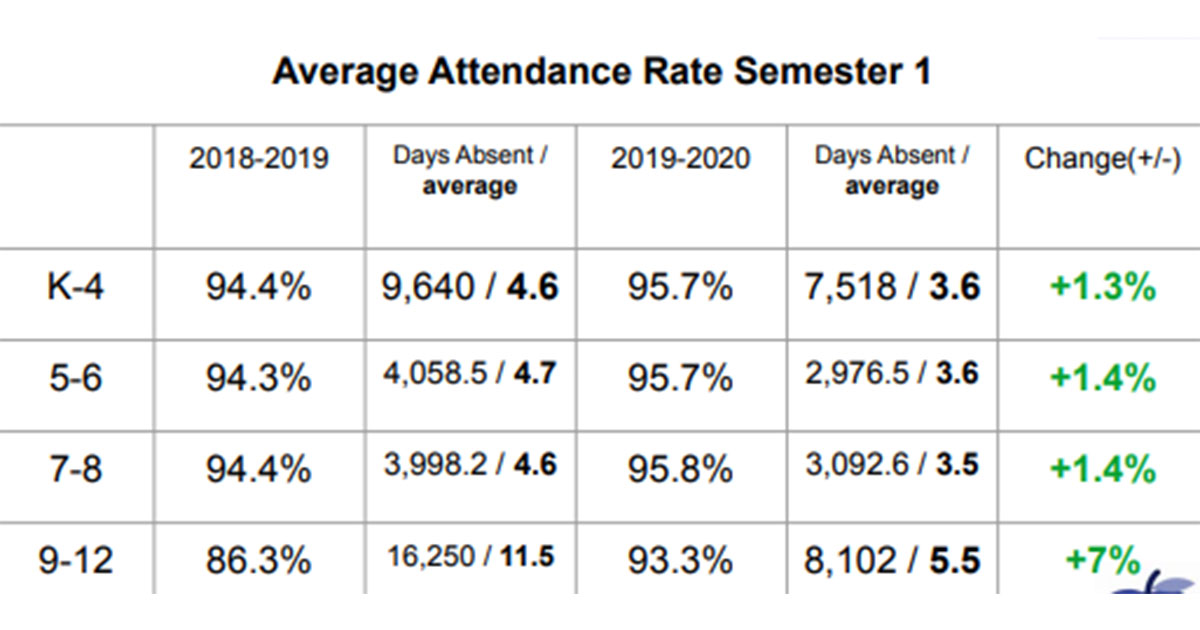 ROCK SPRINGS — The Sweewater County School District #1 Board of Trustees heard from school administrators during their January 13 meeting to get an update on new attendance policies the district implemented at the start of the school year.

Previous to this school year students had been allowed 10 excused absences from school, where parents can excuse their child without explanation, a semester. The new policy cut that number in half, allowing for five excused absences a semester. The board heard what procedures schools are implementing to deal with situations where students are frequently absent and risk violating the new policy.

“When we think about an attendance procedure, we automatically think punitive…that’s not the approach that K-6 takes in our district. We’re very much a positive, proactive approach,” Eastside Elementary Principal Tina Searle said.

Searle said that preventative approach includes four procedures that have been implemented throughout her school. The programs include: enrichment activities that encourage attendance, counselor and social work support, finding creative ways to thank parents for helping, providing parent information on factors impacting attendance.

Searle said that successful intervention for students who are struggling with attendance requires asking what is triggering the issue. “A lot of times you find, unfortunately, that kids are up on technology late at night and they can’t get up in the morning.” Searle said that once factors impacting attendance are identified, school staff works to come up with tangible solutions.

Searle concluded her remarks to the board by saying, “It has gotten better. I will tell you that. And parents are responding.”

Rock Springs Junior High Principal Kristeen Cundall outlined what happens once a student accumulates excessive absences and intervention is required. School procedure is to mail a letter home once students use all five of their excused absences. Another letter gets mailed if a student has one unexcused absence. Once a student reaches two unexcused absences, the county attorney is notified.

Cundall also outlined intervention actions that occur once students have five unexcused absences. Below is the procedure that Cundell presented to the board.

Searle also provided the board with an explanation of what attendance intervention looks like at the elementary level.

Cundall said that looking back over the previous school year she saw that absences were significantly higher during the second semester than the first. “So that really was kind of another warning to me to get on attendance early and stay on it,” Cundall said.

Once a student has five unexcused absences, the school will file a Child In Need of Supervision petition with the Department of Family Services and the County Attorney. “Unfortunately, we have had to do this,” Cundall said. “But that’s the outcome that I don’t want to get to, we want to try and remediate this long before we get to that,” Cundall said.

Cundall also noted that if students have documented medical excuses from school, days missed for that reason do not count into their attendance days.

Rock Springs High School Principal Annie Fletcher said the high school also holds meetings once a student reaches five unexcused absences, the same way the junior high does. Fletcher said that during the first semester of this school year the high school held 232 attendance meetings. That number does not include instances where students have had multiple attendance meetings, but reflects the number of students impacted. “For us, one of our challenges are the 47 unreachable families,” Fletcher said. “They don’t have contact information, their phones are blocked from the school, other things are going on there. That’s our challenge moving forward.”

Both Fletcher and Black Butte High School Principal Bryant Blake said the new policy has brought about a noticeable boost in their attendance numbers. That change is shown in the chart below.

Board Chairwoman Carol Jelaco said her concern when the attendance policy passed was whether schools would have the resources to be able to have the required attendance meetings for intervention procedures. “Do you feel like you have what you need, or what do you need to help you meet this?” Jelaco asked. “Because we talked about the implementation of the policy had to be from day one or it was primed to fail unless those meetings were held starting immediately.”

Fletcher said there are some programs and data collection tools that could be useful in the future. “We’re learning and we’re getting more efficient,” she said.

“You can see that it’s working and we’re getting those kiddos to school. And it’s not about money. I mean, of course, always right? We like money, but that’s not why we changed the attendance policy,” Human Resources Director Nicole Bolton said. “The complaints that have come in have been far and few between.”

“So what I’m hearing is that of all the concerns we talked about at the time of the adoption of this policy, very few have come to fruition,” Jelaco said.