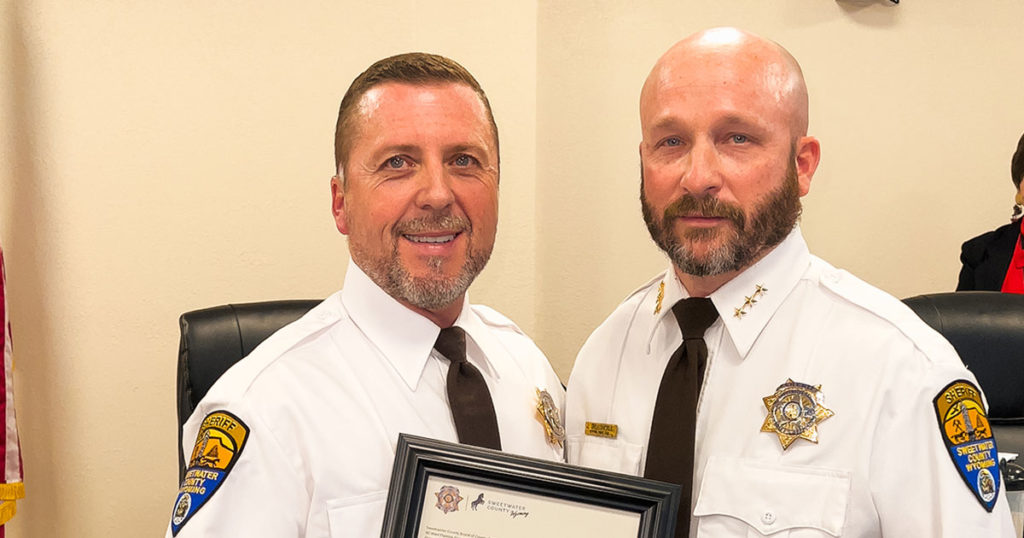 Sheriff John Grossnickle presented Deputy Sutton with the award during the Sweetwater County Commission meeting. Grossnickle said on October 7, 2021, at around 10 pm, Sutton saved an infant’s life on I-80. He responded to the area of mile marker 95 on I-80 between Green River and Rock Springs for the report of a baby choking on food in the car.

“On arrival, Deputy Sutton quickly assessed the seven-month-old infant, recognizing that it was conscious but not breathing and that the baby’s face was starting to turn red. Deputy Sutton proceeded to remove the infant from the vehicle and immediately began administering life saving measures. Moments later, Deputy Sutton successfully dislodged a blockage from the infant’s airway and the baby started to breathe normally again and began to cry,” Sheriff Grossnickle said.

To support the family and to ensure the infant received proper medical care following the incident, Deputy Sutton then escorted the infant and its family to the hospital. The infant was later released from the hospital without injury.

“Deputy Sutton’s proactive response to the scene, his astute recognition of the severe medical emergency, and his immediate actions and his effective use of the infant Heimlich maneuver directly resulted in saving the small child’s life,” Grossnickle said. “Moreover, a failure to act or any delay in action in this situation may have very well led to an unnecessary and tragic outcome. I believe Deputy Sutton’s actions during this incident merits special recognition.”

The County Commission offered their gratitude and recognition of Sutton, as well as the Sheriff’s Office as a whole.