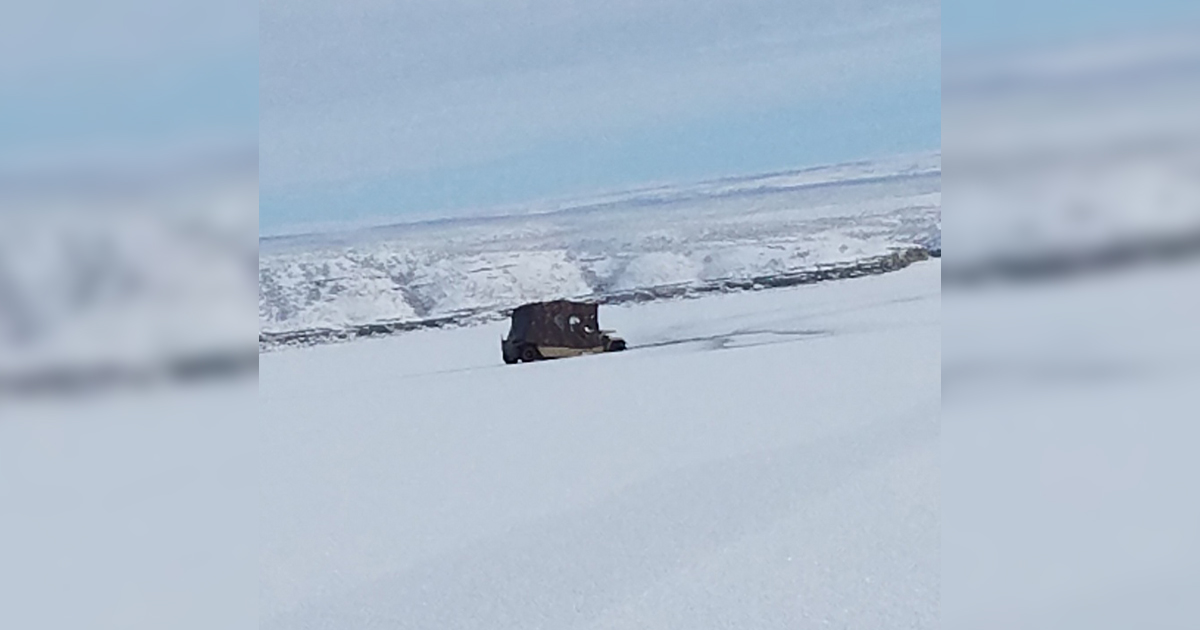 Rock Springs resident Dave Freeman couldn't believe he saw a side by side go through the ice at Flaming Gorge Reservoir December 31. Photo courtesy of David Freeman

For Rock Springs resident David Freeman, the whole incident is still fresh in his mind days after witnessing a side by side 4-wheeler almost go through the ice on Flaming Gorge Reservoir.

On December 31, Freeman and one of his friends were fishing near South Buckboard on the reservoir. Even though the fishing was good, they noticed a side by side driving around on the ice.

Freeman said the ice they were fishing on was about 4 inches deep and was good ice, but he and his friend were concerned about the side by side driving on the ice. Freeman, who is an avid fisherman, knew the ice wasn’t 4 inches everywhere.

“It was 4 inches of good ice, but you don’t drive a heavy machine like that on 4 inches of ice,” Freeman said.

At around 2 pm, after about a half an hour of driving on the lake, the side by side made its way away from the shore out into the lake. When it was about 400 yards from the shore, it sank into the ice.

Freeman and his friend watched in terror, not knowing how they could help.

“I can’t believe I saw what I saw,” Freeman said. “We had somebody’s life in our hands.”

Freeman and his friend talked about what they could do to help, but they didn’t have a long enough rope to safely reach those in the side by side. Freeman said as the few minutes went by quickly, they noticed the side by side didn’t sink all the way through the ice. It floated.

“I can’t believe it didn’t go all the way through the water,” Freeman said.

He watched as the driver of the side by side continued to maneuver the machine until it got out of the ice. They could see water and snow being kicked up as the side by side spun its tires trying to gain traction.

“I couldn’t believe what I was seeing,” Freeman said. “I’ve ice fished since I was five years old, and I’ve never seen anybody go through the ice before, so it was kind of traumatic.”

Freeman was glad whoever was in the side by side made it out OK, but he felt the whole situation could have been avoided.

Freeman said even with ice thickness reports, it’s always important to inspect the ice before going on it.

“Use your head. Don’t believe what anybody tells you about ice thickness,” Freeman said.

To see a video of the side by side trying to get out click here.