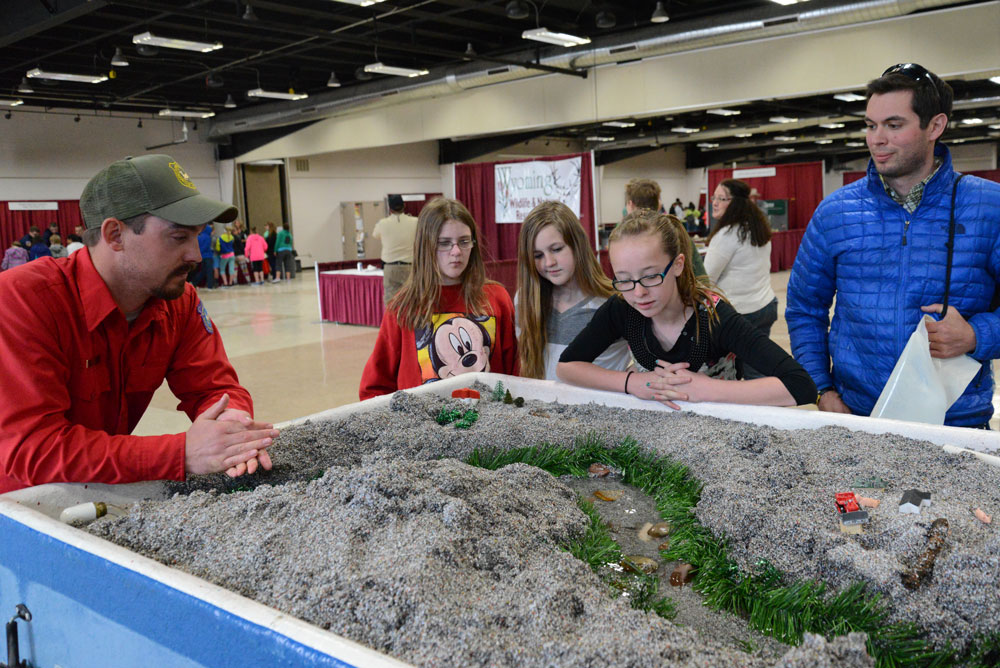 ROCK SPRINGS – For several years, fifth and sixth graders from Sweetwater School District No. 1, as well as other schools from around the region, have had an inside look at alternative land uses in the county. The exciting and educational demonstration was once again given at the Resource Rendezvous.

The business industry, governmental agencies and others gathered at the Sweetwater Events Complex, not only to show students positive ways to use the land, but also give students a look inside their operations. This was the 22nd year of the rendezvous.

The concept of the rendezvous, according to SWCSD No. 1 Coordinator Jana Erickson, is to show the multiple uses of the land. She explained they wanted to show students not only how the land can be used, but also many careers and opportunities which are open to them.

Along with local agencies and businesses the Rock Springs Chamber also plays a role. Erickson explained they start meeting in October and begin putting everything together. She explained that while some companies donate their time to be there, other companies make financial donations which help cover the costs of the event.

“It really takes quite a bit to put this together each year,” Erickson said.

Committee Chairman Tammy Valdez helps put it together from the corporate side of the event. She explained how it is important to not only show students and teachers but also help them understand all pieces of multiple land use.

While industry shows students what they do, Valdez said they also show the students how vital it is for them to do it responsibly. She also felt the career piece was a very important piece to the event.

“It is important to show the diversity we have in the area, in healthcare and business,” Valdez said. “It shows them they can stay and get a good job in the area. It also shows them the importance, math, science and language is to these jobs and how businesses use it.”

Some demonstrations included the UW Extension making smoothies using a bike and another student activity was a unique scavanger hunt.

Sweetwater County Engineer John Radosevich has participated in the event for many years. This year, the department would hide objects, and have the students use a GPS device to locate them. They also were showing the importance of math, teaching students how to calculate miles on a map.

“It’s great to be able to educate the younger students on what the county does while incorporating the usage of math,” Radosevich said. “I love it. It’s good to see the excitement of fifth and sixth-grade-students as you witness them learning.”

Another staple at the event has been Halliburton. For Karen Mills, this marked her fifth year at the event. She said it is still fun to be part of educating the youth in all aspects of resources. She added it has been fun as she has watched the third graders grow up and now as fifth and sixth graders run to the Halliburton booth and say this is our favorite.

Students jumped from booth to booth, most dressed in the latest hospital fashions from MHSC. They watched to see how fast a firefighter can get ready to go on a fire as Fire District No. 1 demonstrated this skill, horse and dog training, an up close look at a BLM fire truck and so much more. The students enjoyed while they learned.

Pilot Butte students, Filana Adkison, was a fan of the Bureau of Land Management booth while classmate Annika Syvrud liked the demonstration involving the outdoors at the Wild Natural Resource booth. Rachel Shuler enjoyed her time at the Wyoming Game and Fish booth and the information about fish in the area.
“It showed a diagram of what fish do and stuff,” she said.