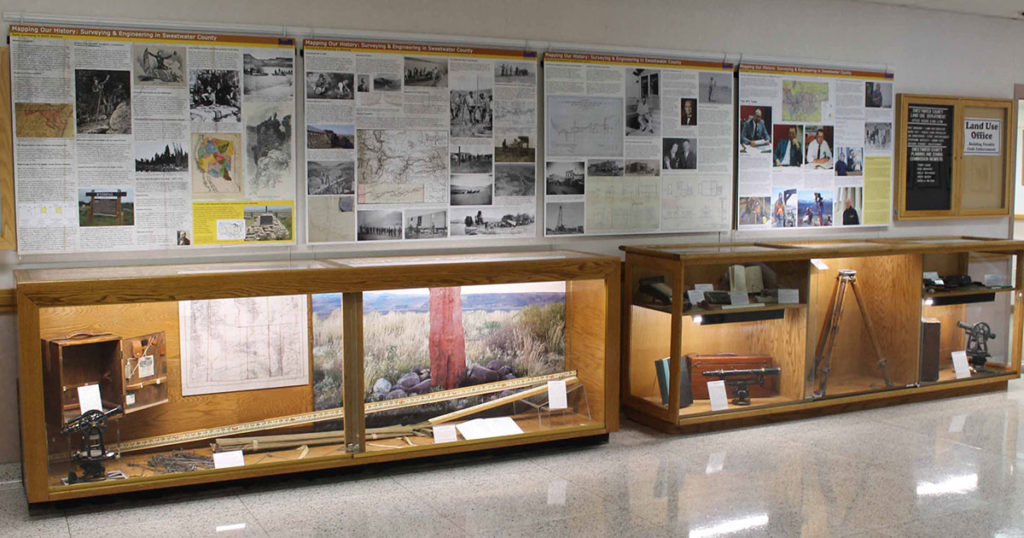 The new exhibit is an expanded version of a previous display of surveying instruments, books, and other items that belonged to the late Richard (Dick) C. Day, a distinguished former employee of Sweetwater County.

Day was an acclaimed civil engineer, land surveyor, and longtime resident of Rock Springs. Thanks to the efforts of Wayne Johnson, his former employer and colleague, Day’s collection was donated to the County Museum.

With the expansion, interpretive wall panels were added to the exhibit, featuring the history of surveying and engineering in Sweetwater County and the West. Contributors to the project’s content and research included Mary Dunnewald, Tom Crank, Wayne Johnson, John T. Nelson, Mark Kot, Gene Legerski, and County Commissioner Wally Johnson.

The exhibit is located in the hallway near the front entrance of the Sweetwater County Courthouse at 80 West Flaming Gorge Way in Green River. It may be viewed during business hours of 8 am to 5 pm, Monday through Friday.

Due to COVID-13 restrictions, the public may only enter the Courthouse through the front entrance on Flaming Gorge Way and are asked to exit the 2nd floor west entrance on North 1st West. Visitors are asked to observe social distancing and face masks, while optional, are recommended.

The County Museum is located at 3 E. Flaming Gorge way in Green River is open. Summer hours are Monday through Saturday, 10 am to 6 pm, and closed on Sundays and national holidays. Admission is free.