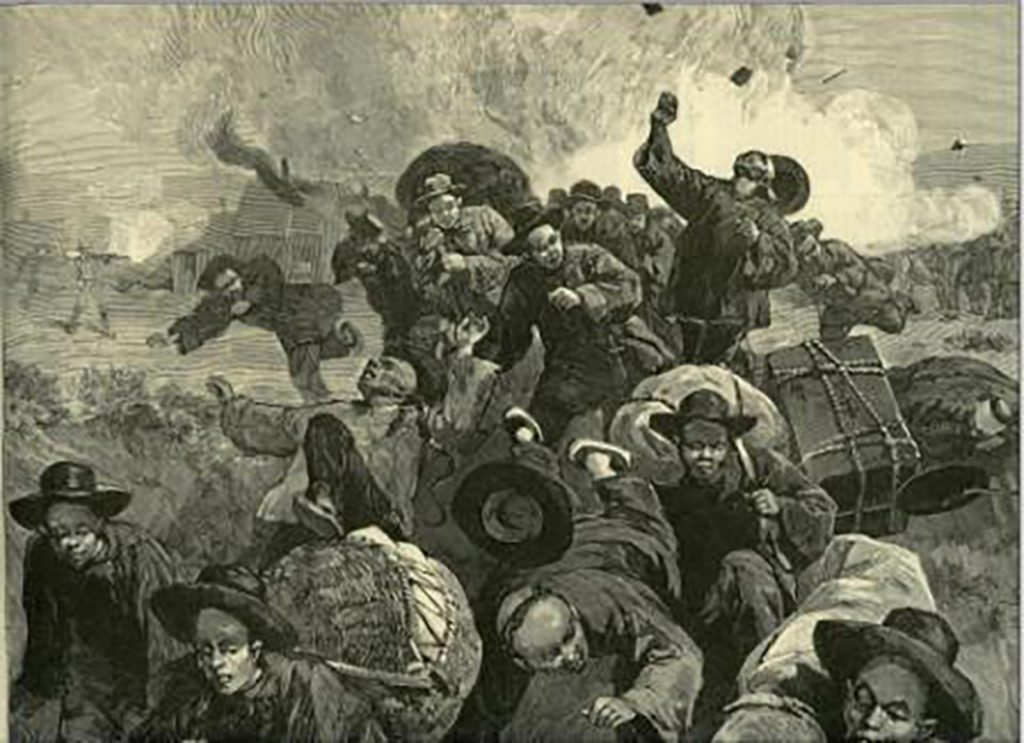 An illustration of the 1885 Chinese Massacre appearing in Harper's Magazine. Illustration courtesy of the Rock Springs Historical Museum.

The following feature is Part 1 of a two-part series on the Chinese Massacre that occurred in Rock Springs in 1885. Special thanks to Paul Murray for his research and writing, as well as Jennifer Messer and the Rock Springs Historical Museum for sharing the photos and illustrations for the piece. This article was originally published on Sept. 17, 2018.

It was an era of unabashed, unapologetic racism, exacerbated by the actions of both Knights of Labor and Union Pacific Railroad officials.

The labor movement in the United States was in its infancy during the 1870s and 1880s, and U.P. managers, such as President Jay Gould, the Eastern financier, among others, were not yet certain how to relate to the new militancy on the part of workers, who previously had been regarded as little more than pieces of the equipment in the business mindset of that day.

As for the workers, their knowledge of business economics and how businesses of that time had to operate during times of financial panic, was practically non-existent.

The Knights of Labor were ancestors to organizations such as the American Federation of Labor/Congress of Industrial Organization (AFL-CIO), the United Steelworkers, United Auto Workers (UAW), and the United Mine Workers.

Many of the members of the Knights of Labor, like the Chinese, were immigrants themselves.

Often from England, Scotland, Ireland, Cornwall, and the countries of Scandinavia, the immigrant Knights had come from Old World cultures which were only 150 or so years removed from the divine right of kings, and nobility, and had entered a culture in the United States in which Social Darwinism was gaining acceptance.

As a result, the demands of 19th century workers were often militant and non-negotiable. Nothing, however, excuses the riots of Sept. 2, 1885 and the destruction of lives which resulted.

The Chinese government received an indemnity from the U.S. Government, notwithstanding the attitude of federal officials in Washington, D.C. that there was no legal obligation to provide any compensation.

The Chinese government, for the first time, learned the importance of protecting its citizens abroad, and maintaining viable consulates in the U.S.

The Chinese Massacre in Rock Springs may even have triggered anti-Chinese violence in other places, according to an “On This Day” article in the New York Times archives for March 27, 1886.

The article states, “After the Rock Springs riot, anti-Chinese violence quickly spread to other areas in the West.

On September 11 (1885), Chinese were attacked in Coal Creek, Washington; on October 24, Seattle’s Chinatown was burned; on November 3, a mob of 300 expelled the Chinese in Tacoma before moving on to force similar expulsions in other towns…”

Chinese immigrants—almost always men—were not always so unwelcome in the 19th century.

The Chinese were made to feel welcome at first as they not only became prospectors working for mining companies that had hired them, but also providing needed services in California, particularly in San Francisco where most of them disembarked and in the Sierra Nevada mining communities.

Chinese immigrants took service jobs in the mining camps, such as laundry work and cooking. Others remained in San Francisco and did domestic work. Their numbers were relatively small at first.

However, the numbers of Chinese started to increase and they became more noticeable.

“A month later, at the first official meeting of Chinese residents in America, 300 Chinese gathered at the Canton Restaurant in San Francisco. During the first six months of 1852, 82 ships made the trip from Hong Kong,” Storti continued.

Then came the construction of the transcontinental railroad. The Union Pacific worked westward from Omaha while the Central Pacific, headed by magnate Charles Crocker, started building rail lines from Sacramento eastward across the Sierra Nevada.

Crocker was unable to find anything close to the manpower needed by advertising for workers in the California mining camps. The solution? Bring in Chinese immigrants.

Following completion of the transcontinental railroad, the perception of the Chinese worsened.

One out of every four Chinese was unemployed now, Storti says, as well as more than 13,000 whites who had worked on building the railroad. The financial Panic of 1873 was looming, and with the economy worsening.

“…[J]obs would be few, laborers a dime a dozen, and resentment against the Chinese would reach fever pitch,” he added.

Any financial and economic advances which the Chinese did make would come at the expense of white workers.

The willingness of the Chinese to work for lower wages than whites, in addition to their distinct and seemingly strange customs and religion, combined to fuel anti-Chinese hatred.

It was against this backdrop that the railroad strike of 1875 occurred. In his book, “Rock Springs Massacre 1885” Dell Isham divides the story of the Chinese Massacre into three essays.

Parts of the first essay read almost like an apology for the white workers who mined coal for the Union Pacific.

To be sure, the U.P. in the 1870s comes in for its share of criticism for demanding more output from the workers, for reduced pay.

That said, the impact of the Panic of 1873 put the U.P. in a financial bind as the price of coal dropped.

In 1875, the U.P. coal miners struck for higher pay, although actually they were simply striking for the return of their former wages. Workers had formerly been paid five cents per bushel of coal.

However, U.P. management promised workers that prices which the railroad charged for clothing and goods at its company stores would be reduced in order to lessen the impact of the wage cut.

With winter coming, the U.P. demanded a 25% increase in coal production. Speaking on behalf of the miners, union spokesmen declined the request to work longer hours.

Then, late in the year when the expected reduction in the prices of goods and clothing at company stores did not take place, tempers reached the boiling point and workers walked off their jobs on November 8, 1875.

The reaction of U.P. management to the miners’ complaints was predictable.

Isham quotes S.H.H. Clark, U.P. superintendent, just before the strike, asking the miners, “Does your union propose to dictate to this company regarding the amount of coal it is to mine?…Do you wish to cripple us in failing to give us an adequate supply of our own coal for the purpose of running our trains, and to supply the needs of the people residing along the line of our road who depend on us for the necessary fuel?”

“If that is your purpose, gentlemen, I herewith give you notice that in a very short time I will have a body of men here who will dig for us all the coal we want.”

U.P. management felt that the miners’ demand of returning to the five cents per bushel rate was unreasonable, given the economic situation in the country.

But, in addition, Isham says, railroad executives in the 1870s favored the firing of union agitators.

“To strike for higher wages was considered by many to be contrary to the natural laws of economics, detrimental to society, and even immoral.”

On November 21, Wyoming Territorial Governor John M. Thayer received a telegram regarding the situation in Rock Springs and requesting his intervention.

Thayer took the next train to Rock Springs and warned the miners against turning violent, although the miners denied any intention of turning to violence or property destruction.

With no territorial militia as yet, Thayer wired General George Crook at U.P.’s request to ask for help from federal troops.

Crook sent four companies of cavalry to protect railroad property. Two of the companies were stationed at Carbon and two at Rock Springs.

It would not be the last time that federal troops were stationed at Rock Springs to keep labor peace. The U.P.’s solution to the strike was simple.

The railroad shipped in 150 Chinese strike breakers, and the strike was ended in victory for the U.P. During the 10 years following the 1875 strike, the Union Pacific continued to employ Chinese coal miners.

Another 400 Chinese railroad workers arrived before the end of 1875. Complaints against the Chinese did not end with the strike.

Many white workers suspected or accused the U.P. of giving their Chinese employees special privileges.

Isham writes: “Privileges were given to the Chinese which the white workers resented greatly. The white miners’ accusations included the claims that the Chinese were hired in preference to whites, and that the whites were being forced to work where the Chinese would not.”

“Many believed that the Chinese were buying the best (mining) working rooms from bosses. Some complained that foremen refused to hear the grievances of white miners.”

“Another ground for complaint was that the Chinese would provoke fights knowing that the company would intercede on their behalf. The charge that the Chinese were hired first and were the last to be laid off was widespread.”

Whether or not the above contentions were true, that was the perception.

The newspaper of the time, the Rock Springs Independent, inflamed the brewing conflict further by charging that 100 whites were out of work while rail cars full of additional Chinese workers were arriving and being given jobs.

When white workers were hired, Isham adds, they sometimes were Mormons, scarcely more appreciated than the Chinese, since, like the Chinese, the Mormons would not join unions.

The Union Pacific had the power to crush any strikes or labor conflicts which might arise.

All of this prepared the powder keg to explode on September 2, 1885. No matter what real or imagined grievances the mostly immigrant white workers felt they had, it did not justify what happened next.

This is the end of Part 1 in a two-part series on the Chinese Massacre of 1885. Read part 2 here. 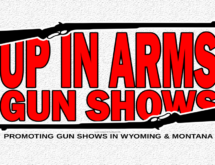 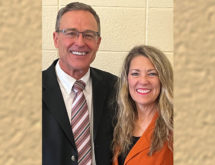