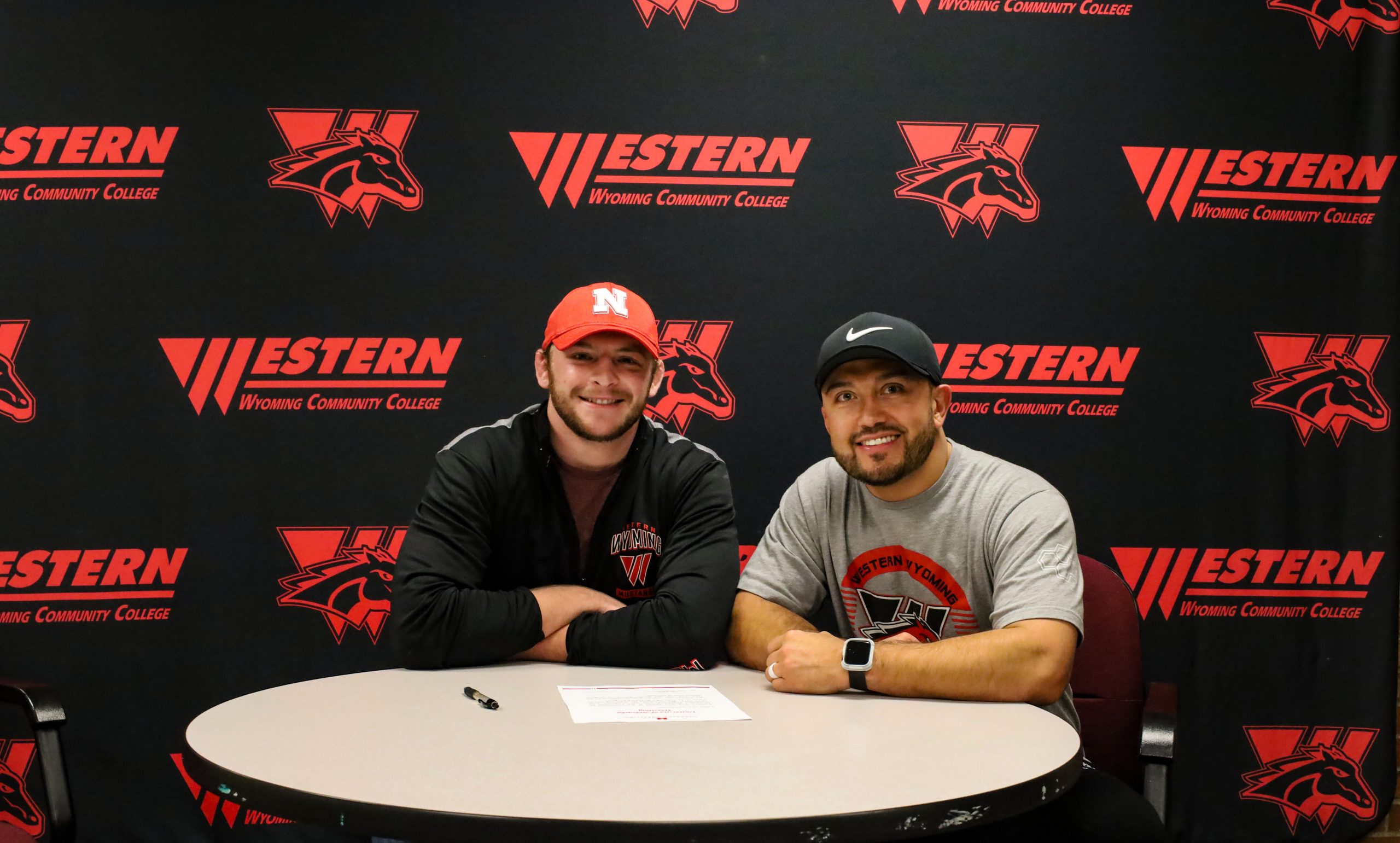 Landon Brown (left) and Art Castillo (right) pose for a picture after Brown's signing of his national letter of intent to wrestle for the University of Nebraska-Lincoln. Photo by Brayden Flack.

ROCK SPRINGS — Western Wyoming Community College wrestler Landon Brown signed his commitment letter with University of Nebraska-Lincoln on Wednesday afternoon. Brown joins a Huskers team that is one of the best wrestling programs in the nation. Nebraska has produced 101 All-Americans in the program’s history.

Before Brown moves to the Cornhusker State to join his future team, he has business to take care of as a member of the Mustangs wrestling team. With the end of the season rapidly approaching, the heavyweight hopes to leave a legacy and example that future Mustangs can look up to and remember.

Beauty in the Struggle

When Landon Brown arrived on the campus of Western in September of 2017, he wasn’t aware of the transformation that would accompany his collegiate wrestling career.

Fresh off of a two-year mission for The Church of Jesus Christ of Latter-day Saints in Guatemala, Brown joined the wrestling team halfway through the preseason.

“I came in barely speaking English, trying to catch up to these guys who are in a little bit better shape than me,” Brown said.

Not only was he trying to catch up with his teammates, but he was also trying to make up missed time in the classroom. Brown struggled during his first semester at Western and on the mat for the Mustangs. His social life was even messy.

Western head coach Art Castillo noticed that his newest wrestler was in a bind. Being the mentor that he naturally is, Castillo took Brown aside and had a heart-to-heart conversation. In that conversation, Castillo suggested that they go back to the drawing board and minimize distractions. After the discussion, there was a new beginning for the young Mustang.

“He had all the excuses to say that it wasn’t for him,” Castillo said. “But he and I had a real heart-to-heart conversation about things that matter in life and refocusing and putting all your energy into those things that matter.”

“That heart-to-heart during my first year really hit me,” Brown said.

Setting aside the past, Brown refocused on controlling what he could in the classroom. He also decided to get a few more workouts in during the day. During practice, he took on the toughest wrestlers in the room including Wade French who was a 197-pound national champion for the Mustangs. The work was challenging but rewarding.

“It’s really good to look inside yourself and think about what you can do to push a little harder and be more. That’s something I’ve really learned while I’ve been here at Western,” Brown said.

Castillo realized that he had made a mistake with Brown. Instead of using him as a 184-pounder, he challenged Brown to gain weight and serve as a heavyweight. The two decided it was best to redshirt his freshmen year. Although he was a bit skeptical, he agreed to Castillo’s request.

“Once again he believed in me,” Castillo said.

Brown’s weight has fluctuated and he’s been as high as 240 pounds, but the results on the mat took a dramatic turn for the better with the change. During the 2018 season, Brown qualified for the National Junior College Athletic Association Wrestling Championships in Council Bluffs, Iowa.

“Last year helped me to see that things were coming together,” Brown said.

After losing in the first round of the national tournament, it was Castillo reminding Brown that the match didn’t define who he was, but that he had another opportunity to rewrite the narrative. What took place after that first round remains a very special moment for the star wrestler.

“The most special memory I have here is last year when I was at nationals. There were ups and downs in that tournament. I went in there and wrestled a kid that I didn’t really know and he beat me in the first round. That was definitely a good time for me to look inward and see who I was. I had a tough tournament and I went and won seven straight matches, a lot of them in overtime, to come back and take third,” Brown said.

“The thing that made it even more sweet was being able to wrestle at the same time as my friend Connor Kirkland. He was wrestling across the mat. I won and took third and then I turned and saw that there was about 20 seconds left on Connor’s mat. I watched the rest of his match and he won. We met in the middle. It was magical, really special. Just to be able to celebrate that with him and then go and celebrate and point at our crowd. That was definitely a special moment,” Brown said.

Brown’s third place finish was an unforgettable comeback. It was a story similar to the comeback he had previously made in his academics and athletics.

“You can’t just come from the situation he came from to where he’s at without laser focus and being able to receive criticism and overcome many hardships, and that’s exactly what he did,” Castillo said.

“It’s easy to see on the screen that this guy is good. But I got to see the transformation of Landon Brown,” Castillo said.

Brown’s passion and hard work earned him several looks from several different NCAA Division I programs. Oregon State, Iowa State and Wyoming were all interested in bringing Brown into their fold. Castillo contacted Nebraska’s assistant coach, Brian Snyder, earlier this season. Nebraska expressed that they had interest in Brown and longtime head coach Mark Manning called and scheduled a visit.

“I went out there and had a lot of fun,” Brown said. “Great coaching staff, great people. The guys I was able to meet were just outstanding human beings. I liked that a lot because that’s what Art talks about a lot is being good people. All of the coaches and wrestlers I met exemplified that and I felt like I was at home. I loved it.”

The successful visit stamped his decision to join Nebraska’s program. Castillo believes that his signing with the Huskers shows exactly what the Mustangs’ system is all about.

“It kind of speaks to our system a little bit, where a guy can go pretty much un-recruited to a top-five, Division I school, in The Big 10, two-and-a-half-years later,” Castillo said.

With the season winding down, Brown’s goal is to finish as a national champion and help the No. 1 ranked Mustangs win a national title. In order to achieve this goal, he’s going to simply put in more work.

“I’m going to have to put in some more work. I can’t just come into practice because everyone in the country goes into practice. You can’t set yourself apart by just doing that,” Brown said.

Castillo believes that Brown’s signing will propel him forward and release some untapped potential.

“I think him signing today is going to help him. I think he’s been hanging on to a lot of things and having a lot of pressure on him. Being ranked number one all year and this lingering in the background of where he’s going to be next year. Now I’m confident that he’s going to free-flow a little bit and remind himself of what got him here to this situation,” Castillo said.

“We’ve just got to keep moving forward and I’m really excited. The brotherhood we have in the room just makes you want to work for each other,” Brown said.

Through the forces of mentorship, adversity and focus, Brown has not only transformed his life with the Mustangs, but his future as well. 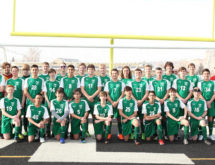