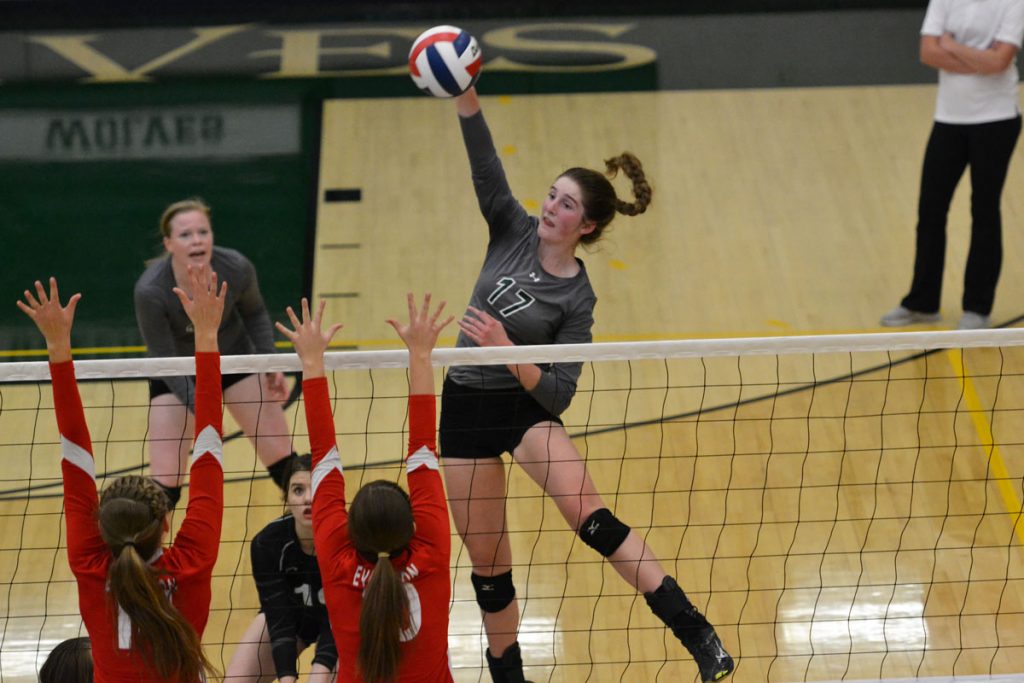 GREEN RIVER– The Green River Lady Wolves volleyball team set a goal this season to secure one of the top seeds in the 4A West Conference, and they succeeded, going into the state tournament as the number two seed with a bye.

All-Conference players Hannah Hix (senior), Andri Dewey (senior), and Katie Banks (junior)– Dewey and Banks also earned All-State honors– helped lead the Lady Wolves to a successful season, though these three girls will not take much of the credit.

Five Words to Play By

The culture of this year’s volleyball team was a very united one, building their team around five core values: family, trust, dedication, respect, and encouragement.

“We really focused on having those words become a part of the culture for the Green River volleyball program,” Hix said. “I think we worked really well together because of those five words.”

Anyone who watched the Lady Wolves play this season could see the chemistry they had on the court. Banks credits much of this chemistry to simply practicing together.

“Every time we were together, we were able to push each other and build those relationships,” Banks said.

Along those same lines, Dewey believes this chemistry came from playing together over several years.

“Many of us have played together for a long time so we’ve become very close, and that definitely makes it easier out on the court,” Dewey said. “We know each other’s tendencies and how we’re going to react when put into certain situations.”

Banks also says the team worked so well together because of the senior players: Dewey, Hix, Megan Yoak, Braylee Scicluna, and Georgina Barrios.

“They really stepped up this year, taking the time and effort to encourage everyone into always giving their best,” Banks said of the seniors. “They knew how to push us, but in a good way. I could not have asked for better seniors this year.”

Favorite Moments From this Season

“This year came with a lot of favorite moments, but some moments that stand out to me the most were our comeback against Natrona, and of course the big rivalry games against Evanston are always exciting,” Dewey said. “Honestly, every moment I get to spend with my team and coaches is my favorite moment.”

The team was very close this year, making the season enjoyable no matter what adversity came their way. Hix said that they had to rely on each other during the challenges they faced as a team.

“Some of my favorite moments this season were just all the times I was with my teammates and coaches. They all truly made every day enjoyable for me,” Hix said.

Though the team got work done on the court, they also knew how to have a good time, and Banks said the moments where they were having fun standout to her.

“My most favorite moments happened when we were laughing, both on and off the court. Our team knows how to be serious and play, but we also know how to have fun and keep each other’s spirits high,” Banks said.

Along with wanting to get a top seed in the conference, the girls also set the goal to win state, and although they did not achieve this goal, they are proud of the improvements they made throughout the season.

“I think we improved so much as the season went on. We set some really high goals for our team this season, and I know that everyone did everything that they could to reach those goals. It was huge when we saw ourselves checking off those goals that we set,” Dewey said.

Banks said that she believed the team had an “amazing” season from start to finish, “from taking second in the conference and getting a bye to state, to our first tournament win in Cokeville at the beginning of the season,” Bank said.

The team finished the season with a 19-15 overall record, and a 6-4 conference record.

“It feels so awesome to receive these awards. All glory to God for sure,” Banks said. “I’m so happy that God has given me the ability to play volleyball, and that I have the honor to receive All-Conference and All-State.”

Banks averaged 3.6 kills per set and 0.7 blocks per set, with an average of 0.6 solo blocks, and 0.3 block assists. She ranks second in the conference in attacking and in blocking. She also ranks fourth in the conference for serving, sixth for passing, and eighth for digs.

Banks also lands in the top 10 attackers and blockers in the state for the 4A class. She ranks fourth in attacking and sixth in blocking. She finished the season with 415 kills.

“I feel that I have improved quite a bit from last year. My mom and dad have helped so much,” Banks said. “They support me, and will go to they gym with me in the off season. Therefore, I have improved most on my hitting.”

Most people would not enjoy being on the receiving end of Banks’ arm. However, she explained that though she has always had a powerful swing, she never placed the ball to a specific area before this season.

“Last year, I hit the ball hard, but not aiming towards any one spot. This year I have worked hard on placing the ball better, whether down the line or sharp cross.”

Though the 2017 season is over, Banks will continue to work on her volleyball skills, as she hopes to secure a position on a collegiate team after her high school career.

“I am working extremely hard to play collegiate volleyball. I would be ecstatic if I were given an opportunity to do so,” Banks said.

While she is practicing for next year’s volleyball season, she is also looking forward to playing her other favorite sport, tennis. Banks competes on the GRHS spring tennis team.

Dewey earned both All-Conference and All-State honors this season for the second year in a row.

“It’s something I would’ve never imagined for myself, and I know that it wouldn’t have happened without the people that support me and push me to become better every day,” Dewey said. “It feels really good to be recognized for my hard work with an award like that.”

Dewey finished the season ranking first in the conference in assists, with 8.3 assists per set. She also ranks third in the conference for serving, and fifth for blocking with 0.5 blocks per set, 0.4 solo blocks and 0.2 block assists.

She also ranks second in the state in assists for the 4A class.

Personal Goals for the Season

“Some of the personal goals I set for myself this season were to become a better leader, and to improve my skills in the setting position, and I think that as the season went on the improvement was more noticeable.”

Dewey recorded 941 assists throughout the 2017 season. Though she recognizes that she made improvements this season, she does not claim full responsibility for her accomplishments.

“I improved a lot from last season, and I think all the credit needs to go to my teammates and coaches. If it weren’t for their constant pushing to become better, and to work just a little bit harder, I wouldn’t have accomplished the things that I did,” she said.

GRHS Volleyball Holds a Special Place in Her Heart

Now that the volleyball season is over, Dewey will turn her attention to basketball, and then track after that, where she is an All-State sprinter. However, the senior will always carry her experiences with the GRHS volleyball program with her.

“My experience with GRHS volleyball wasn’t the best at first, but I couldn’t have asked for a better end. It will always hold a special place in my heart,” Dewey said.

Hix’s accomplishments on the court this season earned her recognition with her first All-Conference honor.

“It feels amazing,” Hix said. “It is just another testament that hard work pays off.”

End of the Season Stats

At the end of the season, Hix ranked number nine in passing in the 4A West Conference, and number four in attacking, with an average of 3.1 kills per set.

She also ranks sixth in the state for the 4A class in attacking.

“I think I improved a lot from last season. I became a lot more confident in my abilities, and I became a better player thanks to my other teammates for pushing me and reminding me of our goals,” Hix said.

Hix was a major asset for the Lady Wolves this year, totaling up 360 kills throughout the season.

“One of my personal goals was to become more of a threat as an outside hitter and I felt like I improved so much as the season went on with the help of my coaches and teammates,” Hix said.

Up Next for Hix

The senior will shift focus to basketball season, which will start up after the Thanksgiving break, but she will miss all of her experiences with the volleyball team.

“One thing I will miss about GRHS volleyball is all of the memories and good times I got to share with my teammates and coaches,” Hix said. “This program has treated me very well, and it has taught me many things that will help me in my future.”

Though her future is a little undecided as of now, Hix plans on attending college next year.