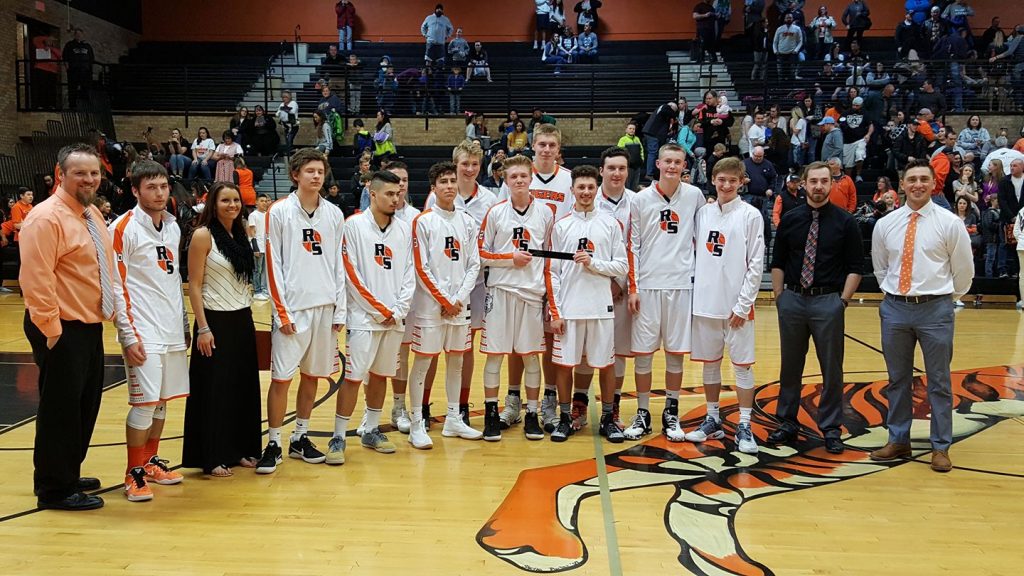 CASPER – A wild run in Casper came up just short Saturday night. The Rock Springs Tigers had several chances but could not get rebounds late while the Kelly Walsh Trojans hit free throws down the stretch to pull away and take the 4A state title, 62-49.

Just like a heavyweight fight, the Trojans and Tigers traded big shots to open the game. Three pointers by Trevor Hautala and Nick McMurtrey were matched early as the teams remained even at nine midway through the first. Kelly Walsh hit a three with three minutes which sparked a  12-0 run as the Trojans jumped up 21-9. Kelby Kramer ended the run at the end of the first as the Tigers trailed by ten at the end of one, 21-11.

Kael Mikkelsen hit his first two to start the second as the Tigers cut the lead to single digits. After four straight by the Trojans, Hautala and Kramer matched with field goals. After another KW bucket, Brady Arnoldi hit a big three to pull the Tigers back within seven, 27-20, with 4:12 left in the half. Kramer hit two free throws to pull the Tigers within five but the Trojans answered with five straight to jump back up ten. With just over two minutes left, a three by Hautala and a three-point play by McMurtrey sparked a 6-2 run as the Tigers trailed by six. Neither team could score in the final minute of the half as the Tigers trailed at the break, 34-28

Kramer scored the first four of the half for the Tigers but Kelly Walsh answered each time. Arnoldi eyed another three and hit nothing but net as the Tigers pulled within four, 39-35. Kelly Walsh went back to work with two but a Kramer dunk sparked another Tiger run. Mikkelsen cut the lead to two and Kramer evened the game at 41 at the foul line. The Trojans hit a three to end the run and added another bucket to jump back up five. With under two minutes in the third, a Hautala drive pulled the Tigers back within three. After another Trojan bucket, Mikkelsen hit with five seconds left to keep the Tigers within three, 48-45.

Kelly Walsh scored the first six points to take a nine-point advantage midway through the fourth. Kramer finally put the Tigers on the board in the final quarter to pull the Rock Springs back to seven, 54-47. Kelly Walsh worked the clock and extended the lead back to nine. Kramer responded with a bucket as Rock Springs remained within seven with just over two minutes to go. The Trojans added two free throws with a 1:40 to go to take a 56-49 lead. Rock Springs had chances to cut into the lead but missed several shots. They were forced to foul and although the Trojans missed several, the Tigers failed to get on the boards giving the Kelly Walsh several foul shots late. Rock Springs never got a good look the rest of the game as the Trojans were able to take the 4A title, 62-49.

The two Tiger seniors led the way for Rock Springs in their final game. Kramer finished with a double-double scoring 18 points and grabbing 10 rebounds while Hautala added 13.  McMurtrey, Arnoldi and Mikkelsen all added six in the loss.