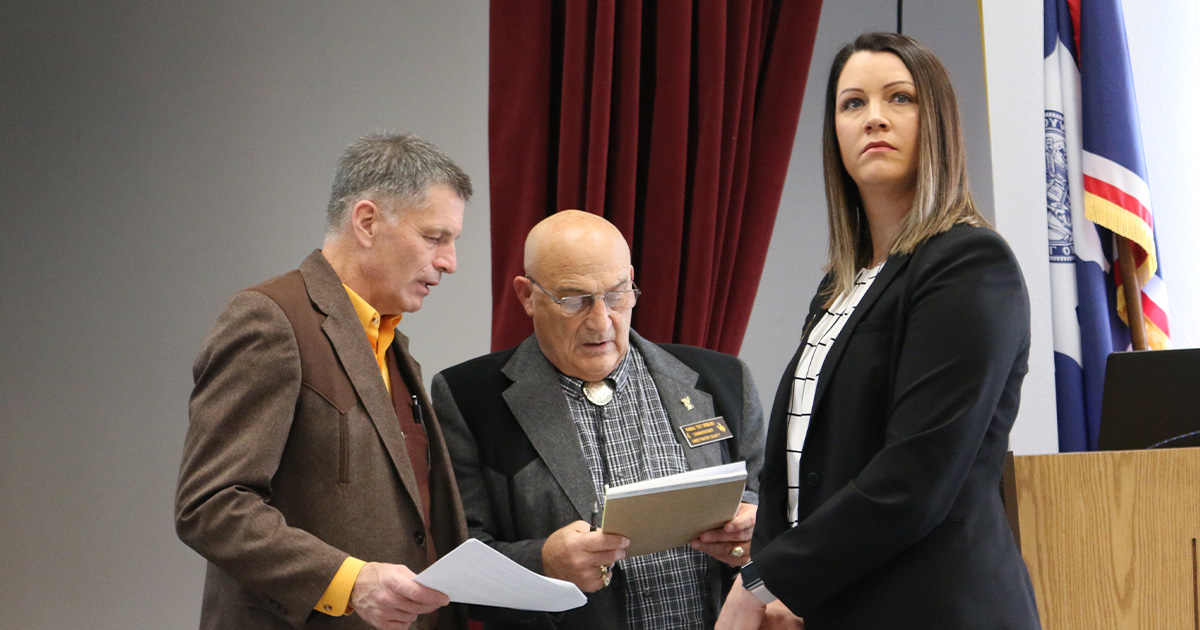 ROCK SPRINGS — About 40 residents took time to attend the migration corridor listening session to give suggestions or ask questions.

On Saturday, Governor Mark Gordon visited four communities; Rock Springs, Rawlins, Pinedale, and Kemmerer, to listen to and visit with residents about the Migration Corridor Executive Order (EO) draft. The event was cohosted by the Wyoming County Commissioners Association and the Sweetwater County Commissioners at the White Mountain Library.

The EO contains many of recommendations from the Migration Corridor Advisory Group, which met three times in 2019, according to a press release. Items listed in the EO include changes to the process for officially designating a corridor, the establishment of area working groups for corridors considered for designation, and a requirement to actively engage landowners prior to corridor designation.

He said the animals must be moved from North to South and the bottlenecks near Pinedale, including Fremont Lake and new subdivision, aren’t helping.

For example: Highway 28 is a barrier. Even though fence modification has taken place, it’s still not enough. He said the best solution would be to build a migration corridor overpass over Highway 28.

“We had a wide array of opinions on the group,” Marty Stearns, advisory group member, said.

The complexity of dealing with federal and state regulations, federal surface ownership, state and private ownership. The group focused on maintaining the integrity of the corridors.

“Our thought and I think the impetus for the EO was it’s best handled here on the ground in the State of Wyoming, as apposed to in Washington, D.C.,” he said.

Dan Stanton, migration group representative, who sat on the migration advisory group, said coal was on its way out 10 years ago and oil and gas will not last forever. The last thing the state wants to do is look back and wonder where all the antelope and mule deer went.

“It’s all about balance and I think the governor is trying to strike that,” Stanton said.

Michelle Irwin, Wyoming Outdoor Council board member, Powder River Basin Resource Council and rancher said with the coal closures, more pressure will be out on the area to use other natural resources.

“We want to make sure that energy development is done responsibly regardless of the source,” Irwin said. “We want to ensure the survival of our wildlife and know that to do that we must protect their habitat.”

Through better planning, energy development can take place where it should, she said. Wyoming needs to protect its unique migration corridors.

The state’s first industrial solar project was built in Sweetwater County right in the middle of a documented antelope migration route, but it didn’t have an official designation status, the project was complete with the predictable results.

“All future projects in the state should learn from this very bad example,” Irwin said.

Mary Thoman, Sweetwater County Conservation District chairman, said it’s hard to draw a line in the sand and designate a corridor. She suggested getting private property owners involved will be the key to the migration corridors’ success.

Gov. Gordon said the state will not impose additional burdens on the private land owners, but will offer support of state agencies if they need them.

“These routes are a learned pathway,” Matt Cuzzocreo, Wyoming Wilderness Association, said. “Deer don’t move around. They don’t move away from the known path.”

They will spend one third of their year migrating to and from their summer and winter habitats, he said.

Cuzzocreo suggested the Wyoming Game and Fish should be mentioned under a whereas statement as the science-based management agency.

“The deer that went through there, they don’t do through there anymore,” Burd. “We found out late, too late, that those deer had to have that area, that buffer zone, to travel through there. Seventy two percent of the deer herd there perished. They couldn’t get to their winter grounds, so they died.”

Burd said he know that history and it wasn’t too long ago in 2005.

“We can’t have another thing like we had in Pinedale, where we lose 72 percent of the deer herd,” Burd said. “Those migration corridors are crucial.”