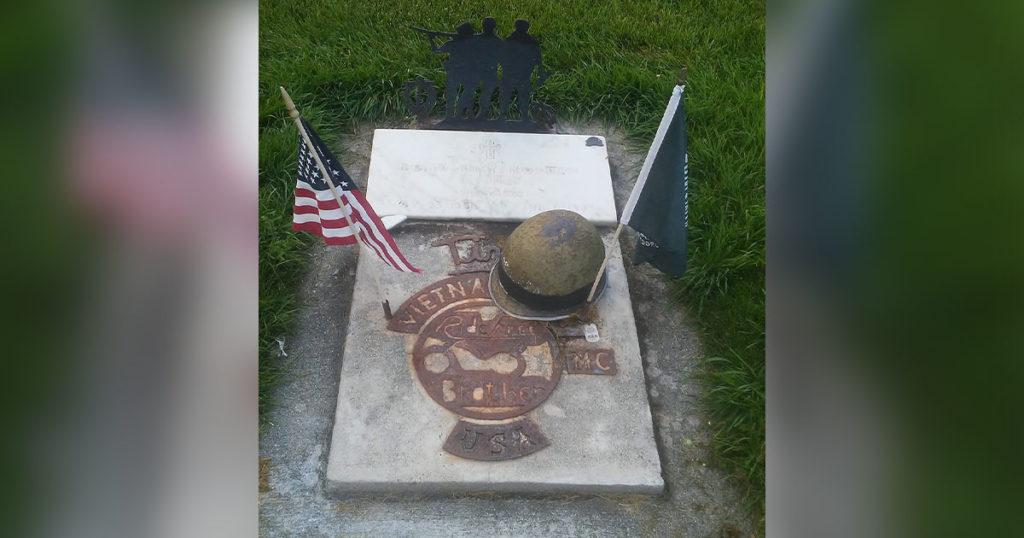 The helmet of Vietnam Veteran Boyd Holden was recently stolen from the Riverview Cemetery in Green River. The family is asking for the person who took it to return it. Photo courtesy of Sarah Holden

GREEN RIVER — The daughter of a Vietnam Veteran is asking for the person who stole the helmet from her father’s gravesite to please return it.

Sarah Holden said sometime after July 6 the helmet was taken from her father’s gravesite at the Riverview Cemetery in Green River. She said she and her daughter were visiting his gravesite that day because that was the day he died.

About a week later, Holden visited her father’s gravesite again and the helmet was gone. Holden didn’t know what to think of the helmet missing. She couldn’t believe anyone would have taken it so she called the cemetery employees to see if they had moved it. Not only had they not moved it, but they were also upset that is was missing, she said.

Holden then called all of her family and friends to see if they can removed it for some reason. But as each family member told her they had not, a realization started to sink in that someone stole it.

“I have no idea why it was stolen. It’s been there 25 years and never been touched and the cemetery crew allowed it to stay there,” Holden said.

It was at this point that Holden notified the Green River Police Department on July 29 about the helmet being stolen. According to the GRPD’s August 1 press release, this case is still under investigation.

I’m pretty upset about this. Never did I think something like this would happen. It means everything to me and my family, but nothing to a complete stranger. I would like to ask them to just return it. No questions asked.

She’s pleading with whoever took the helmet to just return it and wants them to think about how they would feel if someone took something from them that they had to remember a loved one who passed away.

“It’s not like I can just order a new one. My dad wore this while fighting for us. He deserves to have it put back,” Holden said.

A search around the cemetery and surrounding area by officers yielded no results. If you have any information or tips on what happened to the helmet, please reach out to the GRPD at 307-872-0500.