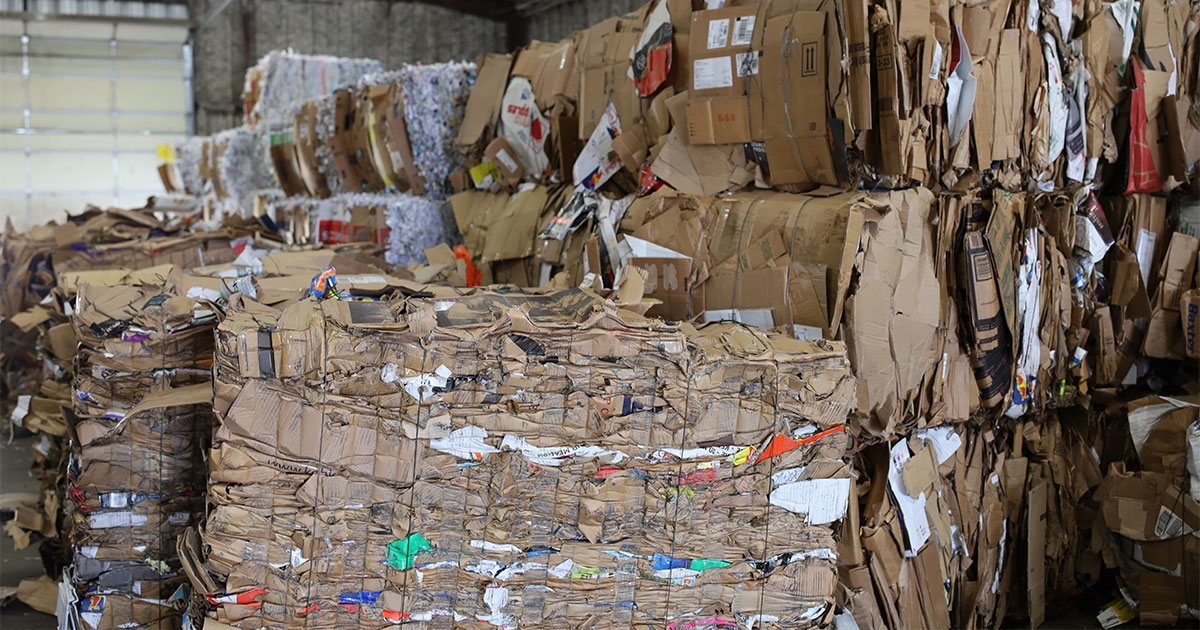 ROCK SPRINGS — A worker tosses garbage bags full of plastic into the back of a white pick-up and as he does a loose Skippy peanut butter jar escapes the pile and rolls along the asphalt towards my feet. “What about that?” I say, pointing to the jar that’s still coated in peanut butter.

The answer is no, the jar won’t get recycled. It’d be too labor intensive to clean every un-rinsed piece of material and the Ray Lovato Recycling Center doesn’t have the facilities and equipment to do that.

Maybe I shouldn’t admit this, but on a recent Thursday afternoon I found myself sitting at my desk waiting out the clock, searching desperately for something to write about. Slow news day.

I don’t know why, but there was a Patagonia catalog sitting on my desk. I picked it up and started flipping pages. Turns out it wasn’t a catalog, but a 38 page pamphlet on all the ways Patagonia uses recycled materials. Pages six and seven displayed an Image of the Mobro garbage barge.

A caption informed me that in 1987 the barge spent two months at sea looking for a dumpsite for 3,100 tons of New York City trash. A giant banner on the side of the barge read, “NEXT TIME … TRY RECYCLING” and in smaller letters, “GREENPEACE.”

Simple enough. Or is it? Maybe you’ve wondered what happens to your recycling once you drop it off or after it gets picked up from the curb. I’ve had that question myself. Especially since Changes to regulations in China have had a major impact on the recycling industry in the United States. I’ve seen plenty of suspicion that recycling is wasted effort, that, “It all just ends up in the dump anyway.”

Rather than spend the remainder of my afternoon watching the clock tick down, I decided to find out more about what happens to recycling here in Sweetwater County. I sent an email to Devon Brubaker, he’s a board member for the Ray Lovato Recycling Center. Brubaker was happy to hear I was interested in learning more about local recycling and quick to suggest how I could. “There is no better way than to get your hands dirty!” he said in his reply.

That’s how I ended up spending a couple hours sorting recycling and learning that un-rinsed peanut butter jars do in fact end up in the landfill. However, based on the time I spent sorting through plastic, tin and aluminum containers and loading cardboard into a bailer, I can report that almost everything dropped off at the recycling center is not ending up in our local landfill. The material is getting sold to brokers. The main brokers that the recycling center in Rock Springs works with are Sage Recycling, Interwest Paper and Centennial Paper.

For Brubaker, who says he’s “the farthest thing from a tree hugger,” recycling is all all about numbers. It takes money, time and resources to manage and cleanup landfills. Anything that gets recycled not only avoids filling up landfills, but is also a useful commodity. But the bottom has fallen out of the market for recycled materials and that’s had a big impact at the Ray Lovato Recycling Center.

The center makes money and stays operational be selling materials to brokers and prices for those materials have dropped drastically over the last year. The price for recycled cardboard has gone from $170 a ton this time last year to just five dollars a ton now. Office pack has dropped from $180 to $60 per ton.

The center recycled 1.252 million pounds of material last fiscal year, which amounted to $52,000 in revenue. At this point in the last fiscal year, the center would have already hit somewhere between $14,000 and $17,000 in revenue, compare that to just $1,823 in revenue generated so far this year and the situation created by recent market changes starts to look pretty bleak. Especially when you keep in mind that it takes $10,000 to $12,000 a year just to maintain the center’s bailer.

However, if you make a trip every week or so to drop off cans, bottles and cardboard at the recycling center, don’t panic that you’ll soon be deprived of the opportunity. Brubaker is fairly optimistic about the future of recycling in Rock Springs. The center just received grant funding to completely renovate the drop off area out front. Those renovations will bring improvements that will help streamline the material sorting process. The center also receives funding from both the City of Rock Springs and the Solid Waste District.

For the moment, the center is just trying to find space to hold on to as much material as possible, hoping for markets to take an upward turn. Of course, the biggest expense for the center is paying employees. Makes sense to me, after getting just a small taste of the time and man power it takes to sort through all that material and weed out the peanut butter jars that are still covered in food waste.

If you’re really concerned about helping sustain recycling in Rock Springs, the center accepts help from volunteers whenever they’re open. And if you want to find out more about what material the center accepts, check out the facebook page.

Of course, what I’ve written here doesn’t actually answer the question of where your recycling ends up, the Ray Lovato Recycling Center is only the first stop. Maybe in a future story I’ll follow some recycling to the next step in the process.

Last time I wrote about waste in Sweetwater County, I made the mistake of only finding out how things work in Rock Springs and many readers pointed out that it’s different in Green River. Cognizant of that, I made sure to reach out to the Green River Transfer Station, to see if I could come see what happens to recycled materials there. The person I spoke with said I needed to talk to the site manager and gave me the number for the Wyoming Waste Systems automated payment system.

I’ll plead ignorance on what happens to your recycling in Green River and also say that Wyoming Waste Systems clearly doesn’t want me to know. So, if you live in Green River and are one of those who says, “Don’t bother with recycling, it all just ends up in the landfill.” Well, I don’t have any information to prove otherwise. Meanwhile, Wyoming Waste Systems has been evasive and is clearly not interested in opening their operations to public scrutiny.