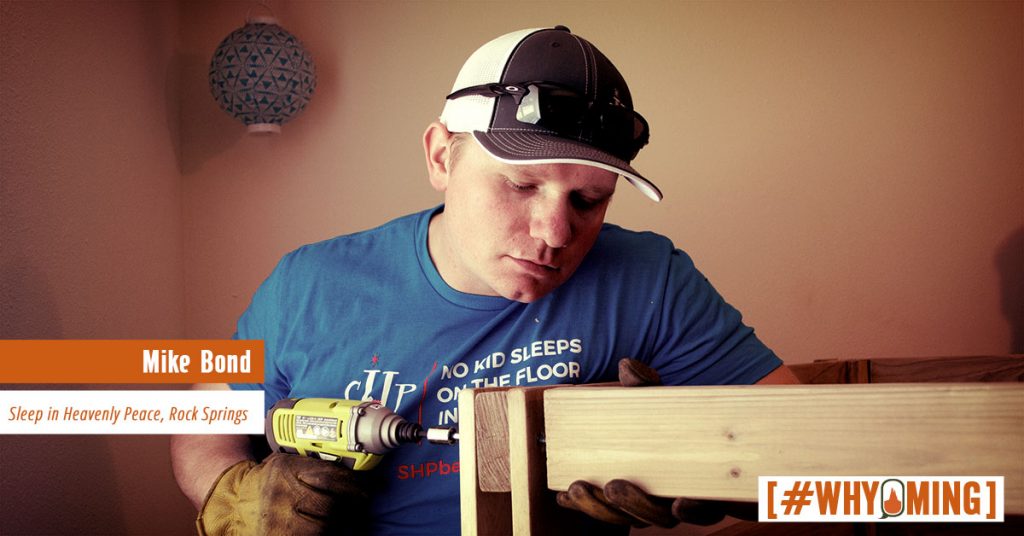 This week, I had a chance to sit down and talk with Mike Bond, the president of the Rock Springs Chapter of Sleep in Heavenly Peace. Mike works full time for Old Dominion Freight Lines, but he still dedicates time to give back to the community he grew up in.

In addition to his work with Sleep in Heavenly Peace, he is also on the chair for Sweetwater Against Trafficking. Mike makes it a priority to make his community a better place for everyone.

Mike, how did you get involved in Sleep in Heavenly Peace (SHP)?

I actually saw a Facebook video of it on an episode of Returning the Favor. Mike Rowe does the series and he just goes around the nation looking for do-gooders. Me and my wife had been looking at ways to give back to the community, because I grew up in Rock Springs and she grew up in Green River.

I showed my wife and told her I really wanted to at least look into this. She’s the realist and I’m the dreamer so she keeps me grounded. At first she said no, because we just got married, we just bought a house, so she didn’t see how we could do it.

But it turned out that it didn’t cost anything to start it. We just had to take over the chapter and get going.

A few of the recipients of SHP beds.

What do you enjoy about working with Sleep in Heavenly Peace?

I love getting kids off the floor. There are a lot of situations we walk into where the parents are just barely getting by and beds are kind of an unusual request.

When you think of people who fall on hard times, especially in our community with the boom and bust, the first few things they worry about are food, clothes, shelter, stuff like that. But a lot of times, at the end of the day there’s no money left for a bed.

Making the beds for them is one way that we can show them that not just us, but our whole community really cares about them. It takes a community to build these beds and to get all the money and supplies together, and build them and deliver them. It takes everybody.

I’ve never even tried to leave. I’ve always lived here. I grew up here and went to school here. I’ve never felt the need to leave. I really like Rock Springs, it’s a good town. It’s got kind of a bad reputation from its past, but there’s a lot of different things going on now that are kind of bringing it to what it is now.

Oh man, I don’t know. I love video games, I’m kind of a nerd. I really like singing. I did a competition three years ago and I did really well in that. I actually won that. I thought for a little while that I was going to be some singing star, and then I wasn’t.

I’m one of those guys that’s not really good at any one thing, I’m just kind of good at a lot of little things. I’m learning a little about a lot.

One of my biggest hobbies that I’m really passionate about is lifting, going to the gym, staying fit. I think that in today’s world, there’s a lot of ways that people can be lazy and lose their way physically, and there’s a lot of people with body image issues.

I feel like some of the best ways to fix some of those issues is by getting up and going to the gym. It’s hard when you start, but once you really start going, you create a habit and it’s something that really sticks with you. Fitness is something I’m really passionate about, and hopefully it will have something to do with my career in the future.

I’m also starting to do some social media stuff. That’s a hobby right now. I’m getting into social media management. I run the social media for Rock Island Gym. I’m still a newbie in a big pond, but I like doing that stuff. I’d like to turn it into a career in the future.

This community is super giving. Not even talking about SHP, this community really pulls together. With us, it was kind of a slow start because we had to get our name out there, but the response to Sleep in Heavenly Peace that we have gotten from our community has been awesome.

We’ve had no issues with finding volunteers for build days. We’ve had no issues raising money. Unfortunately, there are a lot of requests for beds that come in, but it’s just a super giving community and everyone really loves helping. And it’s just not something you’d expect from a boom and bust community. We’re kind of an underdog.

In my short 28 years of being on this earth, I would say, find your why. Just figure out what you want to do, find your why, and just go for it.

Rock Island Gym. I spend so much time there. I love the environment there, the people, and I love lifting as much weight as I can and hopefully not breaking myself. 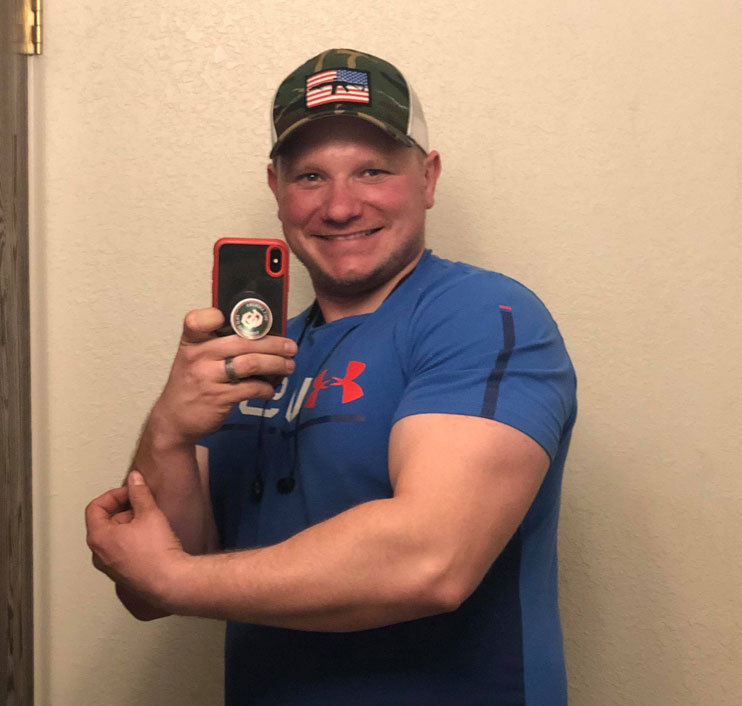 Nine months out of the year, I would drive my truck, because I’m very proud of my truck and the fact that me and my wife were able to buy it. I went from a crappy relationship where I got a divorce and had a bad credit score, to being able to buy a nice truck, so I’m proud of it, and I’m proud of what it took for me to get there.

But during the summer time, I love riding a bike. Especially in the downtown area, because there’s just so much history in Rock Springs.

It used to be Friends in Low Places by Garth Brooks, just because I can sing it really well. But man, there are a lot of songs.

This is going to sound really cheesy and mushy, but I would sing Then by Brad Paisley, and I would make sure my wife was in the crowd because I would sing it to her.

Well, it would depend on which friend you ask. I would hope that they would describe me as a hard working individual who works towards the goals that I want.

Also, that I’m the kind of guy that you can call and I’ll always be there for you. I take a lot of pride in that now, because I wasn’t that person in the past.

And that I can lift a lot of weight in the gym.

I’m very proud of where I’ve gotten Sleep in Heavenly Peace. It’s been a lot of work and for the first seven months, me and my wife were doing it pretty much by ourselves. That was my fault because I didn’t find a team, I thought I could do it all by myself.

I’m really proud of the fact that I had the idea to start it, and followed through, and it’s at the point it’s at now because I never gave up on it.

There were times when money was tight, I didn’t have time, and SHP kind of fell on the back burner, but I always came back to it. And that’s kind of the way I want to live the rest of my life. When I set a goal, I want to strive towards that goal until I get it, and then I want to keep going. I want to beat it.

And I’m really proud I got my wife, because she’s way out of my league.

First person who comes to mind is Chris Hemsworth because he’s freaking gorgeous and I’m totally comfortable in saying that. I like the roles that he’s played. It would be him or Chris Evans. They both play characters I feel like I relate to because they stand up for what’s right, they’re big strong dudes, and they’re good people. And Chris Hemsworth in real life is just awesome. Plus, he’s blonde and blue eyed, and that’s me.

I love Wyoming because we have a lot of freedom still that I think a lot of other places don’t have. No matter your political association, whatever side you choose to be on, I feel Wyoming is still growing.

I’ve always been more conservative but I would love to take the morals and the good things that Wyoming has to offer and spread that everywhere. When the University of Wyoming came out with their slogan, “The World Needs More Cowboys,” I think that’s spot-freaking-on. 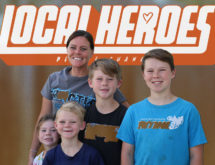