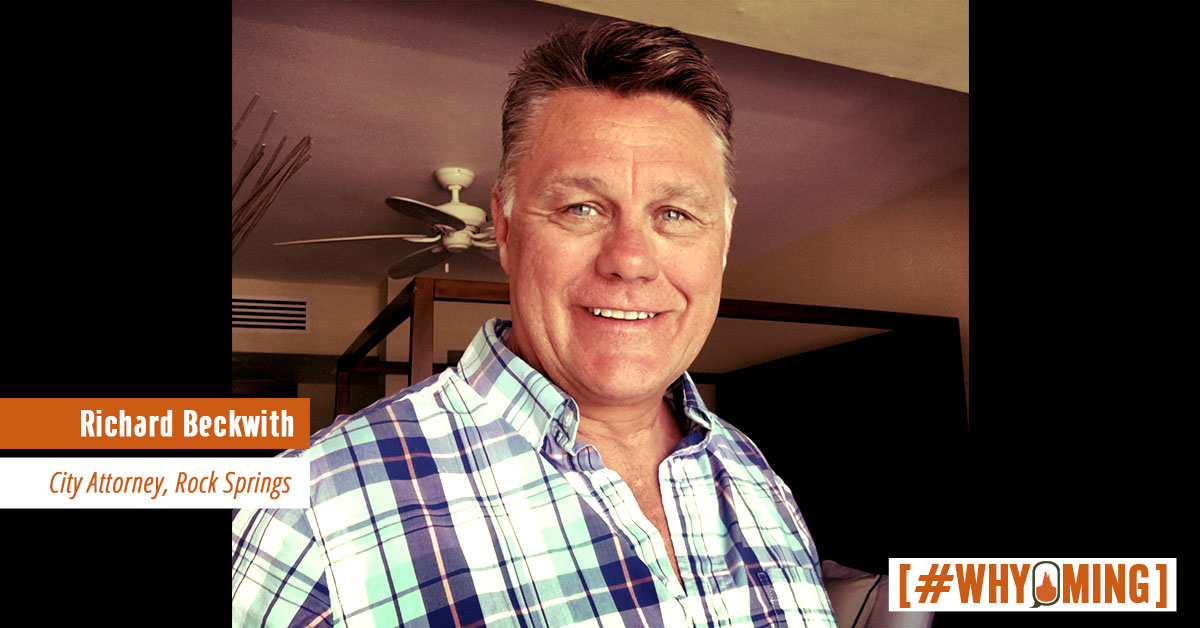 For this week’s #WHYoming, I had a chance to sit down with Richard Beckwith, Rock Springs City Attorney. Richard has been the City Attorney for two years but has been practicing law for over 25 years.

However, before Richard made law his career, he followed what he calls his “true passion” by performing music. Richard started playing the drums at 8-years-old after watching the Beatles on the Ed Sullivan Show. In addition to music, he is also a member of the MUFON international Board of Directors, and serves as the State Director for Wyoming.

Richard, How long have you been the Rock Springs City Attorney?

What does the job of City Attorney entail?

Being the City Attorney requires me to draft resolutions and ordinances, review contracts, defend the City against lawsuits, render legal opinions on a wide variety of matters, and consult the Mayor and the Governing Body on any matters that may legally affect the City. I feel very fortunate to have served two great mayors and to work with councilors who truly care about the City and our community.

I hear you are an awesome drummer. Can you tell me about your musical background?

I really appreciate that, but I would say I am “competent.” I am not so sure about awesome. I started playing drums when I was eight years old. Ed Novotny was one of my first teachers. I had seen the Beatles on the Ed Sullivan Show and thought Ringo was the coolest guy in the world. He wasn’t out front getting the girls like John, Paul, and George. No, he was in the back just keeping it all together.

I spent the entirety of my youth dreaming of being a real musician and wound up being in many, many, many bands, including a band with my 9th grade English teacher. I managed to make a living at it for a few years, and loved every minute of it. The best part is that I made some good, lifelong friends along the way.

Music has been and will always be my true passion. I may even go back on the road after I retire. This time, I don’t think I’ll be wearing spandex or bleaching my hair.

Which bands or artists have inspired your interest in music and drumming?

I love jazz, fusion and rock. My influences were bands like the Mahavishnu Orchestra and Frank Zappa. My other influences included bands like Yes, Rush, Kansas, Boston, Styx, Kiss, the Tubes, CCR, Nightranger, and Van Halen.

Can you tell me about your involvement with the Mutual UFO Network (MUFON)?

I am presently a member of the MUFON international Board of Directors and serve as the State Director for Wyoming. MUFON, or the “Mutual UFO Network,” is an international, scientific organization dedicated to study of UFOs for the benefit of humanity. MUFON is behind some of the popular shows regarding UFO’s on the History Channel such as, “Hangar 1: From the Files of MUFON.”

Our only purpose is to gather investigative data on Unidentified Flying Objects. When someone sees something in the sky that they cannot identify, MUFON investigates and makes a determination whether the object is identifiable. When something cannot be identified, we simply call it an “unknown.” We do not chase aliens.

I am proud to say that some of the data from MUFON’s investigative files was used to justify further study of the phenomenon to Congress. There is currently a program on the History Channel called “Unidentified,” starring a friend of mine named Luis Elizondo, the former head of the “Advanced Aerospace Threat identification Program” (AATIP) for the Department of Defense, which exposes AATIP and its conclusions.

After reviewing hundreds of UFO incidents involving military encounters with UFO’s, AATIP concluded that UFO’s are not only real, but that they exhibit flight characteristics that far exceed the capabilities of any known aircraft, and could represent a potential threat to national security. These objects have no discernible means of propulsion and no external flight surfaces such as wings, vertical or horizontal stabilizers. They hover silently, and accelerate instantaneously to speeds well beyond the limits of any known aircraft without causing a sonic boom. They operate equally well in air, water, and space. I can also confirm that material from some of these crafts have been recovered and is being analyzed. In particular, I am aware of the existence of at least one type of “metamaterial” that reacts when exposed to high frequency radiation by, “apparently”, losing its mass.

Those of us who study this phenomenon felt truly vindicated last year when Luis addressed the crowd at the MUFON Symposium and stated unequivocally that, “You were right.” When the head of the government program that studies UFOs says you were right, it means something.

My family moved here exactly fifty years ago this last December. My father had been working for Cheyenne Light Fuel & Power and got a job as a millwright welder here at the Jim Bridger Power Plant. Dad moved here first and lived in the Rex hotel until Mom came with my sister Lori and me during Christmas break in 1968. My little sister Lisa was born that spring.

I left Rock Springs and moved to California to pursue a career in music. I played in a couple of bands out there and then got a job in a Midwest, heavy metal band called “Justin Morgan.” After a couple of years on the road, and after seeing how long my roots were getting, I reached the conclusion that I was never going to be a rock star and that my father was right when he said I needed something to “fall back on.” That’s when I decided to go back to school. It was 1986.

I attended the University of Nebraska at Lincoln for one full school year, and then moved back to Wyoming to attend the University of Wyoming. I earned a B.S. in Molecular Biology and then a Juris Doctorate. When I graduated from law school, I held my diploma up and said, “Look Pop, I have something to fall back on.” My dear friend Gary Greenhalgh offered me a partnership straight out of law school, so after taking and passing the bar exam, I came back home to Rock Springs to stay. That was precisely twenty-five years ago.

I can pop my hip out of joint any time I want.

Rock Springs is more than a community, it is a family to me. I can honestly say that I love Rock Springs and the people who live here. My whole life is here. How much can you say about the home you love?

Be true to yourself. Follow your heart, and work hard. Also, never play cards with someone whose first name is a city.

I love being in the Desert, especially on a clear night. I’ll take White Mountain, Pilot Butte, Boars Tusk, or the Sand Dunes any time. Sometimes I don’t think we realize how truly lucky we are here to be surrounded by so much open range and federal lands that we can just drive to and walk around on. Most people in this country don’t have that.

Ride a bike– because I just bought a brand new mountain bike.

“Levon” by Elton John, because I know it well and it’s in my range. I would never sing otherwise because I truly stink as a singer. Really.

My best friend Mitch Bullock used to call me a smart, dumb bas***d, implying that I am intellectually intelligent yet lack a certain modicum of common sense. My other friends would probably tell you that I am a relentless hugger and that I am not afraid to say, “I love you.”

Getting a job that did not require me to use hairspray, dig holes, or put things in boxes.

Will Ferrell, because of his outrageous good looks and the sheer athleticism he brings to roles such as “Chaz Michael Michaels,” “Ricky Bobby” and “Ron Burgundy.”

Wyoming, like Rock Springs, is my home. I might consider living somewhere else if the hairs on the back of my neck didn’t stand up every time I got near the state line. I’ve lived out there in the real world and I am here to tell that Dorothy was right. There’s no place like home. I trust the people here. Wyomingites are genuine and kind, and would give you the shirt off their backs even if they’ve never met you.