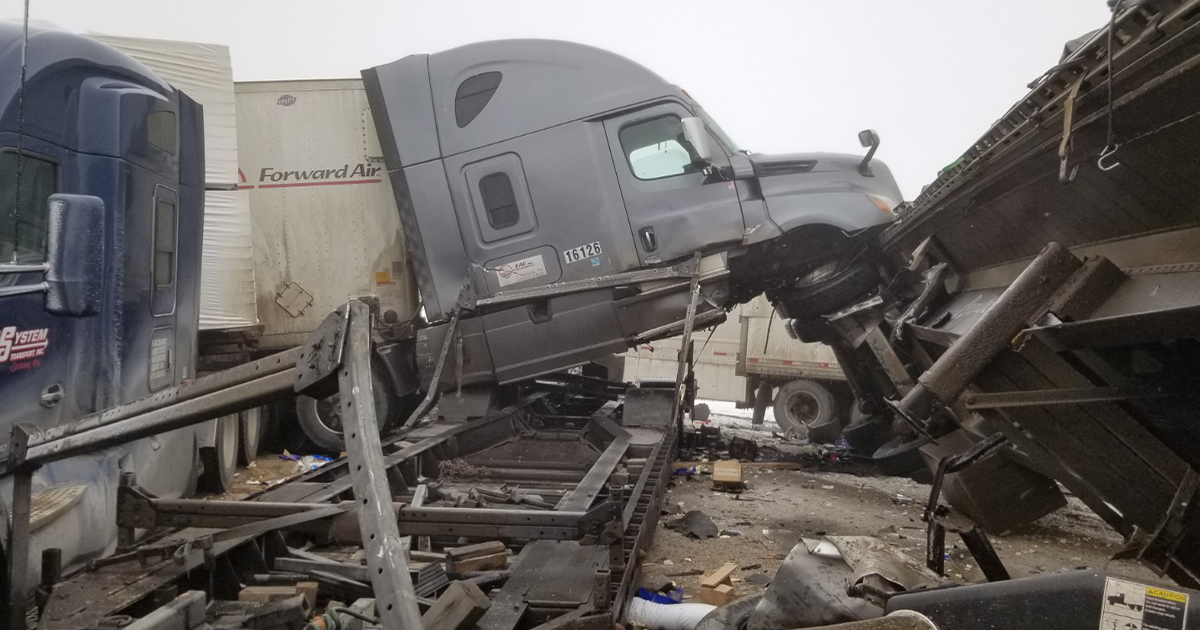 This is just one of the photos the Wyoming Transportation Department shared March 20.

CHEYENNE — When Laramie resident Roy Snow set out for a doctor’s appointment Friday morning, he had no idea fog and slick roads would send him into the ditch and other vehicles crashing into each other.

According to a press release from the Wyoming Highway Patrol, a 27-vehicle crash, including 23 commercial trucks, took place around 10:18 a.m. yesterday in the eastbound lane of Interstate 80 around milepost 331. At the time of the crash, there was dense fog and slick road conditions.

Snow, who was at the scene of the crash, made a couple videos of the crash and shared his story and those videos with SweetwaterNOW.

A former Rock Springs’ resident and Albany County School District No. 1 bus activities’ driver and former volunteer firefighter, Snow was driving from Laramie toward Cheyenne on Interstate 80 when he encountered some fog between 10-10:30 a.m.

As he continued to drive his dark gray, Ford F250 truck, he reduced his speed to about 30-35 mph to adjust to the thickening fog conditions.

Snow then saw a bunch of vehicles piled up and decided to turn left and drive his vehicle toward the median. Shortly after coming to a stop, he said he stayed in his vehicle.

When Snow exited the vehicle, his firefighter instincts kicked in and he started going from vehicle to vehicle to see if anyone needed help. He stopped at a black truck jammed between two semi-trucks. Several people were trying to get a guy out of the truck, but his legs were pinned.

“We just hung out there until the emergency folks showed up,” Snow said.

Once emergency personnel arrived, Snow walked around to see if anyone else needed help. He spoke to a man who had been driving a small red car. The man told him his arm was sore. Snow looked from the man to the car.

“I was like ‘dude you are lucky,'” Snow recalled saying to the man.

Snow said he had never seen anything like it even during his volunteer firefighting service. Snow said he knew just how lucky he was not to have been struck by another vehicle or injured in the crash.

“It was completely just a mess,” Snow said. “I was counting my lucky stars and saying prayers.”