CHEYENNE – Wyoming and Colorado have filed for a preliminary injunction in the state’s case against BLM’s hydraulic fracturing rule. The states ask the court to prevent the BLM’s rule from taking effect until their cases have been fully resolved. The rule is set to take effect June 24, 2015.

“Wyoming has led the way in creating safe, responsible rules for hydraulic fracturing – rules that have been in place for years,” Governor Mead said.  “It makes sense to wait until Wyoming’s case is resolved to enact a rule that complicates compliance and hurts our economy.”

The Federal government will have until June 12, 2015, to file a response to Wyoming and Colorado’s motion, unless the Court grants an extension of this deadline. 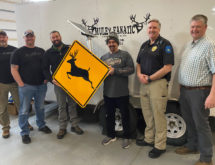