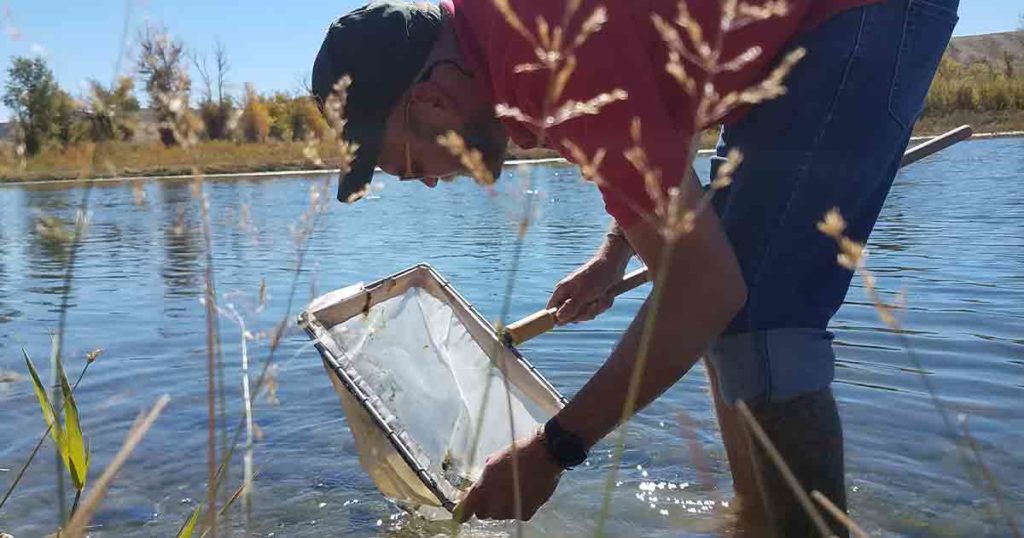 GREEN RIVER— The menace of invasive fish and other aquatic species despoiling native Wyoming fish and aquatic plant habitat is picking up, although still not on a par, thankfully, with the problems that other states are having, particularly the Great Lakes. The invasive species issues that Wyoming does have are becoming problematic enough, however, according to Wyoming Game and Fish spokespeople.

Most people are aware of the burbot problem in Flaming Gorge National Recreation Area. Burbot was a species of fish that was originally found east of the Continental Divide but which has since moved into Flaming Gorge Reservoir, apparently as a result of deliberate action by an overeager fisherman.

“Somebody wanted the fish closer to home and so they introduced it, we think around Fontenelle Dam,” explained Eric Hansen, an Aquatic Invasive Species (AIS) specialist with the Wyoming Game and Fish Department office in Green River.

Usually, however, invasive species introduction is not done deliberately, but inadvertently. That’s why education about invasive species is so important, especially as it relates to how invasive species can be unintentionally introduced unawares by people coming in from one area to another, said Robin Kepple, an information specialist with WG&F.

Invasive species transmission may not always be obvious; thus the need for boat inspections. Eggs, larvae and seeds can introduce invasive species as well as deliberate placement of invasive critters in a non-native environment. Between March 1 and November 30 of each year watercraft must be inspected prior to launch. Inspection of watercraft coming in from “high risk” areas, such as the Great Lakes, is a year-round requirement, Kepple said.

Many people are unaware that it is not just invasive fish which can interfere with a native fish habitat. One of the most persistent invasive species in Wyoming is actually the New Zealand mud snail. As its name implies, this tiny creature is a native of New Zealand and Australia and has migrated, probably by ship across the Pacific Ocean, into several states including Wyoming. It is a prolific reproducer, Hansen said, since a single New Zealand mud snail can clone itself and thus quickly populate an extensive freshwater environment.

Invasive aquatic plants also have done their share of damage to Wyoming waters. “Plants have become a nuisance in themselves,” Hansen said, adding that in particular, curly pondweed has damaged native aquatic environments, including in southwest Wyoming.

“It’s an ornamental plant found in home aquariums. People have dumped curly pondweed out into five or six different waters and it grows rapidly,” Hansen said. “It becomes a dense mat of vegetation around docks. There’s no way to eradicate it other than manually. Boaters need to make sure it’s not sandwiched on their anchor or around their anchor.”

Recently another invasive species, the rusty crayfish, was found in Wagonhound Creek near Laramie. Hansen said the rusty crayfish is a “bait forage” type of creature and that most likely it was dumped into the creek by a fisherman.

“Invasive species harm or cause biological disruption,” Hansen said. He added that invasive species have no “checks and balances” because they are not in their natural environment with predators which control their populations.

Eradication of AIS is possible in waters with specific conditions (such as being in an enclosed system), but is difficult to impossible in most situations. Hansen said.

“One example is of the New Zealand mud snails. Since they only need one asexual female to reproduce via cloning, and have the ability to close themselves off within their shell if danger is sensed, chemical or environmental, they are not able to be eradicated using most traditional methods,” Hansen said. “Eradication typically involves a chemical treatment as well, and ends up harming native species.”

One thing that people need to educate themselves about is that there are potential consequences for individuals who willfully introduce invasive species. “If we know who they are, or if we find out who they are, there could be fines and litigation,” Hansen said.

“Burbot reproduce exponentially,” Hansen said. “The burbot fishing derbies have helped keep their numbers in check.” The AIS specialist acknowledged that burbot are ugly-looking creatures but he encouraged fisherman to catch them anyway. “Burbot are good eating.”

Other species that have come into Wyoming either by intent or by their own upstream movement have been managed to the extent that they are now considered sport fish, including a few species native to the Great Lakes and other eastern and midwestern waters.

“Lake trout are in certain drainages in Wyoming, including Flaming Gorge Reservoir, and are not technically on the invasive species list. Lake trout have been here historically,” Hansen said.

Yellow perch and walleye, familiar fish species for sportsmen in Minnesota, Wisconsin and their neighboring states, have been successfully managed for years now, Hansen explained.

There are other more threatening species which Hansen and Kepple said are not currently in Wyoming but which could be on their way here without preventive measures. Zebra mussels, found in profusion in the Great Lakes and some states near Wyoming, are notorious for clogging city water pipes and attaching themselves to boat anchors and docks.

Asian carp are another species which both WG&F agents said are nearby, in North and South Dakota, and hopefully will not get any closer to Wyoming than that. “Asian carp are river fish and dams help check their upstream progress somewhat,” Hansen said. He added that Asian carp react particularly strong to boat motors, jumping out of the water in response to the motor noise and sometimes slapping boaters in the face and even occasionally knocking them out cold.

Hansen’s bottom line was that people who introduce non-native fish and plant species either intentionally or inadvertently may think it is a benign activity because they may not see immediate changes for the worse based upon what they have done. But time will show the environmental chaos.

“Southwest Wyoming is fairly new to the AIS sphere, with positive identification of New Zealand mud snails and curly leaf pondweed popping up here just recently,” Hansen said. “Probably the largest impact we have seen statewide so far is the dock and bay choking effects of the pondweed at Keyhole Reservoir. Generally, once an invasive species is introduced, it can take many years for just how much damage they may cause to become apparent.”

Further information regarding watercraft inspection requirements and regulations can be found by logging onto the Wyoming Game and Fish website, in particular at: wgfd.wyo.gov/Fishing-and-boating/Aquatic-Invasive-Species-Prevention/AIS-Boating-Information.