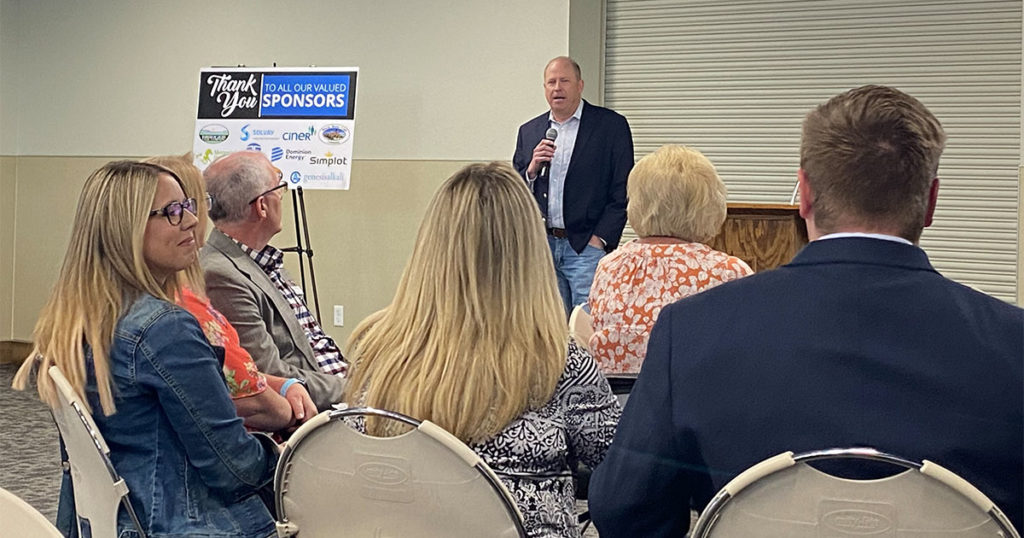 ROCK SPRINGS — Wyoming Secretary of State Ed Buchanan visited with Sweetwater County residents Monday afternoon to discuss election myths and what processes Wyoming has in place to ensure its elections are secure and conducted with integrity.

Buchanan told constituents at the Sweetwater County Events yesterday that ever since the 2016 election, the Secretary of State’s Office has received more questions regarding the integrity and security of Wyoming’s election process placing the process under a microscope for review.

Wyoming has continued taking strides to improve its voting process since 1973, Buchanan said. The state most recently installed new voter machines statewide and the Wyoming Legislature approved a bill requiring residents to provide a form of identification when voting at the poll.

With all of the rumors about the integrity and security of elections going around Buchanan decided to visit numerous counties to dispel any election myths.

Buchanan explained how the election process works. After a resident votes and places their ballot into the voting machine the results are placed on an encrypted media stick. When polls close these sticks are collected and usually brought to the county clerks by law enforcement officials. Once the stick is at the clerk’s office, it is then placed into a computer. This computer’s sole purpose is to take the information off of that data stick and convert it into a PDF document.

These results are then placed on a different USB stick which is then placed into a different computer that has internet access. The results are sent in an encrypted email from the county clerk’s office to the Secretary of State’s office. A Secretary of State’s office official will call to double check that the clerk’s office did in fact send the email and will verify the election information sent. This is why it takes the state some time to compile all of the state-wide election results.

“I don’t have the election results as quickly as the county,” Buchanan said.

While the machines do have the capability to connect to the internet, the software and hardware were not purchased by the state to do that. Buchanan said only eight counties were interested in having machines with internet connectivity and the state didn’t want to add more cost to the already $5.4 million project. He said keeping the machines from having internet is another way of keeping them secure.

Wyoming is the least populated state and it doesn’t take long to receive the results the “old fashioned way,” he said. It is also a state that has all of its results revealed on election night.

Myth 3: Wyoming voting machines can still be physically breached.
Buchanan said anything can be breached but the probability of this happening to a voting machine is low due to the strict protocols the county clerks follow. Residents are not allowed access to the machines outside of placing a ballot in them. The state received funding to make sure all of the machines have a dedicated area for storage, video surveillance, and locks. The locks and seals on the machines themselves will show if a machine has been tampered with. Gone are the days where the voting machines were just stored in a courthouse basement, Buchanan said.

Documents on the Wyoming Secretary of State’s Website, show that agreement was created in October of 2005. All clerks’ offices in Wyoming use the same machines purchased from Elections Systems and Software Inc.

After going over the most common myths, Buchanan turned his focus to remarks made at the recent Trump rally in Casper from Mike Lindell who claimed Wyoming’s votes were off by 20,000 votes that should have been for President Donald Trump in the 2020 election. Buchanan pointed out that the math Lindell was using wasn’t even accurate. Lindell claims President Trump received 193,559, while Joe Biden received 73,491, but President Trump should have received 204,781 and Biden should have received 62,269. According to Lindell’s numbers, that’s a 11,222 difference, not 20,000.

Lindell also claimed Wyoming IP addresses were used to cause 22,444 votes to move from Trump to Biden. Buchanan said all they had to do was type in all the IP addresses to find out none of them originated in Wyoming and that those votes weren’t accurate. Plus, the election took place on November 3, 2020, and the majority of IP changes were dated for November 5 through 7.

Buchanan said Wyoming gave former President Trump the largest victory over any other state with 70 percent of Wyomingites voting for him over Biden in the 2020 election. He said Wyoming’s reported numbers for the 2020 election were accurate because there wasn’t a difference in the results obtained from election night and the review of the canvassing board.

“If they were stolen midstream, I would have had different results,” Buchanan said.

Buchanan also looked at Wyoming’s voting history to see if the votes were following historical trends. The numbers showed they were following normal trends. Only one other presidential candidate received more than 70 percent of the state’s votes, which was in 1984 when President Ronald Reagan was elected. Back then, 73 percent of all Wyoming voters voted for President Reagan. So other than this stat, the 2020 numbers followed historical election data.

Buchanan told the gathering thatWyoming will continue to improve its election procedures. He said that in 2021 Sweetwater, Laramie, and Natrona Counties participated in a pilot audit process to check the machines. This audit showed they were 100 percent accurate. He plans to roll this program out statewide to ensure all machines are operating at 100 percent accuracy.

He would also like the Wyoming Legislature to pass laws prohibiting ballot harvesting and prohibiting the use of private and corporate funds to conduct elections. He wanted to make it clear that while this doesn’t seem to be an issue in Wyoming it’s best to be proactive instead of reactive. More information about Wyoming elections, can be found on the Wyoming Secretary of State’s website.