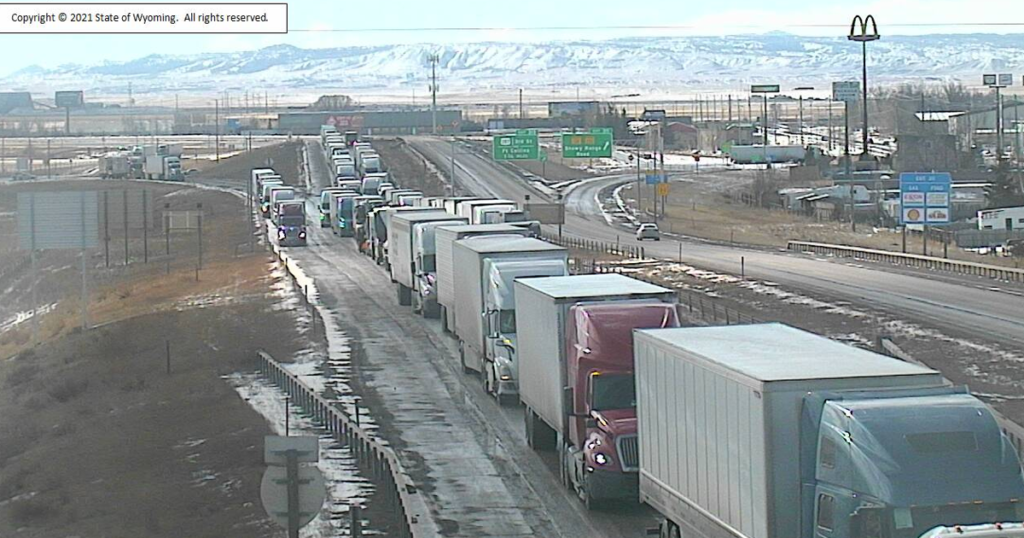 I-80 backed up due to a crash in February in Laramie. (WYDOT)

NOTE: The initial version of this story mistakenly reported that the Senate defeated the legislation. This is inaccurate as the bill passed on a vote of 16-13. This story has been corrected. We regret this error.

CASPER, Wyo. — The Wyoming Senate rejected an effort to create authority for an Interstate 80 tolling program on Friday, March 19.

The Senate defeated Senate File 73 on a third reading vote of 16-13. Sen. Bill Landen (Natrona), who voted on the prevailing side, motioned for an immediate reconsideration of the bill after the third reading vote.

The legislation would have given the Wyoming Transportation Commission and the Wyoming Department of Transportation the authority to develop a tolling program in order to “finance, construct, operate and maintain Interstate 80 and accommodate the needs of the traveling public through safe, efficient, convenient and modern vehicular traffic.”

The tolling program would have aimed to allow I-80 “to be operated in a way that will reduce traffic congestion, delays, hazards, injuries and fatalities.”

“To carry out these purposes, it is necessary to authorize the Wyoming transportation commission to create and supervise a tolling program within the department of transportation to impose tolls and exercise other powers regarding interstate 80 that are necessary, equitable and appropriate,” the failed legislation states.

The third reading 16-13 vote to defeat the bill was as follows:

The motion to reconsider failed on the following 10-19 vote: