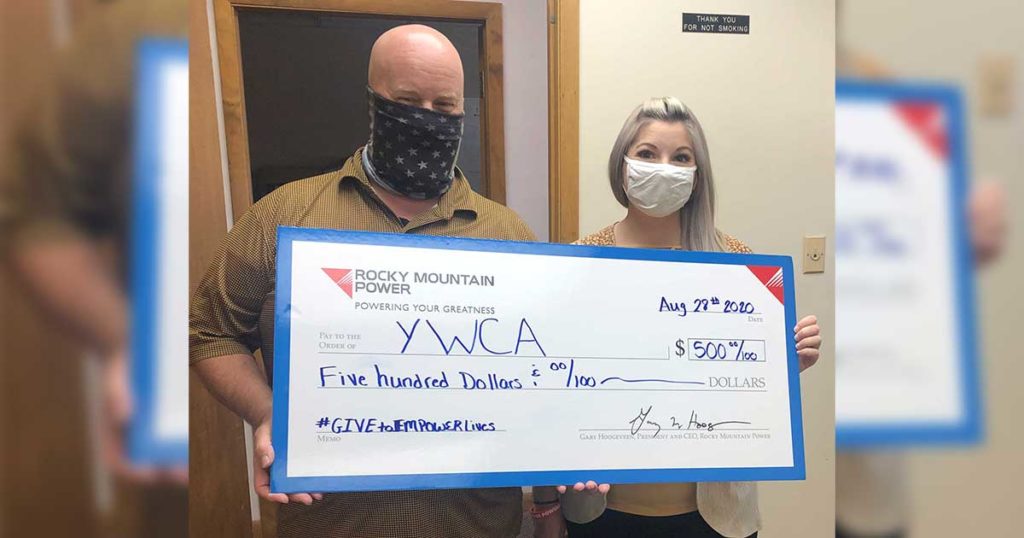 Rocky Mountain Power's Ron Wild presents a $500 donation to YWCA's Kayla Mannikko for the Give to Empower Lives campaign. Photo courtesy of YWCA of Sweetwater County

SWEETWATER COUNTY — On Women’s Equality Day, August 26, YWCA of Sweetwater County put focus on its “Give to Empower Lives” campaign in honor of the women who made a difference in our world.

The donations received during the campaign helping YWCA continue to provide all the services they do along with new programs to help more people empower their lives.

YWCA Sweetwater County’s mission, in its most basic form, is eliminating racism and empowering women. The mission is the reason the organization provides the services they do.  Each of the services offered is based on how it affects women and people of color, but YWCA knows that childcare, or family violence or financial education can affect anyone. So, YWCA always offers services to everyone regardless of race, gender, sexual orientation, or religion.

YWCA started in Fall 2019 full of optimism and ideas of what the fiscal year was going to offer, and then 2020 happened. While the pandemic means services may be offered differently, YWCA is staying on track with their goals.

Rocky Mountain Power helped kick off the “Give to Empower Lives” campaign by donating $500 to YWCA. Among several private donations, the campaign event raised approximately $2,000 to help the organization.

“We couldn’t continue doing the work we do without the support of individual and private donors,” Kayla Mannikko, YWCA Development Director said. “Funds from this campaign will help YWCA support some of the new projects we are doing to help improve our community.”

One of the new projects YWCA has been working on since last Fall is collaborating with the Rock Springs Chamber of Commerce to encourage people to fill out their 2020 Census. The Census is important to Sweetwater County and YWCA in so many ways.

Over the next decade, lawmakers, business owners, and many others will use 2020 Census data to make critical decisions. The results will show where communities need new schools, new clinics, new roads, and more services for families, older adults, and children.

YWCA has also started a new campaign to encourage people to register and vote. This year is the 100th anniversary of the 19th Amendment and over 50 years since the 1964 Civil Rights Act. Each of these Acts focused on voting rights. A foundation of our society is the right to vote.

Be sure to visit White Mountain Mall to see the banners talking about the importance of voting and what issues are important to you as a voter. These banners are part of the YWCA “Your Vote, Your Voice, Your Future Campaign.”

For anyone who needs information about registering to vote, go to the YWCA Sweetwater County Facebook page to find a link.