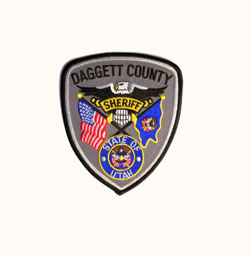 MANILA — Daggett County Sheriff’s Office was called out on June 10th at approximately 8:30 p.m. on an overdue party of rafters floating the Green River below the Flaming Gorge Dam. A party of six adults and five children had failed to meet up with family members at the prearranged location at Little Hole. Daggett County Search & Rescue members joined Daggett County Sheriff deputies under the direction of Sheriff Jerry Jorgensen in checking locations along the river where the party may have mistakenly landed, but were unable to find anything.

Classic Lifeguard’s helicopter was called in to do an overhead visual search to try to locate the raft or occupants at approximately 10:30 p.m. The initial pass of the river gave no sign of the missing party. On the second pass the party was spotted along the bank in a remote area of the river impossible to reach by land, approximately three miles upriver from Little Hole. Classic dropped a couple of their crew to the ground in an attempt to make contact with the party, but because the noise of the river was so loud they were not able to communicate with them. It was obvious the occupants of the raft had gone into the water, and the raft was not visible in the area.

Once the safety of the rafters was established, a decision was made to drop supplies to the stranded rafters to sustain them through the night. Captain Chris Collett of the Daggett County Sheriff’s Office loaded supplies (coats, blankets, fire starting equipment, food and water) in to Classic Lifeguard’s helicopter and dropped them to the rafters with a note telling them they would be back in the morning to get them out.

The next morning (June 11th) at 5:30 a.m. Daggett County Deputies and Division of Wildlife Resource Officer Jack Lytle took two drift boats and a rubber raft down the river to rescue the party. At 7:05 a.m. the rescuers picked up the stranded boaters and transported them down the river. They were all safe and off the water at 7:30 a.m. Although the rafters were cold and suffering from slight hypothermia, there were no injuries.

As this is the second incident in as many days, Sheriff Jerry Jorgensen again warns all people recreating in the area of the current dangers of the Green River because of the increased water release from the Flaming Gorge Dam.