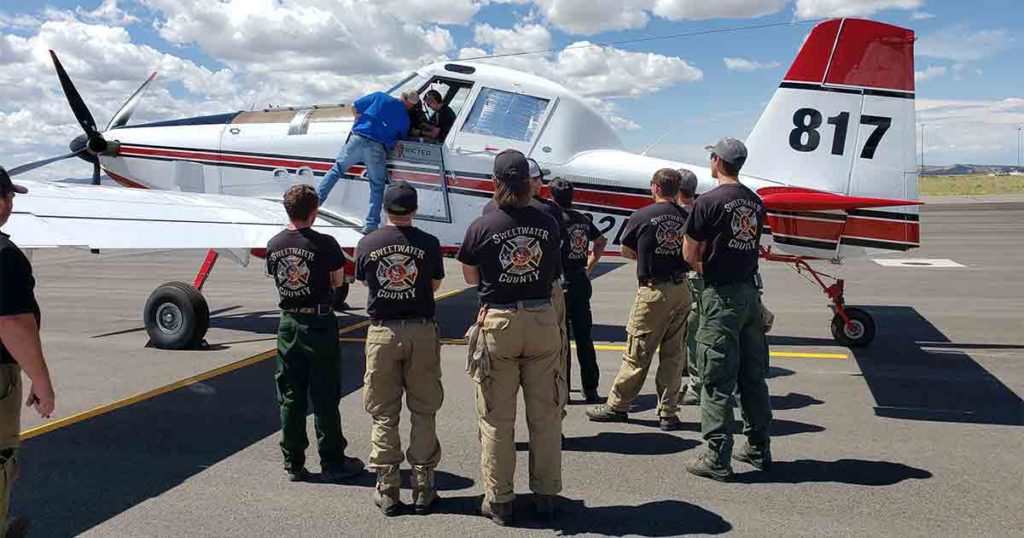 The Bureau of Land Management’s Single Engine Air Tanker base in Rock Springs is now up and running. Courtesy photo

ROCK SPRINGS — Years of discussion about a dream to locate a Single Engine Air Tanker (SEAT) base in Rock Springs has finally become a reality.

The Rock Springs Bureau of Land Management (BLM) SEAT Base, located at the Southwest Wyoming Regional Airport, opened toward the end of June and they have already responded to wildland fires throughout its coverage area.

The facility is located on the northwest side of the airport and is right in the middle of the general aviation facilities for the airport, Airport Director Devon Brubaker said.

Even though the BLM was working for two years developing the project, it was something BLM Fire Management Officer Frank Keeler had as a goal for a long time.

“It’s been on my mind for the last eights years, but I wanted to do it right,” Keeler said.

The BLM had a temporary SEAT site in Rawlins, but Keeler always wanted to put a permanent facility in Rock Springs. One thing standing in the BLM’s way was lack of water to the airport. Even though there is still not a water line going out to the airport, upgraded water systems have allowed this project to take place. Keeler said Airport Director Devon Brubaker made sure upgrades were completed to allow for the base.

Keeler said another obstacle was finding a facility at the airport to put the base in. Keeler said he knew there was one already at the airport. It was rundown and not in the best of shape, but he couldn’t help but think it could work if renovated.

“A couple of years ago, I just threw some seed money at the project,” Keeler said.

The timing couldn’t have been better. It was around this time the national BLM office had decided they wanted to move from mobile SEAT bases to permanent bases. The national office found out about the Rock Springs project and it continued to move forward.

“The national office grabbed it and it just took off from there,” Keeler said.

Here’s an overview of the Bureau of Land Management’s SEAT Base at the Southwest Wyoming Regional airport. Courtesy photos

Keeler said Brubaker and the airport board worked closely with the BLM to make sure everything went through smoothly.

The 4-acre facility includes an aircraft apron, two aircraft loading positions, and six aircraft parking positions. The facility also has a secondary containment structure that houses the retardant and mix tanks as well as the necessary pumping systems to load retardant on the aircraft, Brubaker said.

Adjacent to this area is a storage shed used for housing tools and equipment. A pavilion area for the ground crews to seek shade in between operations is also at the site, according to Brubaker. It also includes a detention pond and stormwater collection system that collects any retardant making its way to the apron during loading operations to ensure it does not enter the environment unintentionally.

There are two places within the base to load aircraft with retardant or water depending on what is needed, Randall said.

It’s All About Location

For this project, it was all about location. The BLM wanted to make sure all SEAT base operations were strategically placed.

This base could provide initial attack aviation resources for three different states, Wyoming, Colorado, and Utah and many agencies that experience a number of wildland fires, Randall said. The base also has  office space, pilot quarters, and additional places for other firefighting aircraft such as air attack and helicopters.

“It will help provide a place for wildland fire aviation resources to quickly respond to wildfires and hopefully be able to keep wildfires small and protect Wyoming lands,” Randall said.

Bournazian said most of Sweetwater County’s wildland fires are less than an acre and over 95 percent of all the starts are contained within the same day. However, there are a few fires that do grow rapidly and aircraft like SEAT’s are the perfect tool to apply in corralling larger fires.

“SEAT’s are very effective for those larger fires in sagebrush and grass,” Bournazian said. “With the SEAT Base being local, the turnaround time to reload and get back to fire is reduced greatly.”

While the facility only opened in June, fire crews have already been utilizing the facility. Keller said the SEATs were used to fight the Gravel fire, which was located about 25 miles from Rock Springs by Highway 191. The planes were also used to help on the Shale Creek Fire near Kemmerer.

Since there are five key positions needed to run the SEAT base, local fire crews are currently receiving the necessary training to help out.

All of those who are close to the project appear to agree the SEAT base facility has been a complete success.

The Rock Springs base itself has become the national BLM’s template to follow for future permanent SEAT base facilities, Keller said.