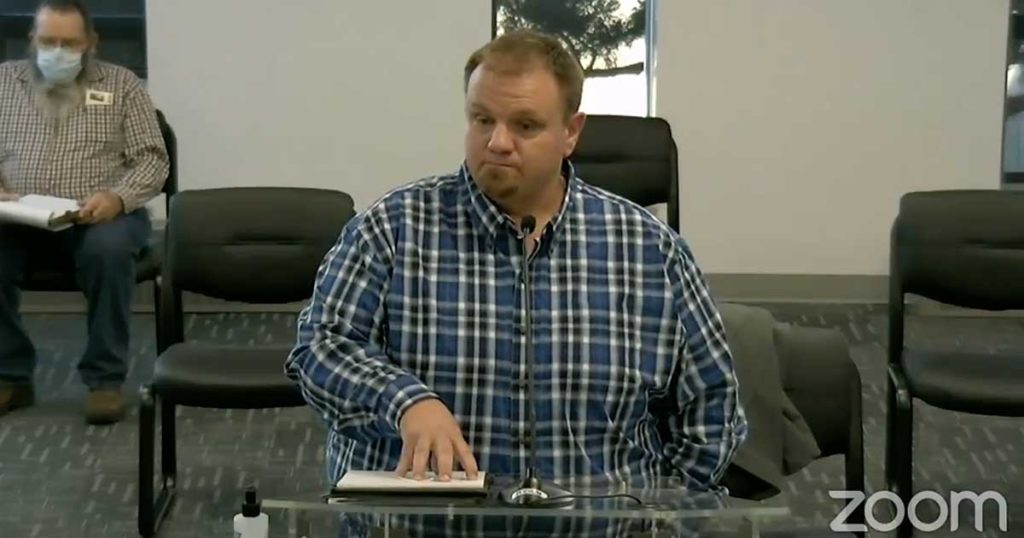 Dan Stanton discusses the recent announcement made by the Sweetwater County Commissioners to terminate the county's ambulance contracts. Zoom photo

SWEETWATER COUNTY — The Castle Rock Hospital District (CRHD) Board of Trustees had a discussion with the Sweetwater County Commissioners today in search of clarity on the termination of the ambulance contracts, effective March 31, 2020.

On December 15, 2020, the Commissioners announced they will be terminating contracts with Castle Rock Hospital District and Sweetwater County Medics for ambulance service as of March 31. The announcement was made with funding amid economic hardships as the reasoning.

At the time of the announcement, the Commissioners made it clear they did not wish to see ambulance services diminish in Sweetwater County.

“We were taken aback,” Stanton said.

Chairman Randy “Doc” Wendling said the simple answer is a bleak financial situation in the upcoming fiscal year. According to Wendling, the Commissioners got a revenue picture in March 2020 that predicted very tough economic times for the county.

“It was a decision based on what our funding was beginning to look like,” Wendling said.

At the time the decision to terminate the contracts was made, the County was looking at a $6 million shortfall in the 12 mil. After an update today by County Assessor Dave Divis and County Treasurer Robb Slaughter, that deficit is now estimated to be around $5 million.

Commissioner Jeff Smith said the decision was made to lessen the burden on the County to support the services, as they cannot “shoulder the burden” by themselves.

CRHD CEO Bailee Dockter said the termination of the contracts at the end of March will be very difficult for Castle Rock, especially amid the COVID-19 Coronavirus pandemic. She said there is an increased need for EMTs and healthcare workers right now.

“There’s no desire to see a single day without ambulance service in the county,” Commissioner Smith said.

Stanton said that in future meetings, he believes it would be beneficial to include representation from someone who provides ambulance services. Chairman Wendling said he agreed, but that they would need to be careful of bringing in people who may have special interests.

Stanton also said CRHD has been discussing one county-wide ambulance service provider, as CRHD has struggled to support this service for years.

“Our board has been trying to divest ourselves of ambulance service for years,” Stanton said.

Dockter said that whether or not CRHD continues to provide ambulance services in years to come, they want to help with finding a solution to ensure Green River will continue to receive the service.