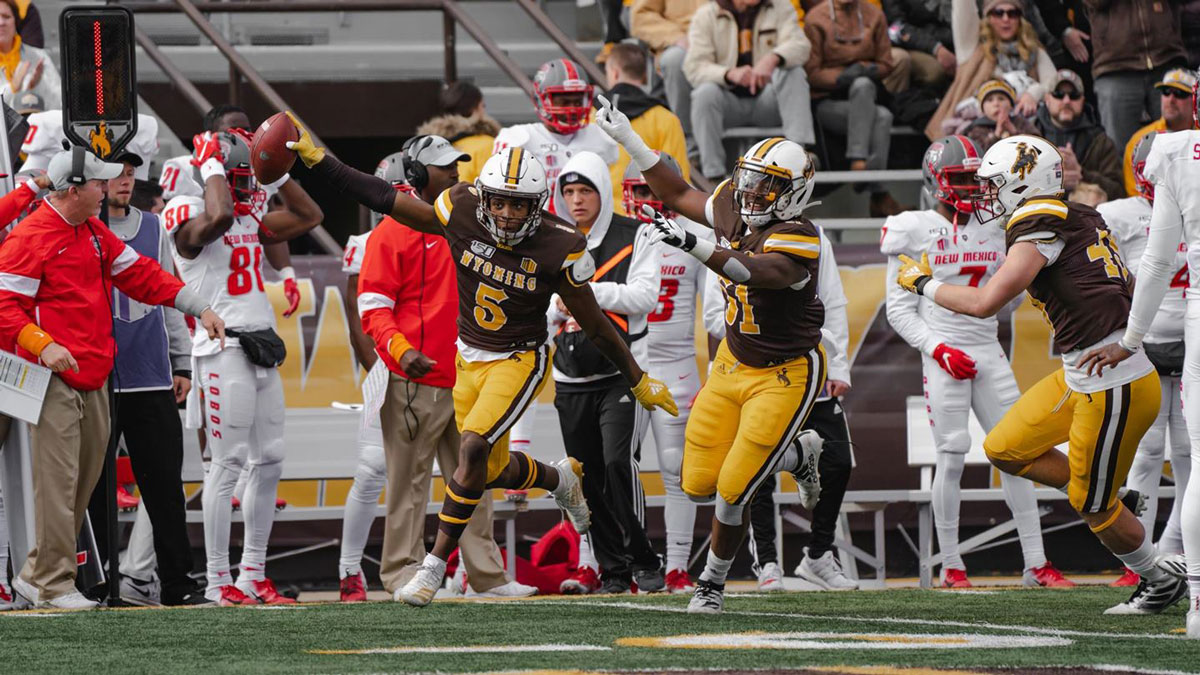 LARAMIE– The Wyoming Cowboys (5-2 overall, 2-1 MW) host the Nevada Wolf Pack (4-3 overall, 1-2 MW) on Saturday at Noon inside War Memorial Stadium. Wyoming has won six-straight home games dating back to last season. Saturday will mark the eighth meeting between the schools with Wyoming holding a 4-3 advantage.

Wyoming can become Bowl Eligible for the fourth-straight season with a win.

The Wyoming Cowboys won their sixth-straight home game last Saturday defeating New Mexico 23-10. Wyoming is 4-0 at home this season and finished last year on a two game home winning streak. Wyoming hasn’t lost at home since Oct. 20 of last season, making the streak over a year long. Wyoming won seven-straight at home from 2015-16.

The Wyoming offensive line was named 2019 Joe Moore Award Midseason Honor Roll. The award is given to the nation’s top offensive line unit. UW is one of only seven FBS teams to have four different individuals record a 100-yard rushing game in 2019. The Cowboys rank No. 15 in the nation in rushing offense in 2019, averaging 236.7 yards per game. Wyoming’s offense is ranked No. 10 in the nation in fewest sacks allowed, giving up an average only 1.00 sack per game (only seven total sacks allowed) for the 2019 season.

Senior Sean Chambers makes things happen on the field. He made his 11th career start against New Mexico and improved his record as a starting quarterback to 9-2 for a 82 percent winning percentage. He is averaging a rushing touchdown per game and 79.6 yards rushing per contest and he has also passed for eight touchdowns. This season he leads the MW and ranks No. 17 in the nation with nine total touchdowns.

The Cowboy passing game paced by Sean Chambers averages 111.1 yards per game. Chambers is connecting on plays when it counts. When Chambers steps back to pass 85 percent of his passes are either for a first down or a touchdown.

The Cowboy defense shutout the Lobos in the first half last week. It marked the second time this season that Wyoming has shutout an opponent in a half, as Wyoming held Texas State scoreless in the second half earlier this season.

The Wyoming Cowboys have seen some injuries, but is show its depth. Wyoming is one of 14 teams in the nation to use 35 or more starters. The Cowboys sport the best record of those teams and are one of four who are .500 or better this season.

The Wolf Pack head to Laramie with a 4-3 overall record and a 1-2 record in the Mountain West. Nevada fell last week at Utah State on Saturday by a score of 36-10. Nevada notched a big win to open the season defeating Purdue at home 34-31.

The Wolf Pack offense is paced by running back Toa Taua, as he averages 73.3 yards rushing per game for the season with a team-high four rushing touchdowns. The Wolf Pack have used three different quarterbacks on the season. Malik Henry started the last contest, as he is completing 53.9 percent of his passes and averages 197.7 yards per game. Wide receiver Elijah Cooks has 33 catches for 393 yards. He leads the team with four receiving touchdowns.