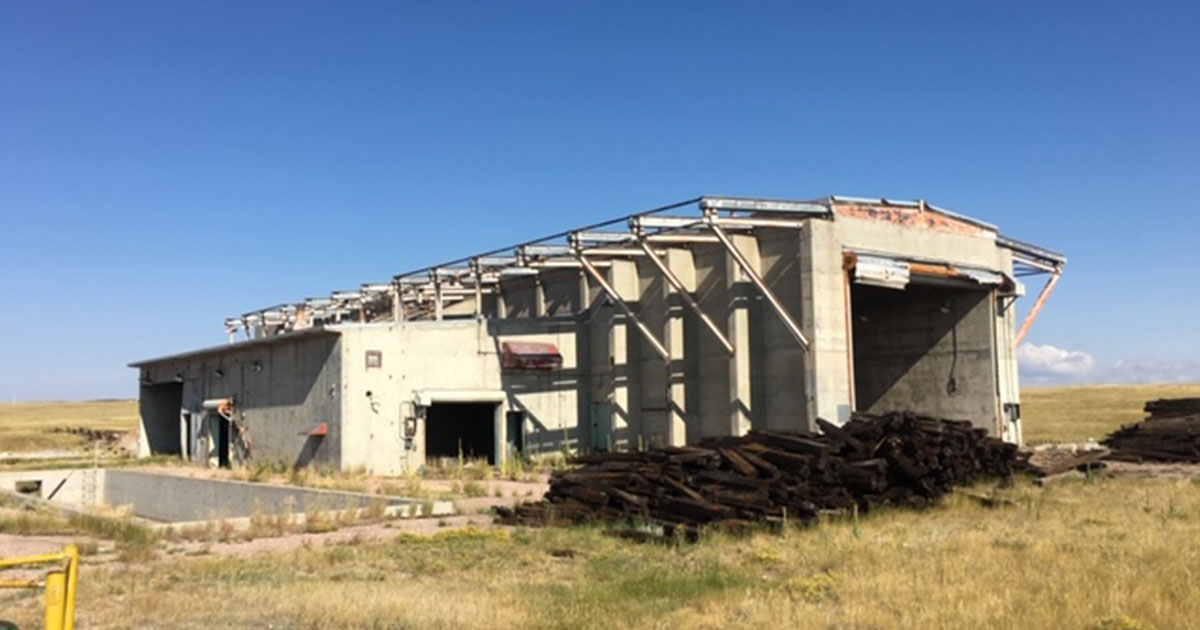 That’s the case with the former Atlas “D” Missile Site 4, just west of Cheyenne. The Wyoming Department of Environmental Quality discovered the water at the site is contaminated with trichloroethene (TCE) in 1998. The U.S. Army Corps of Engineers began its investigations shortly after the discovery.

Missile Site 4 is about 15 miles west of Cheyenne on the south side of Interstate 80, near the Granite Canyon Quarry.

Protecting Health and the Environment

The DEQ, the U.S Environmental Protection Agency (EPA) and the Army Corps of Engineers began working together to determine how widespread the contamination is, as well as how best to contain it and clean it, nearly two decades ago.

Troy Sanders, a project geologist for the DEQ, said, “What we’re really trying to do here is protect human health and the environment. That’s our goal.”

Sanders said the residual TCE was used in the cleaning of rocket fuel tanks, engines and liquid oxygen lines following readiness exercises on the site, which was active from 1960 to 1965.

Water was used to remove the TCE after cleaning, causing the contaminant to flow into unlined waste channels and pits.

Laramie County Commissioner Linda Heath said learning the history of Missile Site 4 and other missile sites is vital for the county.

“If we don’t know where we come from, how can we avoid going there in the future?” she asked.

Heath added that the technology and processes the organizations are developing today can be applied to clean other missile sites, as well.

Sanders said an Army Corps of Engineers team and its contractors, led by Doug Simpleman, is doing the hands-on work to contain and analyze the plume of contamination, and the DEQ is the lead regulatory agency for the project.

The Army Corps of Engineers’ contractors, primarily RMC from Wheatfield, Colorado, do the hands-on work because the missile site is designated a formerly-used defense site under the U.S. Department of Defense.

The EPA designated TCE as a hazardous substance and one that could cause cancer in humans, Sanders said. The detected contamination at Missile Site 4 exceeds the EPA’s maximum contaminant level of five parts per billion.

The Plume is One of the Largest in the Nation

Sanders said the known extent of the plume is approximately 10 miles long and 100-300 feet below the ground surface. He added that Kevin Frederick, DEQ’s Water Quality Division administrator, believes the plume to be one of the largest in the nation.

The City of Cheyenne obtains some of its drinking water from a municipal well field that is within the known location of contamination. The Army Corps of Engineers paid to install an industrial water treatment system at Cheyenne’s Sherard Water Treatment Plant to remove the TCE from the groundwater.

Kathleen Quinn, co-chair of the Missile Site 4 Restoration Advisory Board (RAB), said the Corps recently extended the contract for the treatment system for another five years.

She added that the Army Corps of Engineers’ contractor, RMC, worked with Amec Foster Wheeler out of Denver and Laramie in summer 2017 to obtain further data using airborne electromagnetic surveying to better determine the boundaries of the plume, as well as to locate the leading edge of the plume.

“We were really looking at the eastern edge of the plume because that was basically a matter of public safety. We didn’t want that plume to get to Cheyenne,” Quinn said.

She added that the aerial footage already has provided some important information about the plume.

“You would think as it ran downhill, it would spread out – like when you spill water in your kitchen. But it doesn’t do that, which confirms some paleo-channel or underground pathway for that (contaminant),” Quinn said.

She said some wells will be moved to the northeast side of the plume this summer to help find that eastern edge.

Once that leading edge is located, the Army Corps of Engineers can take proactive action to stop the plume from spreading further.

Cleanup Could Take 200 Years to Complete

Quinn said funding became available to pay Amec Foster Wheeler to analyze the remainder of its collected data this summer. Once the Army Corps of Engineers, the RAB and the DEQ have that data, the organizations will determine the best methods to stop the spread of the contamination and begin the work to clean it up.

While waiting for those results, the Corps, with oversight by the DEQ, continues to monitor the contaminated groundwater plume.

Sanders said the ongoing activities will take time and added that the Army Corp of Engineers estimates it may be 200 years before the cleanup will be complete.