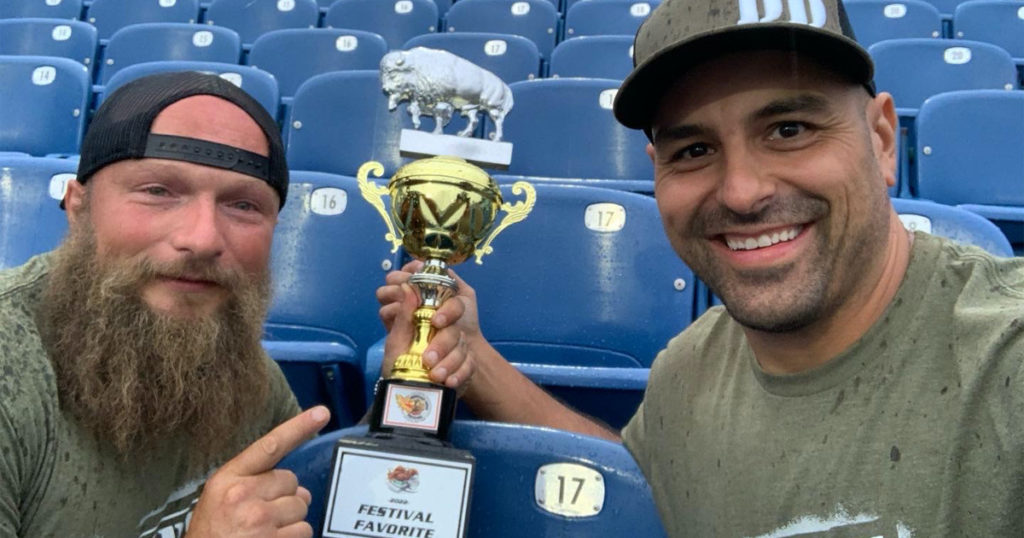 The National Buffalo Wing Festival just wrapped up in Buffalo, New York where chicken wing pros enter their sauces against one another.

Double Dubs came home with more hardware this year, including the Festival Favorite trophy which is about as comparable to winning a Super Bowl in terms of chicken wings.

Double Dubs story began back when company owner Trent Weitzel and Rock Springs Double Dubs owner Dallas Lopez were in college. Weitzel was the mastermind behind the sauce recipes while Lopez took on a role of tasting and giving feedback.

Weitzel eventually began catering his wings to parties and various events. With the growing encouragement of his friends and fellow customers, the first Double Dubs food truck opened in Laramie.

One of Weitzel’s loyal customers was Allen who was the starting quarterback for the Wyoming Cowboys. The two formed a special bond over the wings and have remained in contact ever since.

Weitzel almost immediately made contact with the National Buffalo Wing Festival in those early days and tried to get a foot in the door. However, he was denied entry because only brick and mortar vendors were being allowed to participate. Each year he called and ask to be a part of the event, but the same disappointing answer was given.

Weitzel finally cracked the threshold in 2019 when he asked festival organizers that if Allen vouched for his wings, would they let him in? The festival, of course, agreed.

Weitzel texted Allen and humbly asked for his help, and a short while later, Allen called the festival and recommended they let Double Dubs wings be a part of the festival.

Weitzel’s sauces won three awards and he was named Rookie of the Year that first year. Allen made an appearance at the Double Dubs tent and took home a stash of his favorite spicy blue wings.

“We like to look at it like Josh unlocked the door for us and then we kicked it in,” Lopez said.

Completing their third year at the festival, all three of their sauces placed, taking two second place finishes and a third. Overall Double Dubs has won 11 awards in three years.

The ultimate goal this year was to win Festival Favorite. The judges don’t vote on who receives the honor, but it’s based on who serves the most wings and does the most business. Double Dubs came away with Festival Favorite this year, something they are proud to hang their hat on.

“For the next year we can say we have the best wings in the country,” Lopez said.

Due to his popularity and fame, Allen wasn’t able to visit Double Dubs at the festival this year. But a quick meetup in a parking lot was this year’s location for the exchange of 100 spicy blue wings.

After the wing festival in 2021, Lopez talked to his wife Emily about how they had to franchise a Double Dubs and start one in Rock Springs.

Weitzel was supportive of the idea and Double Dubs Rock Springs opened in June of 2022. The Lopez duo have had great success since opening and love sharing their passion for good wings.

If you’d like to try Allen’s favorite wings or any of their other delicious options, you can check their Facebook or Instagram page for their schedule.