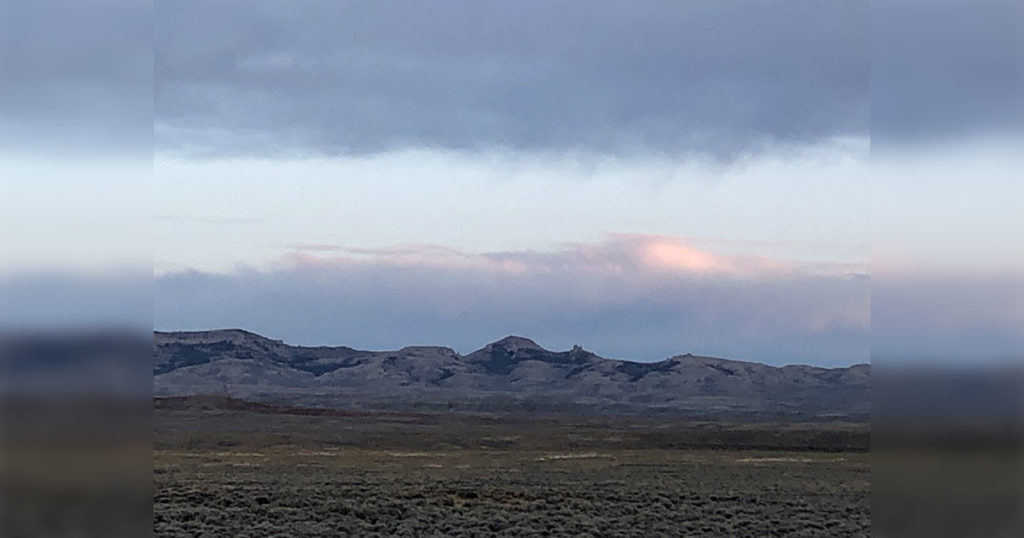 ROCK SPRINGS — I recently made the move to Rock Springs from Colorado to work for SweetwaterNOW. I did my research, but of course, I had to take a leap and come here not knowing a whole lot about the area. The only way to really get to know a place is to embed and explore. Discovering my new home has been exciting, and being the content minded digital journalist that I am, I’m also excited to share some of what I’ve found with our readers.

One thing I’ve learned is that exploring Western Wyoming means exploring on public land, which is a timely topic at the moment. Saturday, September 28 is National Public Lands Day and the first-ever Wyoming Public Lands Day. I’ve been exploring some of that land and finding out why it’s worth celebrating. On Saturday, I’ll head to South Pass City and check out Run the Red Desert.

Meanwhile, I’ve spent the last couple of weekends at some more low key running events. From the desert down the street to a one of a kind canyon in the next county, I’m finding endless adventure in Wyoming.

Two Saturday mornings ago, I found myself running north on Reagan Avenue with an unopened aluminum can in each hand. The cans weren’t makeshift weights, but it’s not a bad idea. Run with a can of beans in each hand for an added workout and then use them for some post run protein?

But no, my jog up Reagan was only a warm-up. I was headed for the Stagecoach Elementary parking lot for my favorite Saturday morning activity, a community fun-run, and fundraiser.

On September 14, the event was Coats and Cans for Kids. This is the second year that local teacher Eric Urlacher and the Knights of Columbus have hosted the race. Raising money and collecting donations for families in need. With a 9 a.m. start time, the registration deadline was 8:45. At 8:48, I set two cans of beans on the registration table and signed up as the third and final participant in the 10k.

About ten minutes after 9:00, 30 or so runners, several strollers and a couple of dogs crossed the sidewalk chalk starting line. We headed down Stagecoach Boulevard and followed orange flagging onto an otherwise unmarked trail, heading toward White Mountain. The 10k course ventured onto some sublime single track that hugged the edges on the first shelf of the mountain. Without the flagging, you’d never know the single track is there until you’re on it. I’d passed right by it without noticing several times on my morning runs.

Good fun and a good cause aside, discovering the single track on White Mountain made waking before 11 on a Saturday worthwhile. Especially after taking a less scenic and more leg-wrecking route up White Mountain’s first incline most mornings for several weeks beforehand. But truth be told, I was also on the job. That’s because running on and around White Mountain means accessing and enjoying public land.

Public lands are fast becoming a personal and professional obsession since I landed in Wyoming. At least parts of Coats and Cans probably took place on public land. I hesitate to write that with certainty because White Mountain sits in the huge swath of Southwest Wyoming that’s a checkerboard of Bureau of Land Management (BLM) and privately owned land.

In any case, recreating out around White Mountain means using Wyoming’s abundant public lands. And I’ve been doing just that every morning I can muster the courage to get a run in before I head to the office. After crossing Summit Drive, the pavement ends, the fun starts and a big brown sign announces that I’m enjoying public land.

Coats and Cans was both my first race in quite a while and my first in Wyoming. It got me excited to get out running and exploring. So this past weekend I headed up to Lander for Run Like a Bighorn. This was an opportunity to see a spot I’ve heard is awesome, get a run in, and do it all on a different type of public land.

While 48 percent of Wyoming’s open is space federally managed, just six percent is managed by the state. Six percent isn’t much in the way of quantity. However, you’d be hard-pressed to beat Sinks Canyon State Park for quality. The Run Like a Bighorn course itself is sadistic, and I mean that as a compliment. The course scrambled up and down both sides of the canyon, finding as much elevation gain and loss as it possibly could.

The uphill climbs would grind even the most intrepid trail runners to a halting trudge. The downhills were a barely controlled stumble back down towards the road. 5.9 miles felt like a marathon and encompassed the full range of running emotions, from exhilaration to a sense of impending doom. If you hate yourself enough to identify as a runner, you need to check out this race.

Sinks Canyon is gorgeous and it wasn’t done with me after the race. Next on the docket was a hike up to Popo Agie Falls as morning turned into a beautiful afternoon on the cusp of autumn.

Before heading back into Lander, we had to stop and see The Sinks that the canyon is named for. The waters of the Middle Fork of the Popo Agie flow underground and disappear for two hours before rising back to the surface a quarter mile down the road.

And, of course, The Rise, where you can easily spend an hour mesmerized by the huge, well-fed trout.

NEXT STOP: THE RED DESERT

Next, I’m curious to spend some time exploring the Northern Red Desert. Where Public Lands Day will be marked by Run the Red Desert. I knew I’d have to check this race out the second I saw a press release about it.

How public land gets utilized is the most important issue in Sweetwater County and Wyoming as a whole. Energy and mining industries operate almost entirely on leased public land. Those businesses are the biggest contributors to Wyoming’s GDP and outdoor recreation is a close second. One of those industries has an uncertain future and the other is growing rapidly. Meaning how Wyoming’s public lands get managed is essential the state’s overall wellbeing.

It’s particularly exciting that Run the Red happens on both state and federal public lands. Like Sinks Canyon, South Pass City is managed by Wyoming State Parks, while most of the area the racecourses cover is managed by the BLM. The wilderness status and character of Sinks Canyon, or national parks like Yellowstone and Grand Teton, is pretty well cemented. Meanwhile, the wilderness status of the three BLM managed Wilderness Study Areas that straddle the boarder of Fremont and Sweetwater counties is more precarious. Run the Red participants will have an immersive experience in those areas as the race traverses a small portion of the approximately 18.4 million acres of Wyoming land managed for multiple uses by the BLM.

Everyone I’ve spoken with on the topic agrees that public land is Wyoming’s most valuable resource, and I’m learning that firsthand. So, whether you’re finding an opportunity to volunteer, joining in on the events in South Pass City, working at Jim Bridger Power Plant or just enjoying Wyoming’s wide-open spaces like you do most weekends, it’s worth spending some time this Saturday thinking about why and how you value your public land.

To learn more about Run the Red (or maybe register) check out the race website.

Have tips for learning about and exploring Wyoming? Get in touch by email: sam@sweetwaternow.com.

Sweetwater County Arrest Reports for May 23